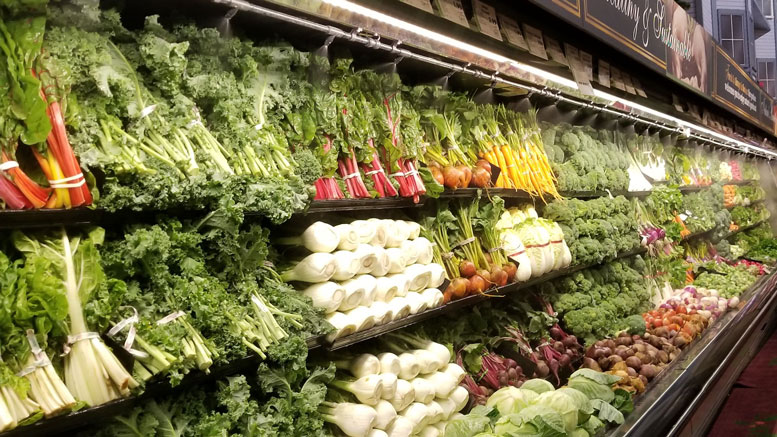 Leading retailers are exploring the next generation of misting/humidification systems, recognizing the value of an ultra-fresh produce department to drive sales and profits and distinguish their brand.

Misting innovations are breathing new life into the retail produce department. Companies are refining the technology, design and operational efficiencies to automate precise water output and product coverage. New systems are critically timed and positioned for optimal humidity, while alleviating damage from dehydrated products or, conversely, saturated ones. The fine mist spray can also build visual theater to draw traffic and impulse buys.

Automatic produce misting systems are not a new technology, but a retail standard — the industry estimates 80 percent of retailers now incorporate misting/humidification equipment in produce department operations. Essentially, every major supermarket chain has invested in the evolving technology.

While chains like Walmart and Kroger are still using Prodew’s traditional misting systems, Shakeel Merchant, Prodew co-founder, sees FogMist (which Prodew launched several years ago) as “the future for this industry.”

FogMist preserves freshness without the wetness associated with traditional misting, and produces a fine fog that enters the air flow of the case to maintain high humidity levels. This concept of fogging has become more and more popular, but each system is different.

The fog engulfs the produce, evenly hydrating leafy greens and other vegetables on every shelf, explains the company’s scientific director, Dr. Nadya Merchant.

“You can put your hand in the produce case when the FogMist system is running, and your sleeve will not get,” Merchant says. “Also, there are no slimy leaves due to over wetting, and no puddles on the ground.”

Kleinberger says FogMist pays for itself and all associated installation and maintenance costs in three months. “Comparing FogMist to traditional misting, we estimate that chains are saving an average of about $20,000 per store per year,” he says.

Chains that use the FogMist system include Publix, Target, Sprouts, Whole Foods, Hannaford, Wegman’s, Amazon, Albertsons/Safeway, Harps, Stater Brothers and others, says Kleinberger. “Even chains that just didn’t buy from us regularly switched once they realized the benefits.”

While produce quality is key to advanced misting technology, so is the customer perception, says Yuri Saiko, vice president of business development at Miatech, Clackamas, OR.

“When misting comes up with consumers, I almost always hear something unpleasant, like, ‘you mean that thing that gets me wet.’ Customers’ perceptions overall about misting can be negative,” says Saiko.

That’s one of the reasons Miatech developed Power Burst, its newest misting system. “It’s timed for 1 or 1.5 second bursts, every minute or minute and a half. It’s light, friendly and looks cool,” says Saiko.

Miatech systems use a low profile, nonadjustable, flat mist bar to keep water off the floor, and eliminate slips and falls. Roughly $500 million is spent each year resolving slip-and-fall events in grocery stores, and many of these are in the produce department, says Saiko.

EASY TO SEE THE SAVINGS

There are many benefits to using produce misting in a wet rack, and the return on investment (ROI) is clear, says Emily Stavrou, vice president, Corrigan Corporation of America, Gurnee, IL. Corrigan has been in business for 42 years, founded by Jack Corrigan, who put his engineering background to good use as an inventor of produce misting.

“The biggest advancement in misting technology has been improvements in nozzle design,” says Stavrou, of the company’s Ultra Mist Low Flow System. “We redesigned a low flow misting nozzle that provides a gentle mist with low water usage.”

She claims it has the lowest flow rate in the industry, using 95 percent less water. “Our controls, coupled with the nozzles, allow for full coverage and equal hydration from top to bottom.”

The UltraMist system has nozzles that easily slide on and off, which allows for flexible merchandising. Non-misted items can be stocked next to misted items in the same case, she explains.

Misting also reduces labor costs, as there is less need for culling, crisping and rotating. No hand-watering is needed.

“The initial investment in our equipment is minimal and the ROI is astonishingly quick,” says Stavrou. “A recent estimate for a large nationwide retailer, factoring an average of only 5.02 percent shrink rate, resulted in a financial return in just two months.”

Retailers report an average reduction in produce shrink of more than 50 percent with misting, but this number varies based on the commodity, says Stavrou.

“One of our recent customers who was new to produce misting reported he weighed the product he was throwing away before and after installing our system. He determined that he saved more than 75 percent in lost product,” says Stavrou.

She cites a white paper published by the La Pine, OR-based Postharvest Education Foundation — Water Relations to Harvested Fresh Produce — to point out the effects of water loss on vegetables. The study shows that leafy vegetables begin to wilt after just a 3% to 5% water loss, says Stavrou.

Tech advances allow retailers to capitalize on the benefits of misting with more commodities, such as bulk mushrooms.

Mushrooms are traditionally not misted as they cannot tolerate moisture, says Kleinberger. Consequently, they dry out quickly and must be discarded — a huge loss, as many gourmet mushrooms are high-ticket items. Prodew has developed a specialized mushroom humidity system and has tested it in its facilities and in grocery stores. Shelf life of portobello, cremini, shiitake, and white button mushrooms increased by up to four days with this system, says Kleinberger.

Prodew’s technology can also be transferred to the floral side. “In normal circumstances, you don’t want to spray cut flowers because you would lose the credibility. To extend the shelf life and color vibrancy, it’s crucial that you create a high humidity, and that’s what the FogMist brings to the table,” says Shakeel Merchant.

“Retailers don’t really mist enough vegetables,” says Corrigan’s Stavrou. “A good example is green beans. A lot of times, I don’t see them under the mister, and they do great when misted,” as do carrots, broccoli, herbs, cabbage and cucumbers, she adds.

In 2020, Corrigan received a patent for the HydraFog Humidification System for small spaces, which Stavrou says is ideal for commodities — like mushrooms — that don’t do well under a mister. “The HydraFog is designed to protect the mushrooms and combat the drying effects of refrigeration.”

Merchant says FogMist customers in Asia noticed a bonus benefit of evaporative cooling. “Even in their nonrefrigerated cases, there was a temperature drop of over 20 degrees F.”

When used in refrigerated cases, he adds, this reduces power use and decreases the cooling burden on the cases.
The FogMist system also reduces water consumption, compared to traditional misting systems, by at least 35 percent, he says, and helps chains meet environmental stewardship goals by conserving water, and also reducing food waste, packaging and energy.

Another notable advancement, according to Stavrou, is Corrigan’s TriOBreeze activated oxygen technology that sanitizes mist bar service cases without chemicals. It is compatible with all misting systems, and extends shelf life of produce by prohibiting mold growth, she says.

What could hamper profits are unexpected maintenance issues. Miatech’s Saiko estimates about 81% of the lifetime costs of misting equipment is actually maintenance, and there are significant financial costs when equipment is down (up to $250 a day due to weight loss and product throwaway, the company estimates).

Stavrou says many Corrigan systems last over 20 years, adding “a quality system has little maintenance.”
When designing systems, she adds, they factor in supermarkets’ heating, ventilating and air conditioning (HVAC) systems, particularly in very open stores. “If the droplet sizes are too small, they can waft out of the case and now they have no longer benefited the product.”