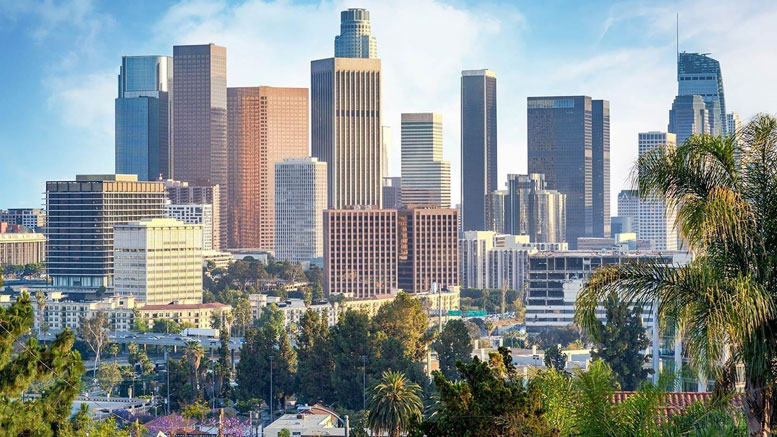 ‘There’s nothing like it in the world’: Geography, diversity and population mean huge potential for growers, distributors and retailers.

A lot of produce pours into and out of Los Angeles — the City of Angels. Positioned on the coast of Southern California, the region is a gateway for produce from the U.S. and around the world.

Los Angeles is a key distribution point on a regional, domestic and global scale for product from California, Mexico and imports from other continents due its key ports of entry by sea and air, says Carrie LaLonde, chief operating officer of Valley Fruit & Produce Co., a Los Angeles wholesaler.

Distributors can easily ship product to San Diego, Phoenix and other areas within a handful of hours. “We, in LA, are strategically positioned on the West Coast to distribute to the coast south and north in a rapid response mode,” explains Jesse Garcia, vice president of sales at LA Produce. “Because of our proximity, logistically, we are close to a lot of the major distribution centers. Seattle, Portland and Salt Lake are all within the reach of Southern California. That proximity makes it a great hub to do business. We are a fountain of produce as far as being very close to the San Joaquin Valley, where there’s a ton of produce.”

“This is one of the largest hubs in the nation,” says Chris Large, sales manager of Torn & Glasser Co., Inc., Los Angeles. “Logistics are convenient, as there’s a savings in freight and transit time.”

The region is also home to a very large and diverse population, Large adds. An estimated 14.1 million people live in the Los Angeles–Anaheim–Riverside statistical area, a 9% increase from 2010’s 12.8 million, according to the U.S. Census Bureau. When you consider the nearly 24 million people who reside in Southern California, it’s a huge market.

And these millions “are significant consumers of fresh produce, and who seek diverse food choices representative of our multicultural demographic,” says LaLonde.

Diversity means business. “We are, first of all, an extremely diverse city,” observes Francisco Clouthier, owner of Maui Fresh International, LLC, a Los Angeles wholesaler. “We have all kinds of different races and ethnicities here. That makes it very interesting.”

“The Hispanic group has five to seven different groups. The Asians are Vietnamese, Chinese, Cambodians and Koreans, who are huge in the produce business. They consume a ton of produce and eat a lot of produce at every meal,” says Garcia. “This makes it to where we can carry many different commodities to accommodate these different groups.”

Growing regions in LA’s backyard help push demand for product within and outside of the Golden State. It is a two- to three-hour drive from Mexico and the Imperial and Central Valleys and within five hours of Salinas Valley. Other nearby growing regions include Ventura, Oxnard, Ojai and Santa Barbara. LA is also just 48 hours from the Pacific Northwest’s tree fruit, and not too far from Nogales, AZ, which means customers can order on a Monday, receive on Wednesday and display on store shelves by Thursday.

“You have a lot of different types of produce that move here,” Clouthier adds. “We have availability and the product is fresh. We can mix with other products that come across the borders and through other means. A customer can come in and load from multiple regions in one area and have a fresher product not on the truck longer than a few hours.”

“Anything within a day’s ride you have a good success at moving, and getting into the bellies before it goes bad, from Canada to Mexico,” says Andrew Bivens, chief operating officer of Westlake Produce Co., Downey, CA. “LA gives opportunities for growers to be able to move product on a quick basis. There’s north of 20 million mouths to feed. You have somewhere to go. Someone’s going to buy it.”

Variety helps with trade of all kinds. “They talk about LA as a world city,” says David Weinstein, director of procurement for Heath & Lejeune, Inc., Los Angeles. “What that means is a huge amount of trade with the entire rest of the world goes through LA. We are seeing products and people and info and ideas coming into and going out of LA all the time. There aren’t really that many places with that extensive degree of connection to the rest of the world. That’s one thing that makes LA different.”

“Los Angeles is still the destination for so much produce, which means buyers can’t afford to ignore what’s going on in LA.”

There are “huge advantages” to being in LA, says Mark Munger, vice president of sales and marketing for 4 Earth Farms LLC, Los Angeles. “From a suppliers’ standpoint, we are in LA because we are at the crossroads of great produce. We are in a strategically unique spot. It’s very easy to get produce here from Yuma, from Nogales, from the Baja. We have the Long Beach Harbor next to us. It’s the size and scope of the city itself. We have a huge population. With all the ethnic groups here, it is really a unique marketplace. There’s nothing like it in the world.”

The proximity helps suppliers such as Melissa’s consolidate and allows for fewer truck stops so buyers can fill loads. “This is the most relevant area to be able to supply retail and foodservice distribution to the highest density population,” says Schueller. “There is no better place situated in USA for produce year-round.”

LA’s connection to the world and agriculture make the area critical for the produce trade. “LA is still the destination for so much produce, which means buyers can’t afford to ignore what’s going on in LA, because the produce companies here have their hands on so much produce,” says Weinstein. “New York, Chicago, Denver, Atlanta, Seattle, Boston, DC — all those places are important destinations for produce. LA serves its community but also ships to Dubai, Beijing, Fiji and Mexico City. It makes for a very different atmosphere.”

Over the years, the supermarket and retail landscape changed considerably.

In the 1990s, the city was the land of independent retailers. Because of consolidation, however, the city became dominated by the large national chains. Then, anti-competitive rules required the chains to spin off stores, which again laid a strong foundation for the rise of smaller, independent operators.

In 2002, the major chains, including Kroger, Albertson’s and Safeway, possessed a 70% city retail market share. Today, they constitute around 40%, according to industry observers.

“We are seeing the independents grow,” says Westlake’s Bivens. “What makes the independents unique is their ability to pivot quickly. When growers are long on fruit and willing to make deals, these small, independent chains can make adjustments, bring it to their warehouses and distribute quickly and make changes at store level fast, passing on the savings to their customers. Time and time again, we are seeing levels of success that come with their ability to pivot quickly.”

There has also been a shift to more ethnic retailers than ever before, observes Torn & Glasser’s Large. “There has also been the addition of natural foods/farmers market-themed stores popping up and pushing out the traditional supermarkets.”

A decade or so ago, one would find chili peppers in LA, but not in every store. Today, every LA retail market and wholesaler carries a line of specialty peppers. “You’re seeing a whole new food and produce pallet emerging from LA,” adds Weinstein. “Because there are a lot more Asian people shopping in LA, there is more bok choy, the napa and other Asian vegetables. You’re not only seeing this in ethnic markets, but across the board, because people in LA are exposed to these ingredients. It will continue to become more elaborate.”

“Beyond the diversity of product is also the diversity of the various segments, across retail and foodservice channels,” LaLonde adds. “Among each highly competitive channel, for example, retailers, there is demand to differentiate, from big-box retailers to regional chains to the diverse independent retailers.”

The diversity of population both helps and challenges business. “LA is a tough market,” says 4 Earth Farms’ Munger. “Because there are so many companies here, we’re all fighting for the same customer. The competition is fierce. Newcomers to LA often underestimate the ferocity of the competition. If competition makes you stronger, it’s one of the reasons there are some really solid companies here.”

Though retail business is now little softer than the previous year, the region’s overall economy is doing well, observes Clouthier. “We are seeing foodservice increasing and retail leveling,” he says. “We are still missing conventions, cruise ships, schools and sport events. Here in Southern California, amusement parks are barely reopening. We still have a lot of upside on the foodservice side of the business.”

The wholesale produce industry, which relies heavily on foodservice, took a big hit during the pandemic, but things are improving, notes Torn & Glasser’s Large.

“From what I can see, it looks like the industry is getting back on its feet after being completely knocked out,” he says. “Foodservice and produce companies are just getting back on their feet, and the outlook is positive for those who were able to weather the storm caused by the shutdown. Retail has grown more recently, and it appears this trend will continue. Things are improving financially, but there’s a huge reconstruction and healing ahead.” 