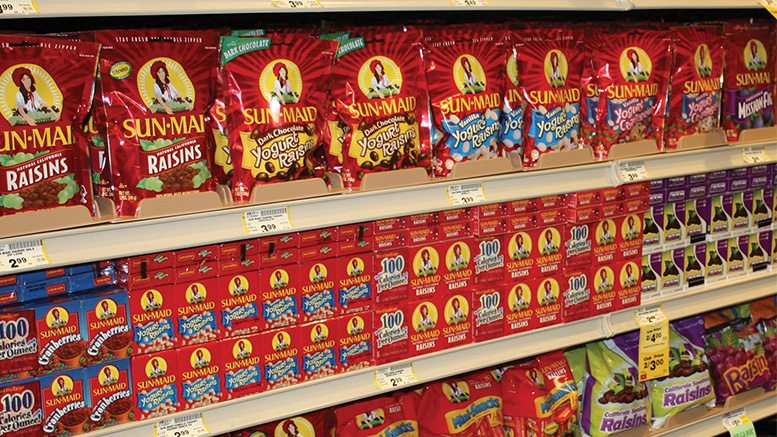 With a growing popularity of new flavors and its well-promoted health benefits, this dried fruit has boundaries opportunities for robust sales. 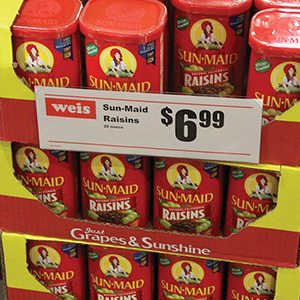 With a focus on health and wellness, and more frequent snacking, U.S. consumption has boosted the popularity of raisins.

According to the California Raisin Marketing Board, Fresno, CA, “3,000 California raisin growers produce 100 percent of the U.S. raisins. Two-thirds of the U.S. raisin production is consumed in the United States and Canada, while one-third is exported to nearly 50 countries, with Japan and the United Kingdom being the top two export markets.”

Redner’s Markets, with 44 stores based out of Reading, PA, reinforces the importance of raisins. “The raisin segment as a whole is right up there on top with our dried fruit category,” says Richard Stiles, director of produce and floral.

LindaKay Abdulian, president and chief executive of National Raisin Company in Fowler, CA, notes total worldwide raisin tonnage has grown 2.1 percent annually from 2011 through 2016, according to statista.com. “U.S. retail raisin sales were down during that time period, but prices were increasing dramatically and much of the available high-demand California raisins were being exported,” she says.

“One of the easiest ways for retailers to encourage raisins/dried fruit purchases is to get it up on display.”

California raisins are respected the world over as the premier raisin in taste, texture and appearance, according to Abdulian. “Much of the available crop has gone to export sales, especially as foreign currency has gotten stronger,” she says.

Consumers are also becoming more aware of the numerous health benefits of raisins. “Raisins are one of the healthiest foods available in stores, with no added sugar, no fat and no cholesterol,” says Joe Tamble, vice president of retail sales execution with Sun-Maid Growers of California located in Kingsburg, CA. “Raisins provide valuable fiber to satisfy hunger and promote a healthy digestive system; and like most fruits, raisins are high in potassium and low in sodium, making them a natural fit for a heart-healthy diet. They are also an important source of antioxidants. Studies have also shown raisins promote healthy teeth and gums. One ounce of raisins is equivalent to one serving of fruit and is less than 100 calories.”

To give consumers more options and reasons to buy, companies continue to innovate. National Raisin Company has introduced Raisels, a “sourlicious” line of flavored Golden raisins meant for kids. The line features Watermelon Shock, Lemon Blast and Orange Burst. “Raisels are not currently in retail distribution, but are featured as fruit servings in school lunch programs and institutional feeding programs across the country,” says Abdulian. “Additionally, Raisels enjoy a significant online presence.”

Golden raisins also play a larger role in the category. “Golden raisins originate from the same natural seedless grapes as traditional raisins; however, they are dried in institutional ovens rather than in the sun,” says Tamble. “They are treated with sulfur dioxide, a safe preservative that has been used for centuries to prevent darkening and preserve vitamins A and C.”

According to National Raisin Company, approximately 10 percent of all raisins sold are Golden. “Golden raisins are the tenth-selling segment in dried fruit, ahead of figs, pineapple, mixed fruit and others,” says Abdulian. “National Raisin category management data suggests Golden raisins enjoy strong sales year-round, and we are working with our customers to increase distribution.”

The Wine RayZyn Company in Napa, CA, has developed a line of crunchy superfood snacks made from premium dried wine grapes called Wine RayZyns (not raisins). “Prior to the creation of RayZyns, there was not a USDA food category for wine grapes,” says Eleanor Cates, vice president of marketing. “RayZyns are a completely new fruit. Common raisins are made from Thompson seedless grapes, which are obviously seedless and thin-skinned. RayZyns are made from premium dried wine grapes, which have seeds and thick skins.”

Cates says RayZyns are important to the produce section because they are a new fruit item and a superfood. “It is not often that a completely new fruit item is available in produce,” she says. “Our products are very exciting for consumers and retailers. RayZyns are right on trend, as they are a superfood with 20 percent daily value of fiber in each 1.6 ounce serving and have more antioxidants than wine. Also, RayZyn snacks are all natural, non-GMO, vegan, gluten free, Kosher certified, naturally sweet, and have no preservatives or artificial flavors.”

Organic products add their own excitement and growth to the category. “One of the fastest-growing areas within the dried fruit category is organics — specifically raisins,” says Tamble. “More and more consumers are looking for food that is pure and simple.”

The organic category for Redner’s Markets continues to grow each year. “As far as raisins, we see our sales in the organic raisin category increasing, too,” says Stiles.

Offering packaging in a variety of sizes boosts consumer choice and sales. The smaller six-pack snack and the mini box raisins are the two biggest items we promote throughout the year,” says Stiles. “We use shipper displays, and we sell quite a bit.”

Sun-Maid Growers has a multitude of products tying-in with the on-the-go snacking consumer. “The Sun-Maid six-pack and mini packages in both raisins and yogurt raisins are the right package for the healthy snacking consumer,” says Tamble. “In addition, the resealable zipper bags of dried fruit are ideal as a snacking package.”

RayZyns also present as on-the-go snacks. “We offer a wide variety of flavors and package sizes to satisfy consumers’ demand.”

A Place In Produce

When promoted with produce, raisins do sell. “Dried fruit is highly responsive to promotions, and fourth-quarter sales peaks coincide to a quieter time for other fruits,” says Abdulian. “In addition, dried fruit has higher velocity in produce than it does when placed in grocery.”

Redner’s Markets sees evidence of good raisin volume when sold in produce. “Even at times where we don’t get a sale deal through our supplier, we will still place them in an ad or just put them in the store at a special sale price because they do sell so fast,” says Stiles. “Raisins are a prime cooking fruit because you can use them in so many different ways, and they are a great healthy snack.”

Sun-Maid Growers partners with many retailers in the produce department to successfully promote raisins and dried fruit as healthy impulse snacks. “Many produce retailers have health-focused initiatives, and Sun-Maid is often a key partner in these programs,” says Tamble.

The shelf-stable aspect of raisins makes them an easy product to manage. “Dried fruit’s shrink is negligible compared to fresh produce, and dried fruit requires no special handling or refrigeration,” says Abdulian.

However, placement of raisins in the produce department is not without challenges. “Many retailers have adopted a ‘green and growing’ philosophy and have limited their produce section to fresh fruits, vegetables, herbs, peripherals and select processed products,” says Abdulian. “In these instances, dried fruit is relocated to center of store, often near baking or canned fruits.”

According to Sun-Maid Growers, more than 20 percent of total dried fruit category dollars are generated from displays located throughout the store, away from the shelf. “One of the easiest ways for retailers to encourage raisins/dried fruit purchases is to get it up on display, including pallets, shippers and end aisle,” says Tamble.

Sun-Maid Growers offers different types of shipper and pallet displays to generate impulse purchases. “These displays are pre-filled and assembled when delivered to retailers,” says Tamble. “The displays provide an easy method for retailers to drive sales and increase basket size with minimal labor costs.”

Promoting is key for maximizing sales. “It’s a sure increase in sales when it is back-to-school,” says Redner’s Stiles. “Sales will peak, and when you get into November and December baking, the Goldens sell well.”

For RayZyan’s, some retailers utilize shippers while others enter into its Wooden Barrel Display POS program, a more permanent display solution. “These displays have been very successful,” says Cates. “They offer flexibility to the retailer and quickly communicate what RayZyn’s are, how you use them and why they are good for you. ”

Cross-promoting is also essential. “It’s important retailers convey messages through cross-merchandising and cross-promoting during in-store demonstrations, retail advertising and consumer messaging,” says Abdulian. “These contacts give consumers a reason to purchase, which will lift sales of all products involved; not just raisins.”