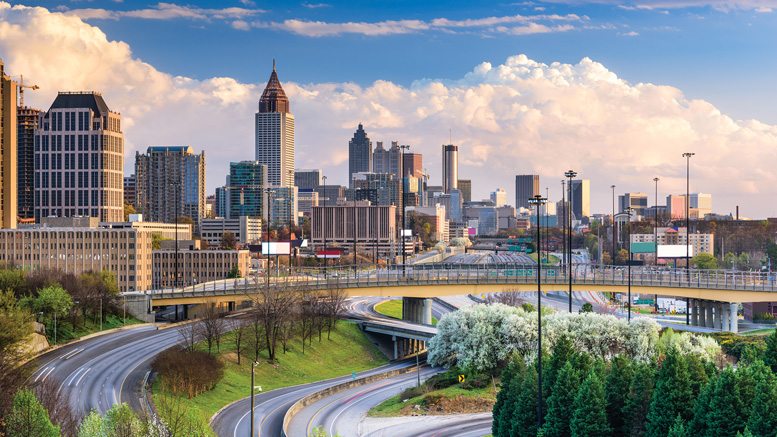 Considered the “Capital of the South,” Atlanta remains on an economic and population roll. 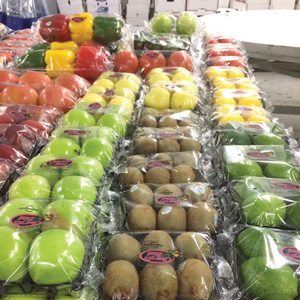 Atlanta hosts a variety of ethnic groups that consume a lot of produce at home and at restaurants. (Photo Courtesy of Nickey Gregory)

The city and region’s growth continues at a high pace as thousands of people pack moving vans to relocate to the Atlanta-Sandy Springs-Roswell metropolitan statistical area. At 5.8 million people, the metro area is the ninth largest in the United States. For the seventh consecutive year, the birthplace of the American civil rights movement has been named the top moving destination by truck rental giant Penske.

“The population is growing and it’s growing quite rapidly,” says Eric Hoffmann, vice president of sales for the Atlanta division of Springfield, IL-based Tom Lange Co. Inc. “There are a lot of people in Atlanta. With that heavy population comes commerce.”

From 2010 to 2016, 502,975 people — more than the 472,522 people who live in the city of Atlanta — moved to the metropolitan Atlanta area, the fourth-largest population gain behind Houston, Dallas and New York. Jobs are what are attracting people to the 29-county region, particularly in the suburbs. The 77,000 jobs added in 2016 were third in the nation, behind Dallas and Phoenix, according to the Atlanta Journal-Constitution.

“The city continues to spread out,” says Andrew Scott, director of marketing and business development for Atlanta-based Nickey Gregory Co., LLC. “Atlanta has many different suburbs, which makes the metropolitan area a big area. More and more people continue to move to the Atlanta area. A lot of Fortune 500 companies have set up shop here and have made this city their headquarters.”

The metro area is home to 16 Fortune 500 companies, including The Home Depot, United Parcel Service (UPS), The Coca-Cola Company and Delta Air Lines, according to the Atlanta Journal-Constitution and the Metro Atlanta Chamber of Commerce.

Wholesalers report the population growth spurs increased produce distribution. “We have seen overall growth in this city,” says Bryan Thornton, general manager of Coosemans Atlanta Inc. “It continues to grow as more people migrate to the southeast and to the Atlanta region. Distribution for produce has also grown.”

Aside from a booming economy and population, those moving to the region enjoy affordable housing and a high overall quality of life. “It’s very simple to live in Atlanta,” says Thornton. “Housing is relatively affordable, and we have four seasons, which is nice, as it doesn’t get too hot or too cold. It’s comfortable to live here.”

According to Chris Garmendia, general manager of Produce Exchange of Atlanta Inc., which distributes from Forest Park, GA, Atlanta has both lifestyle and logistical advantages. “Atlanta is so centrally located. From here, one can hit so many other states in a matter of hours, which is a nice thing. Being in Georgia, you have the comforts of being in the South, which is a plus. I just love the people here in Georgia. They’re great, down-home people.”

The restaurant scene in Atlanta is healthy, says Carl Muth, managing partner of Atlanta-based FoodService Resource Associates LLC, which tracks restaurant activity in the city. “I think it’s vibrant,” he says. “We are a destination location for people, dining and tourism. We have a lot of really good chefs in town. There is also a lot of farm-to-table in Atlanta. It’s been trending that way.”

The strong economy and population growth are ideal for restaurant sales, says Robert Poole, senior sales coordinator for Athena Farms in Forest Park, GA. “It’s amazing how many new restaurants there are in Atlanta,” he says. “There are more openings than closings. That speaks to the health of the city. Otherwise, people wouldn’t be taking the plunge.”

Restaurants are doing well in Atlanta. “There are all kinds of great restaurants popping up,” says Paul Thompson, market manager of the Atlanta State Farmers Market, headquartered in Forest Park. The new SunTrust Park Stadium, home of the Atlanta Braves, includes restaurants around the battery of the stadium, he says. “This is a good place to be. There’s a lot going on now.”

The grocery store business is also strong, and so are the wholesalers distributing to the chains — which range from small independent operations to some of the nation’s leading players — including Kroger, Publix and Wal-Mart. Atlanta is home to a variety of ethnic groups, and produce moves well at the stores and restaurants that serve them. “We are starting to see more retail diversity here, especially Asian and Korean grocery stores, which do well,” says Nickey Gregory’s Scott. “Atlanta is the capital of the Southeast, and many vendors not based in the region sell in the region. To me, you need to have a presence down here. The population growth says people are investing in Atlanta’s growth. It shows that this is a popular city.”

Like with bigger cities, Atlanta’s constant growth is bringing transportation, logistics and distribution challenges. The city is located at the junctions of numerous interstate highways. Those who distribute produce to the metropolitan area’s numerous grocery stores, restaurants, other foodservice venues and eateries report experiencing headaches from voluminous highway traffic.

The economic and population development has brought congestion, which causes issues for trucks distributing produce throughout the region. “This town is horrible with traffic,” says Tom Lange’s Hoffmann. “Getting your trucks around town can be difficult. Everyone heading east or west, north or south anywhere in the Southeast has to go through Atlanta. We have so much out-of-town traffic, commercially and privately.”

The congestion can be daunting. Nickey Gregory distributes to retail and foodservice customers in 11 Southeastern states. “It can be challenging,” says Scott. “We try to get all our trucks out by 3 or 4 p.m., heading them out of town before the traffic becomes too bad.”

Produce Exchange distributes vegetables and apples to retail and foodservice customers in the greater Atlanta area. “Atlanta is a rapidly growing city,” says Garmendia. “Congestion is always an issue. It seems like traffic is bad here any time of the day. But with the city growing, it means more opportunities for us.”>

Many wholesalers, including J.J. Jardina Co. Inc., headquartered in Atlanta, truck produce as far south as South Florida. “It depends, but some travel great distances, especially if there is an opportunity for freight on a return trip,” says Matt Jardina, vice president of general business operations. J.J. Jardina will travel to Miami at times, depending on the volume of freight and will pick up freight on the return trip.

“The airport is a big deal for Atlanta. It is a great place for any sales rep to fly around the country. In produce distribution, you can get to a lot of places around the Southeast overnight. ”

Atlanta possesses some geographic distribution advantages. Jardina points to the Port of Savannah infrastructure, located 239 miles southeast of the Atlanta Produce Terminal, to support imports into the market. “This creates a more local and direct point-to-point service for imports into the region. That creates time savings and some cost savings into our market.” Combined with a growing populace and increasing economic activity helps “all boats rise,” he observes.

A plus for the region is Hartsfield-Jackson Atlanta International Airport. The airport has been rated as one of the country’s busiest. “The airport is a big deal for Atlanta,” says Scott. “It is a great place for any sales rep to fly around the country. In produce distribution, from Atlanta, you can get to a lot of places around the Southeast overnight.”

The airport helps expand the reach of distribution for wholesalers who work out of the Atlanta State Farmers Market. Located on 150 acres on the south side of the city’s metropolitan area, the 24-hour market houses produce wholesalers, a farmers market and a garden center. It is a major distribution and marketing hub that distributes fresh produce throughout the Southeast and the rest of the United States.

Thompson points to its proximity. “We have a great location,” he says. “To be across the street from the airport, and just south of I-285 is a benefit. The ability to get into the city without getting into the city makes this a great place to be. I don’t know if the footprint could be better. We could be larger and could use some more room, but in terms of location, we couldn’t be much better.”

Wholesale movement remains strong, says Thompson. The market remains critical for direct sales or filling shorts via vendors working to provide products demanded by chefs or for operations performing fresh-cut processing, he says. “The wholesale business is going well on the market,” says Thompson. “It continues to grow. We are looking to expand our offerings.”

Viewed as the leading city of the South and one of the most-populated U.S. metropolitan areas, Atlanta has long been a retail supermarket magnet. In the past two years, the metro region has experienced a large explosion of grocery stores. Dozens of stores have opened, or are planning to open in the metropolitan region, according to articles in the Atlanta Business Chronicle. In April 2017, the Chronicle reported on the grocery wars as German-based Lidl and Aldi plan to open a dozen stores in Georgia and four stores in the Atlanta area, respectively.

According to Chain Store Guide’s 2016 Market Share report, Kroger and Publix battle for the top spot in the Atlanta metro area, capturing 25.8 percent and 23.9 percent respective market shares. Kroger operates with 127 area stores while Publix sells through 142. Wal-Mart’s 69 stores earn it an 18.3 percent market share. Its 11 Walmart Neighborhood Markets account for 1 percent of the region’s sales.

“This is a very strong retail scene,” says Andrew Scott, director of marketing and business development for Atlanta-based Nickey Gregory. While in the 1990s, chains including A&P and Harris-Teeter closed their stores, retailers have begun to bounce back, he says. Chains, including Trader Joe’s, Sprouts and Whole Foods, are increasing their presence in the market.

Retail competition in Atlanta remains intense, says Bryan Thornton, general manager of Coosemans Atlanta Inc., in Atlanta. “It has always been competitive,” he says. “During the past 20 years, you have seen retailers come and go. You continue to see that.” Thornton says retailers do well merchandising produce. “Everyone has their own nuances,” he says.

Dollar General increased its store count from 170 stores to 195, with 1.4 percent of the market, while Family Dollar increased the number of its stores from 151 to 169 at 1 percent market share, according to the Chain Store Guide report.

The Atlanta area is a highly developed area with a diverse demographic that offers more local options. Matt Jardina, vice president of general business operations for J.J. Jardina Co. Inc., Atlanta, agrees retail aggressiveness is intense. “It is very competitive,” he says. “Discounters are making some inroads, though many consumers are willing to pay more for better quality.”

The city’s supermarkets seem to be doing more with produce. “It’s more and more of a focus,” says Paul Thompson, market manager of the Atlanta State Farmers Market, Forest Park. “There are more of these stores that you see pop up, whether the Whole Foods, the Kroger’s, the Sprouts or Aldi’s. In my opinion, the produce selections are getting stronger. More people are focused on it. It’s doing very well in the grocery store chains.”