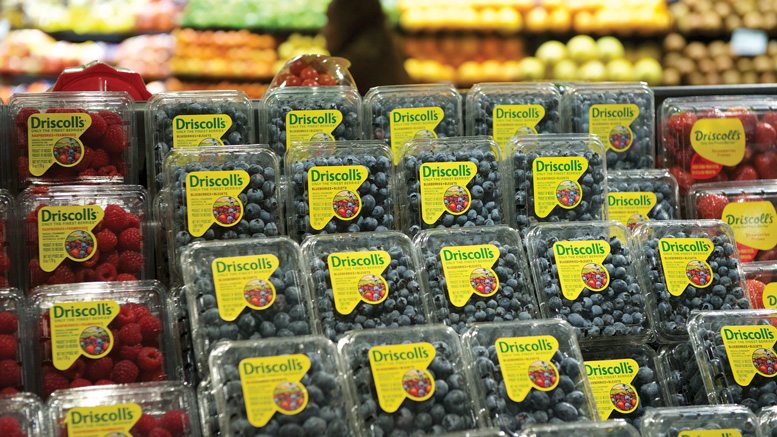 Taste, health benefits and now year-round availability have driven berries to a dominant position in fresh produce dollar sales. In fact, strawberries, blueberries, raspberries and blackberries combined accounted for 9 percent of produce sales for the 52 weeks ending July 1, 2017, according to data supplied by Chicago-based Nielsen Perishables Group. Even during the fall and winter months, when domestic berries are no longer available and retailers rely on imports from nearly a half-dozen countries, sales are still significant. For example, while 31 percent of all berry category sales occurred in Q2 based on Nielsen data, 19 percent, or nearly one-fifth, took place in Q4.

“Imported berries have become a huge contributor to our produce business in the winter — the blueberries from South America more than any other,” says Vic Savanello, director of produce and floral for Allegiance Retail Services, an Iselin, NJ-headquartered company that supports more than 80 independent supermarkets in New Jersey, New York and Pennsylvania under banners that include Foodtown, Freshtown, D’Agostino, Market Fresh and Uncle Giuseppe’s Marketplace.

Improved sourcing and logistics in the past 20-plus years is what has led to the greater supply of imported berries into the United States and fed consumers’ ever-increasing demand, according to Alex Henderson, berry category manager for Southern Specialities in Pompano Beach, FL. “New regions throughout the Americas and new varieties are allowing for even more growth possibilities.”

Going forward, most U.S. berry growers/importers are putting programs in place to gradually close the distance between harvest and consumer, thus ensuring fresher, higher-quality fruit, says Soren Bjorn, president of Driscoll’s in Watsonville, CA. “This is already happening. For example, raspberry production has essentially moved from Chile to Mexico, where they can be trucked to market rather than flown in. Another example is the opportunity to increase blueberry imports from Peru and Mexico over what has traditionally been the main winter sources of Chile and Argentina.”

Two years ago, Driscoll’s began shipping full truckloads of Mexican-grown berries directly to customers in the United States rather than have retailers pick up the product in McAllen, TX. This eliminates an extra step in handling at the border, prevents a potential break in the cold chain and gets a highly perishable product to market faster. Bjorn says last year Driscoll’s shipped 800 truckloads of Mexican-grown berries direct.

STRAWBERRIES. Mexican strawberries, mostly the same varieties grown in Florida and in addition to some organic production, primarily comes into the United States from November to February, says Jim Roberts, vice president of sales for Naturipe Farms, Naples, FL. “If the market is really short, some of the greenhouses in Holland, the Netherlands, will fill in, but this is more the exception than the rule. Or, we may see some strawberries flown in from Chile if needed for the holidays.”

While 31 percent of all berry category sales occurred in Q2 based on Nielsen data, 19 percent, or nearly one-fifth, took place in Q4.

Strawberry production in Mexico has gone from 7.2 million trays during the 2010-11 season to 26.8 million in 2016-17, according to information from Michelle Deleissegues, marketing director for Red Blossom Farms, Salinas, CA. “We are fortunate to have built a partnership with Mainland Farms in Mexico, and this season we’ll cultivate and import 4.5 million strawberries.”

BLUEBERRIES. Peru, Argentina, Uruguay, Chile and Mexico all export blueberries to the United States in the fall, winter and early spring.

“Argentina and then Chile have been great sources for blues in the winter, and now with Peru becoming more involved in this deal, we will have a great opportunity for good volumes of fruit,” says Savanello.

Advances in varietal development and production technologies have enabled growers to cultivate fruit closer to the equator in countries like Peru and Mexico, according to Bjorn. “Peru has the potential to be bigger than Mexico in blueberries.”

Family Tree Farms is in its second year of blueberry production on a 1,000-acre farm in Peru. “By 2022, our Peru production will be at the same volume levels as our Mexico farm; for 2018 we are anticipating Mexican volume at around 18 million pounds,” says Dovey Plain, marketing coordinator for the Reedley, CA-based fruit grower.

Peruvian blueberries start shipment in August and September and fill the need during the traditionally tight fall window.

“Peru has a long season that spans from September to February, or into March. By contrast, Argentina and Uruguay have shorter windows from mid-September to the first of December. The volume out of these two later countries is essentially flat or declining due to weather and logistical challenges. Argentina, for example, must send their berries in by plane, and that means higher cost. They need to work on shipping logistics to remain competitive. However, it’s advantageous for Argentina to get in before Chile as the fall presents a strong pricing window. On another note, both Argentina and Peru do have some organic blueberries.”

Argentina, which ships nearly 65 percent of its total exports to the United States, started updating its varieties in 2012, according to Carla Ginobili, manager of the Argentinian Blueberry Committee in Buenos Aires. “Old materials like O’Neal and Misty are mainly being replaced by Emerald and Snowchaser. So, the key focus here is related to quality and reliability rather than a volume increase. As for volume, the goal is to remain in the plateau of the 15,000 to 20,000 tons of fresh blueberries per season.”

Chile is currently the largest blueberry producer in the Southern Hemisphere, exporting a total of 103,000 tons in 2016-17, according to data supplied by the Chilean Blueberry Committee (CBBC), Santiago, Chile. Of this total, 65.7 percent was exported to North America, the largest global market for Chilean blueberries.

Chile’s peak shipments to the United States start the last week of December and continue into March, says Naturipe’s Roberts. “Some of our proprietary varieties planted there three to four years ago are now starting to arrive. Additionally, there’s a heavy focus on organic berries out of Chile with both new plantings and transitioning ground.”

Mexican blueberry production increased from 4.5 million trays in 2014-15 to 9 million last season, and is forecast to increase to 20 million, says Red Blossom Farms’ Deleissegues. “We will cultivate and import 750,000 trays of blueberries.”

Mexico hits both windows: there is a small fall crop and then a peak in late winter and spring, says Roberts. “This fruit primarily goes to the West Coast, but some reaches the East Coast, although it conflicts with production out of Florida.”

Suppliers say there is no shortage of blueberry-producing countries that are exporting or hope to export, to the United States, such as Morocco, Spain, and Colombia.

RASPBERRIES. Mexico is the major supplier of raspberries to the United States, says Jim Grabowski, merchandising manager for Well-Pict Berries in Watsonville, CA. “Our raspberry deal from central Mexico generally runs from October through March.”

Guatemala is an emerging source of raspberries, says Southern Specialties’ Henderson. “This increased competition should bring prices down and improve overall volumes. However, while raspberries are still a few years away from being reliable as a year-round commodity, there has been increased reliability and demand on a once-difficult-to ship berry.”

Volume out of Mexico, the reliability of flavorful varieties, and better shelf life with packaging improvements have really pushed this item to be one of the main focal points of many retail outlets, says Henderson. “Right now, this berry is probably one of the fastest-growing of the big four.”

Consumers have an appetite for berries year-round, says B&R Stores’ Bohaty. “This doesn’t go away in the wintertime. In fact, as the years have progressed, better availability and quality means more reasonable pricing and promotional opportunities.”

Henderson agrees. “Health-conscious eating habits don’t change with the seasons. Granted, there is still a marketing push during the domestic spring and summer seasons following the retail trend of pushing local products. However, you continue to see berries all times of the year, especially during the winter holidays. For example, Thanksgiving promotions for blackberries and blueberries are on track to be timed perfectly with current harvest projections allowing for some very aggressive ads.”

Packaging is often a clue to seasonality, yet pack sizes from import markets are increasing, says Henderson. “There’s a disappearance of the 4.4-ounce and more 1-pound and 18-ounce clamshells as new regions allow for a steady supply of blueberries. Blackberries and raspberries are both seeing greater 12-ounce packs, but this is still mainly a niche item that hasn’t pushed through to the consumer base the way larger blueberries packs have.”

“Berries should be in a refrigerated display,” says Megan Schulz, director of communications for Los Angeles-based Giumarra Companies. “Displays should be colorful, with a variety of clamshell sizes appropriate for the retailer’s demographics.”

Display promotions and demos are popular with retailers, says Karen Brux, managing director for North America for the San Carlos, CA-based Chilean Fresh Fruit Association. “In addition to running numerous promotions of these, we also started working with Northgate Markets, a 41-store Hispanic retailer based in Anaheim, CA, on their kids cooking program, Miguelitos Cocina Club. In early 2017, the CBBC sponsored classes in all their stores; other sponsors were Dannon and General Mills. Kids made blueberry yogurt swirls and received blueberry activity booklets.”

“Heavier volumes of strawberries and blackberries crossing the border mean retailers can promote aggressively and gain added sales that they never had the chance to before Mexico was in production.”

Price remains a mainstay of promotions any time of year.

“The berry category remains highly promotable during the import season. At least one type of berry should be in the ad each week,” recommends Naturipe’s Roberts.

In January, according to Deleissegues, “heavier volumes of strawberries and blackberries crossing the border mean retailers can promote aggressively and gain added sales that they never had the chance to before Mexico was in production.”

Overall, the difference in price between domestic and imported berries is becoming less apparent. “We are starting to see a steady price on all berries, except maybe strawberries. This is in part due to new regions filling the gaps that were not there a decade ago and new varieties that offer large harvests for a consistent pack size,” says Henderson. “This reliability has allowed the import markets to hit all-time lows two years in a row with blueberries. Of course, the weather is always a factor, and most drastic price increases are due to weather conditions in the prominent production area at the time. As for the overall gap between domestic and imported, it’s almost non-existent.”

In the future, some berries may become very attractive to promote in the wintertime, says Driscoll’s Bjorn. “Berries are primarily defined by strawberries, summer, and low prices. Yet, going forward we’re seeing cost pressures in the United States driven by labor, such as an increase in the minimum wage in California and other factors that are not an issue in other countries. This may mean, for example, that in the next five years labor-intensive fruit like raspberries may become cheaper in the winter than in summer.”