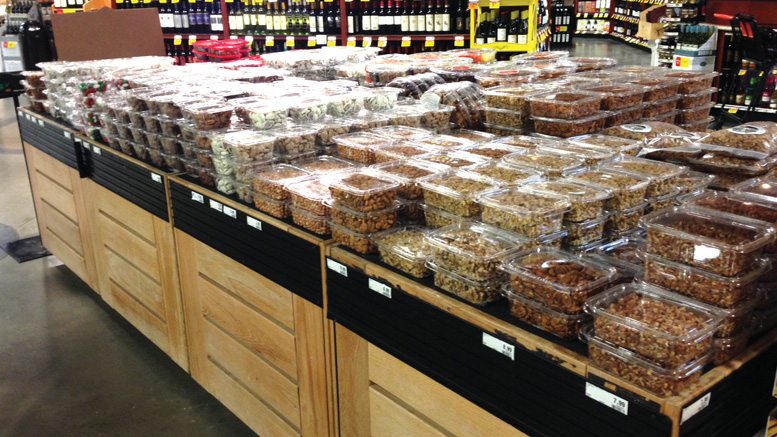 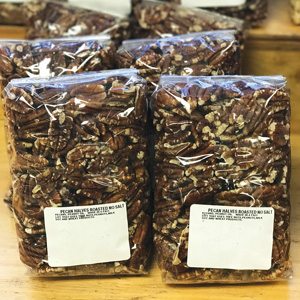 Each year, U.S. farmers grow more than 300 million pounds of pecans — 80 percent of the global supply. And still, nut lovers can’t seem to get enough of them. Demand for the sweet, tender meat of America’s only native tree nut continues to climb as consumers discover the pecan’s healthful properties and versatility. Because as the American Pecan Council says, “There’s nothing the pecan can’t do.”

“We’ve seen the uses for pecans grow as more chefs, bloggers and other influential people learn of their many uses,” says Brandon Harrell, sales manager of Pecans-North America for Golden Peanut and Tree Nuts, based in Alpharetta, GA. “Nuts, in general, have gained market share in the snacking and ‘other’ categories.”

As shoppers look to pecans as more than just holiday baking staples, supermarkets have responded by giving them added real estate in produce departments, positioning them alongside other nuts, dried fruits, and trail mixes. Increased visibility and availability have helped lift year-round sales.

“Our philosophy is if the grocery department can sell them why can’t we?” says Keith Cox, produce category manager for K-VA-T Food Stores, an Abingdon, VA-headquartered chain with stores in Georgia, Kentucky, Tennessee and Virginia. “About 15 years ago, we got to thinking: Let’s do a test, and keep a display year-round. We started to see the movement on them, and how good it was, and each year it’s bigger and bigger.”

Chad Hartman, director of marketing for Charlotte, NC-based Truly Good Foods, concurs on placement: “Year-round in the produce section. It’s really important to merchandise pecans in the produce department as opposed to the baking section. Consumers are looking for them in produce.”

Paul Rich, vice president of sales for Durham-Ellis Pecan Co. in Fort Worth, TX, says when he joined the company almost 15 years ago pecans were only displayed in produce during the holidays. “Now they’re sold there year-round. Nut meats do very well during the holidays, but they do sell the other nine months of the year; and we see a huge spike in trail mixes during the summer.”

“We don’t do a tremendous amount of retail,” says Bruce Caris, chief operating officer of Green Valley Pecan Company in Sahuarita, AZ. “A lot of customers buy in bulk from us, and put it in the bag. But from talking with customers, almost all put it in produce. A natural raw pecan piece or half — get it next to the almonds, walnuts, sunflower seeds and dried fruits, and that’s where you see good sell-through.” 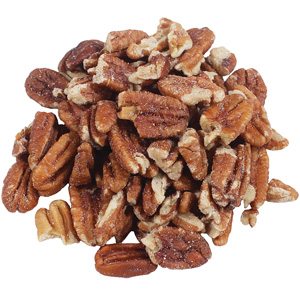 Despite their growth as a year-round staple, pecans are inextricably bound to Thanksgiving and Christmas. In the South, says Harrell, “Pecan pie is almost as much of the holiday tradition as turkey and Christmas trees.”

“We encourage produce departments, as we crack into baking season, to have a table of pecans,” says Hartman. “If someone’s coming in to bake, they need a nut to bake with, and pecans are the go-to nut for the holidays. Most of the time, we encourage retailers to have a large section of pecans, not necessarily stand-alone, near where they have other nuts.”

“The larger the display during the holidays, the better the program does. And I know that some of the stores will put them next to the sweet potatoes, to kind of pair them to holiday-type items.”

According to Rich, size matters. “The larger the display during the holidays, the better the program does. And I know that some of the stores will put them next to the sweet potatoes, to kind of pair them to holiday-type items.”

As this year’s holiday baking season approaches, Green Valley’s Caris says consumers are seeing the highest priced pecans that they ever have. Back-to-back short crops and a small carryover from the previous growing season have helped create what Rich also calls historic high prices. “We’re hoping this coming fall for a bigger crop to help lower prices,” says Rich.

When prices rise, pecan distributors tweak their offerings with the shoppers’ wallets in mind. “What we’ve had to do is rather than selling 8-ounce packages, we go to 7 ounces, or 6 ounces, to accommodate the price point,” says Rich.

Thomas L. Mason, chairman of the Tifton, GA-based Georgia Pecan Commission and general partner of Mason Pecans in Fort Valley, GA, says, “You don’t want to raise the price to where it kills the market. You want something the consumer can afford, and farmer can afford to grow.”

Packaging is another important driver of pecan sales. Rich says “fresh packaging” — where it looks as if the retailer has packaged the product — has proven popular. “We do very little branding on our end,” he says. “We want to make it look like it is being done in their [supermarkets] back room.” He says the convenience of resealable packaging — from bags to clamshells — has also resonated with consumers.

“It kind of started as a snack trend,” says Hartman. “Everything you see out there is re-sealable. It’s that convenience thing. It’s about making things easier for the consumer. People like the convenience of grab-and-go.”

From the supermarket perspective, clamshells “look neater and stack easier,” says K-VA-T’s Cox. “And they give a much fresher appearance to the package.”

Pecan halves and pieces remain as popular as ever, but the industry has actively been adding new products and encouraging consumers to “think beyond the pie,” a slogan of the Georgia Pecan Commission.

Green Valley Pecan Company now offers an organic line through its Santa Cruz Valley Organic Farms. Family owned since the 1940s, the company is committed to sustainable farming, says Caris. “There’s a good demand for organic pecans. We’re seeing most of the distribution through the natural foods stores, and a lot of that is in the bulk bin program.”

Among Truly Good Foods’ new pecan treatments is a line of praline pecans in a snack bag. Sales have been “excellent,” says Hartman. Pecans also star in the Truly Good Foods’ trEAT4u line, a range of 1-ounce snack mixes designed to meet a number of nutrition and health criteria.

Mason says the commission is working to get pecans into a larger variety of products and is encouraging research and development that explores other flavor profiles. “We’d like to get these companies thinking more about pecans than about other nuts.”

The pecan industry’s efforts to promote the nut’s nutritional benefits are key to its strategy to increase market share.

“The health factor of nuts in general, with pecans leading the way, is certainly advantageous as people in the United States are eating what I’d call smarter and healthier in most cases,” says Mason.

In 2003, the FDA approved this qualified health claim for pecans: “Scientific evidence suggests, but does not prove, that eating 1.5 ounces per day of most nuts, such as pecans, as part of a diet low in saturated fat and cholesterol may reduce the risk of heart disease.” A 1-ounce serving of pecans has 18 grams of unsaturated fat and 2 grams of saturated fat.

“The American Heart Association approved heart-healthy labeling for pecans a few years ago,” says Harrell, “and landmark research showcasing pecans highest in antioxidants has been getting recognized lately.”

Pecans are just as heart-healthy as other tree nuts, according to the American Pecan Council. “But what makes pecans unique is they contain phytonutrients, specifically flavonoids (10 mg. per ounce), at levels comparable to some superfruits. Pecans also contain gamma-tocopherols, a form of vitamin E (7 mg. per ounce),” says a council spokesperson.

The Georgia Pecan Commission shows off the pecan in healthful, sweet and savory recipes on its website. There are twists on the traditional: Dominick’s Upside Down Pineapple Pecan Pie. And takes on the trendy: Toasted Georgia Pecan-Quinoa Breakfast Bowl. But the message is clear: There are many ways to enjoy the pecan.

“Most people just think of a pecan pie on the holidays,” says Georgia Pecan Association’s Mason. “Pecans are so much more than a pecan pie.”