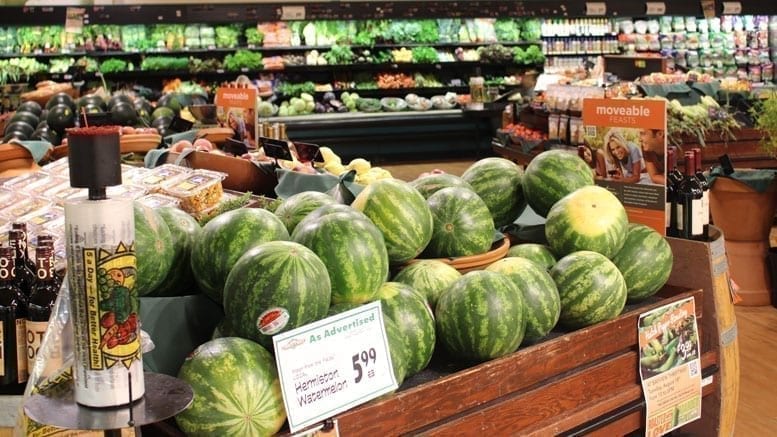 The wide use of color breaks is characteristic of the pride Ralph’s Thriftway and its sister store, Bayview Thriftway, take in merchandising fresh produce. “Produce is a pivotal thing with us,” says Nathen Conat, who manages both stores. “We are doing a lot more fresh than before. People want freshness. It’s not always about having something super-cheap. It’s about having the best.”

Every other week, the stores refresh entrances and use the critical zone to promote fresh fruit. Changing things up and giving different looks to the stores’ entryways prevents shoppers from walking by and overlooking displays they’ve become accustomed to, says Conat. “My goal is to always look fresh and be ready to go every day and have the best quality product out there for our customers,” he says.

While many competitors receive produce weekly, product is shipped to the Thriftway stores six times, sometimes seven times a week. “We may be a little more expensive, but our produce is always fresher,” says Conat. “Our produce lasts longer in shoppers’ fridges.”

While a teen in the 1920s, Ralph Stormans began working in the grocery industry at Piggly Wiggly stores. In 1944, he opened Ralph’s Food Center across the street from the Safeway he managed in Olympia. Over the years, the original store morphed into different remodels and name changes. In 1952, the site housing the Bayview Thriftway store, in Olympia’s downtown, was acquired. In 1992, it was remodeled and expanded. From the 1950s through the 1990s, Stormans opened other stores, which were closed or sold.

Ralph Stormans, who died in 2003 at 94 years of age, worked with his son Ken Stormans, who is retired. Today, Ken Stormans’ children run the business. Kevin Stormans is president, while Greg Stormans and Charelle Foege are vice presidents. Like themselves, their children, the fourth generation, have all worked at the stores.

Ralph’s is between 4th Avenue and State Street, two of Olympia’s major thoroughfares, inside the city’s Eastside neighborhood. Bayview is next to a yacht club on Budd Inlet, a part of Puget Sound. Ralph’s demographic is mostly middle class, while Bayview leans a little more toward upper class.

Competitors, including Safeway and Fred Meyer, are a couple of miles from Ralph’s. With new construction, Olympia’s downtown is experiencing revitalization, which should affect the demographics of both stores, says Conat. “This area will be more big-city living,” he says. “People who live in the city won’t have to drive three miles to shop somewhere when there’s a store next door.”

Ralph’s sells in a 38,000 square foot store, while Bayview is 26,000 square feet. Each carry about 1,000 stock-keeping units of produce. Major wholesale suppliers are Charlie’s Produce in Seattle and United Salad Co., in Portland, OR.

Fortified by large displays of organic vegetables, salads and fruit, the organics category constitutes about 40% of the produce departments’ sales and increases every year.

“Local is huge,” says Conat. “We love that we can sell produce right out of our backyards.”

A pear display may sit adjacent to heirloom organic citrus, while bright red tomatoes mingle with dark green avocados. “It is really important to have those breaks and not have the same colors next to each other, which may lead to blandness,” says Conat. The beauty of colorful displays stops shoppers in their tracks and prompts them to purchase the produce, he says.

SHAKING UP THE AISLES

Shaking up the produce department is vital. To prevent shoppers from becoming complacent from always finding their produce in the same spots, Ralph’s and Bayview relocate items every year or so. “We like to change things and give our produce departments a different look,” says Conat. “It gets people to think where are these items, and it allows them to find some different things they didn’t see in that spot last week.” The relocations also allow produce workers to better engage with customers.

Forward customer service is also good for business. The stores’ workers go out of their way to provide customers a friendly shopping environment. When a shopper cannot find an item, employees don’t only point to the aisle. They walk them to the item. As when Ralph Stormans ran his stores, customers are greeted upon entering.

Stormans remained dedicated to his store and customers. Even at 80 years of age, he would visit his stores and refresh the milk display. “His dedication to the store and his love of the community were just amazing,” says Conat.

Department cooperation is indispensable to the Thriftway stores’ success. “We have a different philosophy from others,” says Conat. “We don’t think of only ‘my’ department. We are involved in the whole store and consider how what we do in our departments will make the entire store better.”

The departments piggyback on successful product sales by cross merchandising in other store areas. “You want every department to be successful,” says Conat. “It’s a team effort, not ‘my department doesn’t care what you are doing.’ Each department is a small business inside a larger business. We want the meat and deli departments to survive as much as we want my department to thrive. When all do well, it’s good for business.”