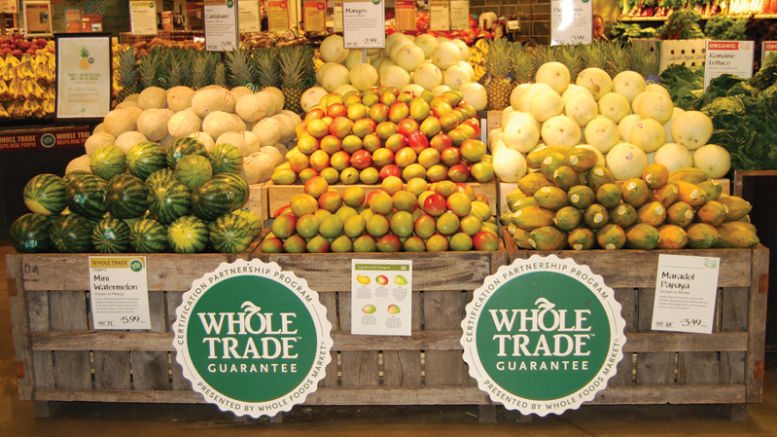 Industry experts discuss regulations and how the trade is navigating the sea of consumer demands.

Organic fruits and vegetables reign supreme over all other organic food items. According to the Organic Trade Association, Washington, D.C., organic fruits and vegetables continued to be the biggest-selling organic category in 2014, up 12 percent from the previous year and comprising more than 36 percent of all organic food sales. Of all produce now sold in the U.S., 12 percent is organic — a market share that has more than doubled in the past 10 years. Sales are particularly robust for organic value-added produce.

Shoppers looking for cleaner and greener have been supporting organic produce for decades. But until recently, it was hard to know what organic meant because different states had different criteria and regulations. In the 1990s and early 2000s, the federal government stepped in with the Organic Foods Production Act (OFPA) to establish national organic standards and prevent mislabeling and fraud.

The National Organic Program (NOP) of the U.S. Department of Agriculture (USDA) Agricultural Marketing Service oversees the verification of 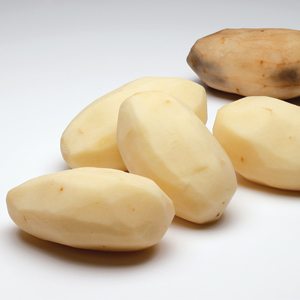 White Russet potatoes in the forefront compared to a conventional Russet Burbank.

organically grown agricultural products, including standards for production, handling, labeling, and enforcement. Informing and making recommendations to NOP is the National Organic Standards Board (NOSB), a 15-person volunteer Federal Advisory Board.

According to NOP, organic farming in the U.S. focuses on renewable resources, soil and water conservation, as well as management practices that restore, maintain and enhance ecological balance. Organic fruits and vegetables cannot be treated with synthetic substances not on the organic national list of synthetic substances. The NOSB notes on its website that “organic agriculture practices cannot ensure that products are completely free of residues; however, methods are used to minimize pollution from air, soil and water.” Products bearing the USDA organic seal have been certified to meet NOP standards. “The USDA organic seal is highly reliable,” says Laura Batcha, chief executive, Organic Trade Association, Washington, D.C. “It has more oversight and enforcement than any other third party claim and applies to organic produce sold in the U.S. but grown anywhere in the world.”

Start With the Seeds

Organic fruits and vegetables must be grown from organic seeds, annual seedlings, or planting stock, and seeds and planting stock can be treated only with approved substances. Seeds also cannot be genetically engineered. 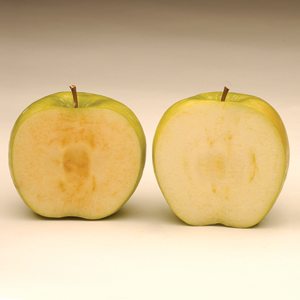 Exceptions can arise when organic seeds are not commercially available. “Before introducing non-organic seed, producers must document contact with three organic suppliers. If seed is not available in the desired form, quantity or quality, growers can use untreated, non-GMO seed,” explains Caitlan Reilly, crop and livestock certification coordinator, NOFA-NY Certified Organic, LLC , Binghamton, NY. “We try to be sensitive to that, but also look closely to ensure that they are working to increase organic seed usage by trialing organic seed varieties, saving seed, and other actions.”

“Third party auditors are more restrictive than regulatory auditors, because the private sector wants to go above and beyond what the government might offer.”

“Organic seeds tend to be more expensive for the farmer and may not offer the same disease control and agronomic factors as a particular non-organic seed,” says Carly Scaduto, senior communications manager, vegetables, Monsanto, St. Louis, MO. “Organic farmers can and do use conventionally produced seeds when organically produced seeds for resistance to devastating diseases, for example, are not available — especially if they have no other means of controlling the disease.”

The Right to Know, or Not Know, About GMO

The federal government currently does not require mandatory labeling of GMOs. H.R. 1599, a House bill passed in July 2015 — dubbed the Deny Americans the Right to Know (DARK) Act by labeling advocates — continues the voluntary FDA evaluation and labeling process for GMOs and required USDA list of GMO plants that can be sold as food. The bill preempts mandatory GMO regulation and labeling by states and does not require companies to list GMO ingredients. A companion Senate bill is pending.

Some major grocery chains favor GMO/non-GMO labeling. Wegmans states on its website that it is in favor of a national standard for labeling non-GMO 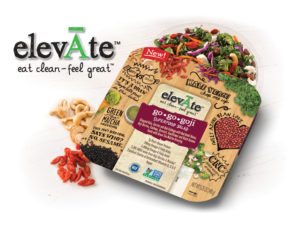 As non-GMO choices continue to be relevant, marketers explore how to incorporate those commodities into new product lines.

items so that consumers wanting to avoid GMOs can do so. Publix believes that FDA and USDA should define GMO, GMO-free and non-GMO. Both chains recommend certified organic products for those looking to avoid GMOs.

The third-party Non-GMO Project verifies non-GMO foods and provides a Non-GMO Verified logo to place on packaging. The Non-GMO Project contends that USDA organic inspection alone does not adequately address risks such cross-pollination and contamination. Among the thousands of verified foods are fresh fruits and vegetables from several dozen producers. Non-GMO has become the gluten-free of the produce department in that it represents quality and purity in the eyes of the consumer. “The value of the designation is clear — new products seeking non-GMO verification outpaced new products seeking organic certification,” says Clayton Ryon, operations manager for Santa Cruz-based Awe Sum Organics. “For us, certified organic plus non-GMO verified is the best combination.”

“Today’s shopper values transparency, and non-GMO verification makes it easy for them to know what they’re buying.”

“Our elevAte line of superfood salads combines nutrition, freshness, and indulgence with affordability, non-GMO, organic and gluten-free,” says Tristan Simpson, chief marketing officer, Ready Pac, Irwindale, CA. “As non-GMO choices continue to be relevant, we will explore how we can weave them into other product lines.”

The Arctic apple, developed by Okanagan Specialty Fruits, Summerland, British Columbia, Canada, is one of two GMO produce items recently approved by the federal government. The Arctic apple is genetically altered to prevent browning after being cut. It is the target of a campaign by Friends of the Earth and other environmentalists that asks food companies such as Wendy’s, McDonald’s and Gerber to pledge not to sell or use the apple.

“While Wendy’s states they do not currently carry any genetically engineered apples or have plans to do so at this time, there is no plausible reason why they would state otherwise,” says Neal Carter, president, Okanagan Specialty Fruits. “Our Arctic apples are not yet in the marketplace and won’t be widely available to consumers for some time. It would be at least a few more years before a large enough supply of Arctic apples would be available to satisfy the requirements of a major restaurant chain.” Also approved for cultivation is the White Russet — developed by the Boise, ID-based vertical integrated company specializing in seed production, farming, fertilizer manufacturing, frozen-food processing, and food brands and distribution, J.R. Simplot Company — using genetic modification without introducing non-potato genes.

“There have been issues with fresh produce in the past — organic and nonorganic — because they are easily contaminated. We often eat them fresh, so harmful bacteria may not be destroyed.”

“White Russet potatoes bruise less and have fewer black spots, so retailers can offer a higher quality potato and customers can enjoy more of what they pay for,” says Doug Cole, Simplot spokesman. He explains, with fewer rejects due to bruising, fewer resources can be used to achieve the same yield, which means farmers generate fewer CO2 emissions, and use less water and pesticides. White Russets also have less of the compound that turns into potentially harmful acrylamide when certain foods (including potatoes) are cooked at high temperatures. GMOs are widely acknowledged to be safe. The FDA states that, based on data on more than 150 genetically engineered foods, foods from genetically engineered sources are as safe as conventional foods. According to the Environmental Protection Agency (EPA), biotechnology’s plant-incorporated protectants have reduced by more than a third the use of synthetic insecticides, resulting in less contamination and less pesticide residue in food.

Third-Party Inspection and Oversight Are Essential

“Federal and state government will never have the resources necessary to do the required annual inspections and certifications, so they rely on third party auditors,” says David Gombas, PhD, senior vice president, food safety and technology, United Fresh Produce Association, Washington, D.C. “Third party auditors are more restrictive than regulatory auditors, because the private sector wants to go above and beyond what the government might offer.”

“We inspect our certified operations every year,” says Caitlan Reilly, crop and livestock certification coordinator, NOFA-NY Certified Organic, LLC, Binghamton, NY. “Each operation goes through an initial review, inspection, final review and decision on their certification status.” Certifying organizations audit at least 5 percent of an operation’s products each year for residues of prohibited substances. Confirmed violators can be fined up to $11,000 per violation/suspension/revocation of organic certification.

No Intersection Between Organic And Non-GMO

Today’s breeding falls along a spectrum from traditional methods to technology-aided breeding to genetic modification. In the produce world, genetically modified organisms (GMOs) are fruits or vegetables that have been genetically altered with DNA from another organism to introduce features such as disease resistance or herbicide tolerance.

Any fruit or vegetable bearing the USDA organic logo cannot be GMO. “Genetic modification that is not possible under natural conditions or processes is not accepted in organic production,” notes NOFA’s Reilly.

Regulations prevent a food’s label or advertising from suggesting that non-GMO foods are safer or of higher quality than GMO foods. Furthermore, nearly all fruits and vegetables in the produce department are non-GMO, with the exception of about 10 percent each of the zucchini and yellow squash crops, a small percentage of sweet corn, and three-quarters of the Hawaiian papaya crop. Hawaiian papayas face continued threat from papaya ringspot virus; the introduction of a transgenic papaya in 1999 is credited with saving the industry.

Concern has been expressed regarding contamination of organic produce by GMOs. The USDA National Agricultural Statistics Service 2014 Organic Survey estimates crop loss of $6.1 million from 2011 to 2014 from contact with GMOs. Accidental contamination is not a risk, however, for most fruits and vegetables. “The main crop of concern is field corn, because it is pollinated by the wind,” explains Reilly.

Organic Is Not Necessarily Safer

While organic pertains to cultivation of fruits and vegetables, it does not guarantee food safety or nutrition. “Safety may be the most pressing concern regarding organic,” says Sharon Palmer, RDN, author, Plant-Powered for Life. “There have been issues with fresh produce in the past — organic and nonorganic — because they are easily contaminated. We often eat them fresh, so harmful bacteria may not be destroyed.”

“Organic and safety are not synonymous, because organic is not a food safety choice,” says David Gombas, PhD, senior vice president, food safety and technology, United Fresh Produce Association, Washington, D.C. “That said, FDA has not reported any recent organic produce-related outbreaks attributable to crops managed under the NOP standard. In the produce industry, the safety of incoming fresh produce is the responsibility of each step in the supply chain.” He notes that any foodborne outbreaks and illnesses linked to produce sourced in or imported to the U.S. have been due to the presence of microbiological pathogens, not to pesticide residues.

Tests conducted on more than 3,000 conventional and organic produce samples by the California Department of Pesticide Regulation found that at least 93 percent of tested California-grown produce had little or no pesticide residues in the years 2010 to 2014. Only 1 percent of samples exceeded the established tolerance level and 5.5 percent had traces of non-approved pesticides. In contrast, the Environmental Working Group’s 2015 Shopper’s Guide to Pesticides in Produce reports that nearly two-thirds of the produce samples tested by the USDA in 2013 contained pesticide residues.

“You have to monitor product safety in both conventional and organic items,” advises Dr. Gombas. “Serious outbreaks occur, and they often result from things that nobody could have predicted.”

The Science Behind Taste Profiles and Experience