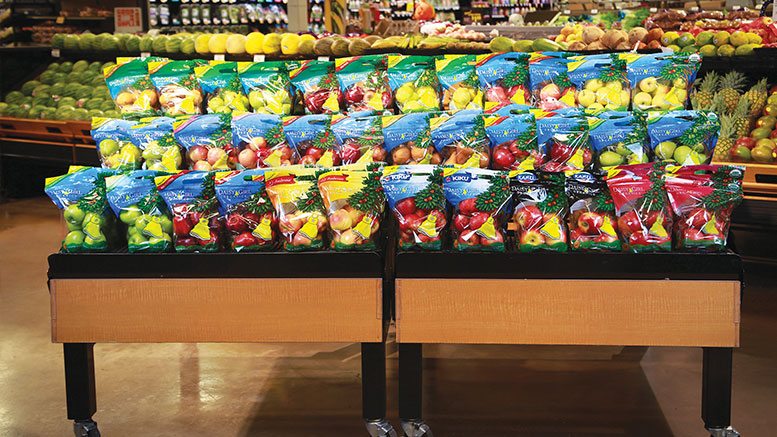 The category is growing in both supply and demand. 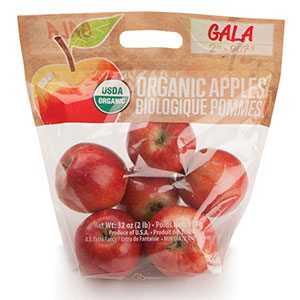 With fresh crops of apples arriving in supermarkets, produce executives are making way for bins and bags of crisp, sweet, and tangy organics. As consumer demand for all things organic continues to soar, the apple industry is taking steps to ensure bountiful future supplies of America’s favorite fruit, from Ambrosia to Zestar.

The 2016 Certified Organic Survey, released in September 2017 by the USDA National Agricultural Statistics Service (NASS), ranked apples as the top organic produce commodity, with sales of $327 million, up 8 percent from 2015.

“Organic apple production is definitely growing,” says Mike Preacher, director of marketing and customer relations for Domex Superfresh Growers in Yakima, WA. “In 2014-15, Washington state packed 9.6 million 40-pound boxes of organic apples. According to the Washington State Tree Fruit Association’s 2017-18 forecast, that number will be 13 million this season. At Domex Superfresh Growers, we expect our own organic apple crop to increase 50 percent or 60 percent this year.”

In a report on the state of Washington’s organic apple industry, David Granatstein, sustainable agriculture specialist at Washington State University in Wenatchee, WA, says growers are responding to market signals by increasing their organic acreage year over year. “In 2016, about 2,000 acres of newly certified land came on line, with more than 4,000 acres in transition,” Granatstein writes. “An industry survey done in January 2017 led to an estimate of 8,500 transition acres in process (to be certified in 2017 or 2018). As we approach the 2017 harvest, real-time acreage estimates are being made by the Washington State Department of Agriculture, Olympia, WA, the main organic certifier in the state, as orchard blocks move through the initial certification process or the renewal process. The January survey suggested that some 4,000 new acres were intended to become certified in 2017, representing a 25 percent increase from the 2016 harvested area. An acreage report on Aug. 14, 2017, suggests that we might exceed that estimate slightly. An additional 5,000 new acres are expected for 2018.”

CMI Orchards, Wenatchee, WA, is increasing acreage for its popular Daisy Girl organic line at a “faster-than-industry rate,” according to George Harter, vice president of marketing. “We feel we are well-prepared for the future. That’s a good place to be, with the customer going in the same direction.”

“The organic numbers don’t tell the whole story about our industry and its crop protection practices,” says Cynthia Haskins, president and chief executive of the New York Apple Association, Victor, NY. “While it is very difficult to grow organically here due to the moisture stemming from rain and snow, apple growers pioneered the practice of integrated pest management. That means our growers use a wide variety of tools — cultural, mechanical, biological and chemical — to scout for and then manage those pests when they find them. They use chemicals (synthetic or natural) as a last resort to protect trees and their fruit, and then in the smallest amounts possible. When they do use them, all growers follow strict instructions governing their use.”

“There are a few Michigan apple growers who grow organically,” the Michigan Apple Committee, Lansing, MI, writes on its website. “Michigan has a moist climate that is attractive to pests and diseases that can be difficult to combat.” 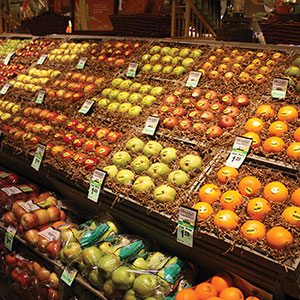 “We generally find they are complementary, but as availability increases across the retail landscape, more families are buying organic apples,” says Preacher. “Organic apple sales represent approximately 10 percent of overall apple sales dollars, according to IRI/FreshLook for the 52 weeks ending Aug.6, 2017, and 6 to 8 percent of volume. I expect these percentages to increase with our expanding crops.”

“For consumers to make that move — to strictly organic, or sometimes organic — it is not as hard on the pocketbook as it used to be. ”

In its Organic Market Overview, the USDA Economic Research Service says, “Consumers prefer organically produced food because of their concerns regarding health, the environment and animal welfare, and they show a willingness to pay the price premiums established in the marketplace.” And organic apples still come at a premium.

“For the 52 weeks ending Aug. 6, 2017, the average organic apple retail was $2.26/lb., down 5.2 percent. The conventional apple retail average was $1.61/lb., down 2.5 percent. So, there is still a significant gap, but we are seeing that start to converge,” says Preacher, citing Chicago-based IRI/FreshLook data.

Keith Cox, produce category manager for K-VA-T Food Stores, Abingdon, VA, parent company for Food City, calls the narrowing price divide “a great thing.” “For consumers to make that move — to strictly organic, or sometimes organic — it is not as hard on the pocketbook as it used to be,” he says.

Harter says CMI is even seeing more organic sales in more economically challenged markets. “People are looking for solutions. Consumers see organics as being a healthier choice. There’s science to support the fact that organics are healthier. Of course, produce is the healthier solution, regardless of whether it’s conventional or organic. It goes after the core problem, which is we’re eating too much junk.”

“Organics are the fastest-growing category we have,” says Cox. “Apples are a part of that. With that being said, it’s not a huge part of our business. But it’s a part of the business you have to be in just because of the way the trends are going.”

One of the innovations in organic apple sales has been the introduction of the 2-pound pouch. It’s convenient to display, pick up and carry. Sales data is more accurate. And the price point is right. CMI’s Harter says the bag is competitive with the 3-pound bags of conventionally grown apples, while introducing consumers to a “different eating experience.”

“We were the company that developed the 2-pound pouch,” says Harter. “It’s been very successful for a lot of reasons. First is the convenience for the customer. They don’t have to take the time to go to the roll bag and go through the apples, or pears for that matter. They can pick up the bag and put it in the cart and go.” According to New York-based Nielsen scan data, Daisy Girl is the top-selling branded organic apple package in the United States, says Harter.

“Two-pound pouch bags have helped energize organic apple sales,” says Preacher. “They allow retailers to clearly highlight the apples and convey information about the product. Additionally, they reduce potential pricing confusion at the register, since they have UPCs.”

Harter agrees. “Pouches are much more accurate in getting the sale recorded correctly. The bag with the UPC code quickly goes over the register when you’re checking out. There are no questions as to what that apple is. You get good scan data. That degree of accuracy is very important with organics.”

Another advantage of the pouches and bags is that they virtually eliminate the possibility of co-mingling.

“If you have an organic item that is not packaged, and it’s next to a conventional apple, for example, once it touches the conventional, it’s no longer considered to be organic,” says Cox. “So there are some concerns about co-mingling. If it’s not packaged, you’ve got to have a barrier in between.”

For all their advantages, the pouches do come with a potential downside for some organic shoppers.

“It’s kind of a fine line to decide if you want to purchase the organics in packaging or not,” says Cox, “because most of your diehard organic users are very in tune with the environment. Every piece of packaging means there’s potentially something that’s going to go into the landfill, or packaging that will need to be recycled.”

Produce executives have their own approaches for promoting and most effectively merchandising organic apples. Some retailers present conventional alongside organic, but Preacher says most “are carving out clearly marked organic sections in their produce departments. And most are dedicating footage to that.”

Whatever the strategy, it must be deliberate, says New York Apple Association’s Haskins. “A consumer’s shopping experience strongly influences his/her purchase decisions, as fresh produce is often a spontaneous purchase. It is important for marketers to merchandise apples, both organic and conventional, in a manner that attracts consumers. Point-of-sale messaging should build consumer trust in organics, such as making sure apples marked organic also bear the USDA Organic certified seal,” she explains.

“Consumers shop with their eyes, so catch their eye with color breaks. Make sure fruit is properly handled at store level, which is essential in maintaining fruits’ high quality and shelf life.”
— Cynthia Haskins, New York Apple Association

“Whether conventional or organic, the layout and visual appearance of apple displays play a major role in the offering of fresh apples. Consumers shop with their eyes, so catch their eye with color breaks. Make sure fruit is properly handled at store level, which is essential in maintaining fruits’ high quality and shelf life,” says Haskins.

“Tap into consumers’ strong demand for local foods. Consumers want to know where their food comes from, such as which farm and the farmer’s name. Consumers want a great shopping experience, and part of that experience is to help them feel good that they are helping farmers and their communities — organically grown or conventionally grown,” says Haskins.

As they survey the organic offerings in produce departments, shoppers will find an apple for every use and taste. New varieties are rolling out — Stemilt Growers out of Wenatchee, WA, is marketing its Rave apple — and others are in development. But so far, the stalwarts head the pecking order.

“In the United States, the Top Five selling organic apple varieties are, in ascending order Gala, Fuji, Honeycrisp, Granny Smith and Cripps Pink. For the 52 weeks ending Aug. 6, 2017, organic Honeycrisp sales were up a whopping 36 percent, and Galas were up 18 percent, so those are the two hottest items in terms of pure sales increases,” says Preacher.

According to CMI’s Harter, the Honeycrisp is king. “That apple will continue to be a consumer favorite.” In terms of regional preferences, Harter says “generally, you’ll find more of the combination of a sweet and tart flavor profile selling better in the East, and a sweeter apple in the West.”

“I don’t think there are varieties of organics that are more popular because they are organic. What we see more of is consumer demand for varieties from New York state,” says Haskins. “We receive calls from across the country from consumers looking for particular New York apple varieties. The common theme is that they are looking for New York-grown apples. Consumers are willing to hunt down their favorites — organic or conventionally grown.”

It’s all good news for apple lovers, says K-VA-T’s Cox. “The new crop of apples are starting to roll out, so consumers will be getting a fresh crop — that’s always a good thing.