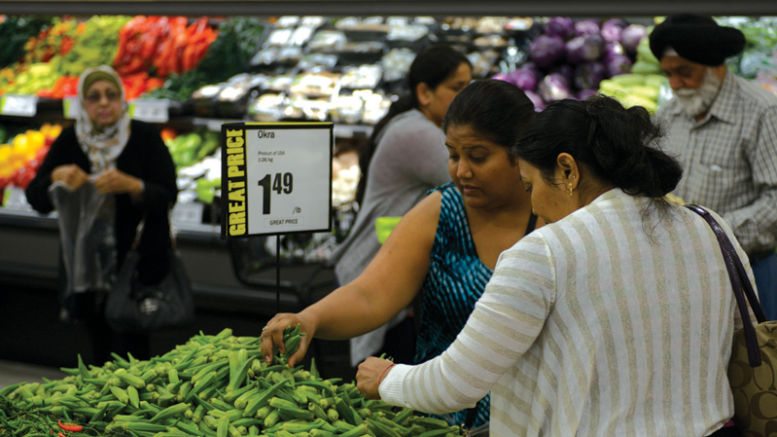 Malaysian, Portuguese, Korean, Armenian, Filipino, Sri Lankan, Polish, Somali … the list of Toronto’s immigrant communities goes on. As the largest city in Canada, Toronto is also its most diverse.

In fact, Toronto, located in the province of Ontario, is the most culturally diverse city in North America, says Virginia Zimm, president of the Ontario Produce Marketing Association (OPMA). “The number of different demographic pockets in this city is amazing — evidenced by the ethnic ma-and-pa green grocers in each neighborhood.”

In his Fresh Taste Produce showroom at the Ontario Food Terminal (OFT), Christian Sarraino picks up a cactus pear and shows it to a customer in the market. “Part of the challenge of selling 150 varieties of fruits and vegetables from 25 countries,” he says, “is educating the public — and retailers too — about the less-familiar commodities. It’s all about marketing the health benefits.”

That is where Zimm comes in. As president of the OPMA, she promotes fruits and vegetables on the association’s website. “Very often, consumers will ignore an unfamiliar fruit, because they don’t know what to do with it,” says Zimm. So the OPMA created a website called Produce Made Simple, to teach consumers how to select, store, and prepare fruits and vegetables. There are recipes too.

Toronto’s cultural diversity presents many exotic vegetables to discover. East and South Asians make up the largest ethnic groups in Toronto’s overall population. That is no surprise to Manpreet Singh, who owns Indian Foodland, a small supermarket and tandoori grill in Brampton, Ontario.

Singh buys his produce from different vendors at the OFT, where he finds the mainstream items like cauliflower and spinach as well as Indian okra and bittermelon. His business’s success comes not only from recognizing this specialized need, but also in knowing his own cultural circle.

“The ethnic communities were all servicing their own demographic with ma-and-pa green grocers,” says Zimm, “until the big boys said, ‘Wait, we should be doing this.’”

Sobeys recognized the need to cater to the local South Asian population with its August 2015 opening of the 50,000-square-foot Chalo! FreshCo. in Brampton, Ontario, says Rob Adams, general manager, discount format at Sobeys Inc. The location was chosen “based on the high South Asian population in the community, their existing familiarity with the FreshCo. brand, and our familiarity with catering to this market.”

Chalo! FreshCo. — Chalo means “Let’s Go!” in Hindi — is the company’s biggest discount grocery store in Ontario, explains Adams. In addition to the store’s regular food offerings, there is also a restaurant and thousands of South Asian grocery products including fresh specialty produce. “Now, they can find the popular and unique products that they regularly look for and enjoy in one convenient location.”

In 2013, Sobeys teamed up with British celebrity chef Jamie Oliver, who says Canada holds a place in his heart. In late 2015, he opened Jamie’s Italian Yorkdale in Toronto, his first restaurant in North America (with plans for more).

Oliver is selling his products at Sobeys and promoting healthy eating with “Jamie’s Harvest Produce Pick,” in which he highlights a fruit or vegetable and makes serving suggestions for shoppers on POS material. One Sobeys shopper surrendered, tweeting: “Every time I walk into Sobeys, the 7-foot cutout of Jamie Oliver scares the bejeezus out of me. Fine, I’ll buy more produce.”

Working for a small upscale retailer with two stores, Joe Guzzo-Foliaro says he has an advantage over the larger chain retailers. “It’s the personal touch,” says Guzzo-Foliaro, a produce buyer for Summerhill Market. He has the time to visit produce wholesalers daily and hand-select the best produce, while the produce buyers at retail chains must make most purchases over the phone.

When it comes to staying ahead of the weather and its effects, Gambles Produce offers weekly market reports to identify current market conditions on major produce commodities.

“The retailer can use it to explain to customers why prices are high and it gives them credibility, because they are knowledgeable on a global scale,” says Jeff Hughes, Gambles’ president. “Our marketing department helps us be proactive rather than reactive.”