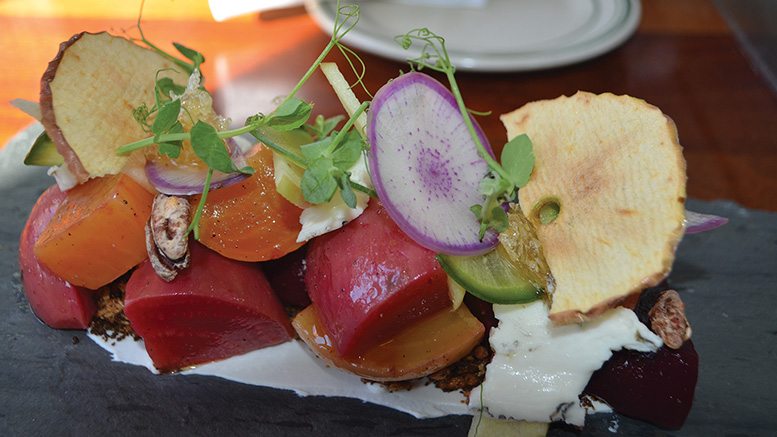 Curating one of the largest tinned seafood collections in New England, raw bar and restaurant employs produce to complement the vast array of dishes.

“Boston fancies itself a trendy city, so we see a lot of foodservice operations pushing the trendiness envelope,” says Stephen Clark, director of government affairs for the Massachusetts Restaurant Association in Boston. “Most pick an interesting name and offer something innovative such as cool cocktails or tinned fish — something to attract attention. This has been happening in the city, but we’re starting to see the suburbs adopt it as well.”

Stepping through the door of Saltie Girl, located in Boston’s traditional Newbury Street neighborhood, is like passing through a portal to a parallel dimension filled with visions of mermaids, ships and fish. The small space’s nautical hip vibe appeals to Millennials, many of whom dine at the sleek bar or nestle into comfortable booths.

The restaurant’s “novelty” is a plethora of tinned fish options served with delectable custom-made accoutrements. “We are a seafood bar serving tinned fish, caviar and seafood in all incarnation — crudo, fried, baked, smoked and New England specialties,” says Kathy Sidell, owner. “We opened in June 2016 and have been met with great acclaim.”

Sidell’s inspiration for the restaurant came from legendary Barcelona (Spain) tapas bar, Quimet y Quime. Yet, she and Kyle McClelland, executive chef, have managed to put a successful Bostonian mark on the concept. Indeed, since Saltie Girl’s opening, the restaurant has made numerous “Best Of” lists, including Boston Magazine, Thrillist and the New York Post.

Clark says the restaurant represented the state in the 14th annual Great American Seafood Cook-off in Louisiana in August 2017. “There was a chef representing each state,” he says. “Chef Kyle won second place for his dish.”

Though one might not associate produce with a seafood bar, the restaurant employs produce to quite successfully complement its seafood. “Produce is a key component of each dish,” says McClelland. “It accounts for 30 percent of the menu ingredients. We spend approximately $2,000 a week on produce.”

McClelland says sourcing decisions are made on quality over cost. “We want the freshest possible,” he says. “We are looking for the optimal seasonal availability. We want the best possible produce, knowing where it is grown and when it is grown.”

To optimize freshness and innovation, the restaurant tries to buy as frequently as possible, and prides itself on using unique items and pairings. “We attempt to source unusual varieties in beets, apples and carrots,” says McClelland. “We choose our protein and marry the produce to it, picking varieties that complement the dish.”

The operation receives weekly updates on availability from its vendors, including Baldor (Chelsea, MA), Sid Wainer & Son (New Bedford, MA) and Specialty Foods (Boston). “Our vendors give us the best possible produce and great local options when in season,” says Sidell. “Through them we have resources and items available we otherwise wouldn’t have.”

Saltie Girl’s menu changes seasonally and contains a wide variety of types of plates, all incorporating produce. “In addition to the tinned fish selections, we serve our delicacies up in toasts, small plates, large format and dishes for two,” says Sidell.

The first stop in Saltie Girl’s maritime excursion is the ample Tinned Fish, presented much like a sushi menu and including an order card and pencil to mark selections. Not your $2 canned anchovies from Wal-Mart, Saltie Girl’s tinned fish include everything from squid to scallops to eel to caviar with close to 80 different choices.

The second stop on the journey yields the restaurant’s Seafood Towers of Crudo, or Smoked Fish. King Salmon Crudo is accented by daikon, lime, jalapeno and avocado oil. Yellowtail Crudo is accompanied by cucumber, radish, stone fruit, serrano and Peruvian ponzu. Moving on to Small Plates renders up a Boston lettuce salad, where vegetables are served shaved and lightly bathed in champagne vinaigrette.