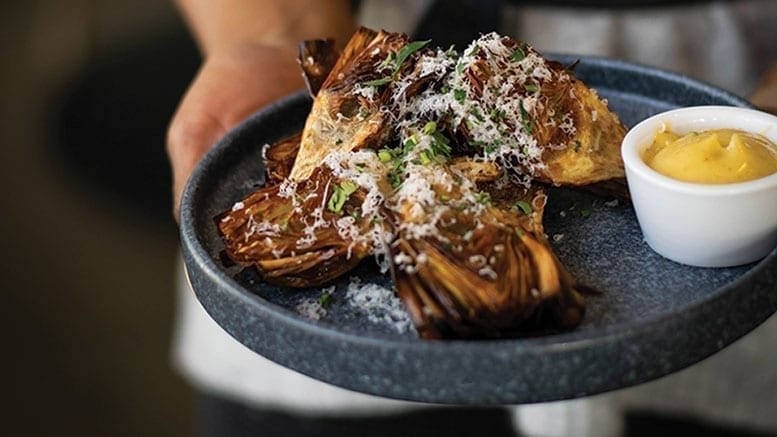 “The name reflects a composite of ideas,” says Adams. “Historically, Atlantic Wharf was a site of international trade. Currently the neighborhood is the financial district, and the menu reflects the collection of culinary ideas that I’ve gathered through my travels in the Mediterranean.”

The thriving venue brings in about $4.7 million a year. At lunch, the customers are a business crowd. “They want healthy food and want to be in and out in about an hour,” says Adams. “At night, we see all kinds of people who join us for social and business reasons.”

Given the restaurant’s small plate Mediterranean-based orientation, sourcing produce plays a major role. Adams reports weekly spending on produce is an estimated $3,000 plus. “This depends on how busy the week is and how many private dining events we have,” she says.

The restaurant ensures diversity and quality of produce ingredients by purchasing from a mix of suppliers. “We source from a variety of local farmers and visit farmers markets when the season permits,” says Adams. “In addition, we use large-scale produce vendors such as Baldor and Sid Wainer, as well as general wholesale vendors throughout the year. Using large-scale vendors allows for access to a large variety of products and competitive pricing as well as produce from local farms.”

Quality, safety and value make up key criteria for produce sourcing. “We look for safe and reputable purveyors with competitive pricing,” says Adams. “We change our menus seasonally, about six times a year, so we buy locally and seasonally as much as possible.

Produce, including vegetables and herbs, play a major role in the restaurant’s menu. “The menu is based on Mediterranean cuisines — French, Italian, Spanish, Greek — that truly celebrate vegetables,” says Adams. “Vegetables and herbs give TRADE’s menu its particular character.”

At least 50% of the menu is vegetarian, and dishes with protein still significantly incorporate produce. “We think produce should be celebrated and central to the meal,” says Adams. “In some dishes, vegetables are the center of the plate, in others they accompany a protein.”