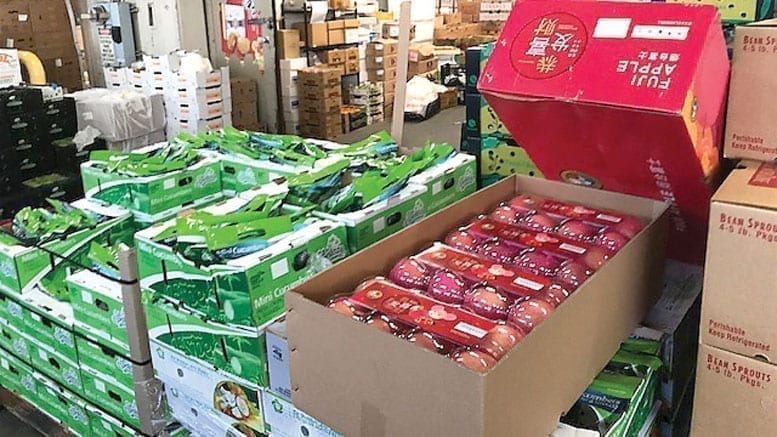 A range of demographics signals an educated food-consumer core and ample marketplace.

From its early history in the mid-1800s, San Francisco attracted a diverse population. The city experienced its largest population boom from 1848 to 1849 when it posted a 2,400% growth due to the California Gold Rush, according to World Population Review. Miners and speculators came from all over the Americas and the world.

San Francisco has grown steadily since and now boasts a population of close to 900,000, with the greater Bay Area (San Jose-San Francisco-Oakland) at a population of 8.7 million, according to Population USA. The U.S. Census Bureau reports ethnic composition in San Francisco is about 48% white, 33% Asian, 15% Hispanic and 6% Black, with many other ethnicities making up the remaining percentage.

Consumer diversity promotes opportunity in food and produce. “The varied demographic throughout the Bay Area allows a wide variety of produce to be sold including many specialty and high value items,” says Kevin Sommerfeld, owner of Banner Fruit Company, South San Francisco, CA.

Guy Davidoff, chief financial officer at Twin Peaks Distributing in South San Francisco, testifies San Francisco is a great place for produce, especially because of its diverse community. “Given our large population, San Francisco caters to many different ethnic groups living in the Bay Area,” he says. “This translates to many different eating habits allowing us to source the finest varieties of fruit and vegetables across the country and the world.”

San Francisco is also diverse as far as age and education are concerned, another supporting factor for the area’s booming food sector. According to U.S. Census data, 37.5% of San Francisco’s population is 25 to 44 years old with 25.9% in the 45 to 64 range. The city’s average age is 38.5 years. Of people more than the age of 25, 57% have a college degree.

Such a demographic leads to high demand for good food. San Francisco magazine in a July 2019 article noted, “San Franciscans have always loved indulging in local food — from the pricey Hangtown Fry created during the Gold Rush to the massive, yet bargain-priced Mission burritos. We are a city of disruption, and while that can mean the demise of beloved institutions such as Lucca Ravioli, it also brings opportunity. The Bay Area is the birthplace of game changers, such as plant-based meat alternatives and pizza robots.”

Indeed, many eating trends find their origins in San Francisco. “Northern California was the birthplace of California cuisines and the local, organic and sustainable menu trends,” says Chris Charlesworth, director of sales for Vesta Foodservice in Hayward, CA. “We are known for chef-driven menus that change with the seasons.”

Charlesworth further explains San Francisco is considered one of the top food cities in the country. “The availability of ingredients, proximity to growing areas and the abundance of what grows here throughout the year are a tremendous benefit,” he says. “It definitely influences restaurant trends, and menus are reflective of local farmers markets.”

The intersection of high population, proximity to growing regions and innovation leads to a dynamic food culture. “In Northern California any market is good,” says Gary Camarda, president at North Bay Produce. “We’re right in the middle of the green belt with a large percentage of good consumers.”

Evidence of San Francisco’s food diversity is found in the varied retail sector. According to Chain Store Guide’s Marketshare Reports, Safeway leads in share with more than 28%, followed by Costco at 15% percent and SaveMart at about 10%. Specialty chains, Trader Joe’s and Whole Foods each claim around 8% market share. A host of other independents and national chains, including Raley’s, Smart & Final, Walmart, Kroger, Target, Grocery Outlet, Mollie Stone’s, Sprouts, WinCo Foods, Lunardi’s and Mi Pueblo, all have between one and two percent share of the market.

The rest of the market consists of an army of unique independents serving specific demographics. “San Francisco prides itself on multiple independents who shop our Market on a daily basis,” says Corriea. “While chains may have the advantage of buying power, independents have an advantage because they move quicker on items. They’re more flexible and cater more to their specific clientele.”

The Bay Area is particularly known for high end, neighborhood-catering retail stores. Camarda points out Bryan’s Market [see story on page 18] as great example of a high-end store curating produce. “I’ve known the produce manager there for years, and it’s fun to have them as a customer,” he says. “He knows how to market and sell his product. For example, I sold him specialty Kishu mandarins. He sells them for $15/pound. He probably sold 100 pounds in a week. He knows his customers and knows how to present the product.”

Specialty retailers also take advantage of Market wholesalers’ ability to source niche products. “In the summer, I have an old-time farmer who grows heirloom peaches and nectarines,” says Camarda. “I send 10 to 15 cases to Bryan’s where they create a display of 1,500 pounds of peaches. He’s proud of this. Such a deal takes three components: the grower, someone who does what I do and a great retailer.”

The breadth of the city is represented in its restaurants. “San Francisco is probably as diverse as any city in the world, and our restaurants reflect it,” says Corriea. “You find just about any kind of cuisine in the Bay Area. And the sector continues to grow, even as labor and other costs increase.”

The variety of chefs, cuisine and food concepts is tightly married to the produce industry. “Chefs are aware of ingredients and develop menus based on seasonality,” says Charlesworth. “They find inspiration from other chefs, produce distributors like us and through social media.”

The San Francisco restaurant community is a huge promoter of fresh fruit and vegetables, says Davidoff. “New restaurants launch frequently and are keen to have the highest quality product available for their customers,” he says.