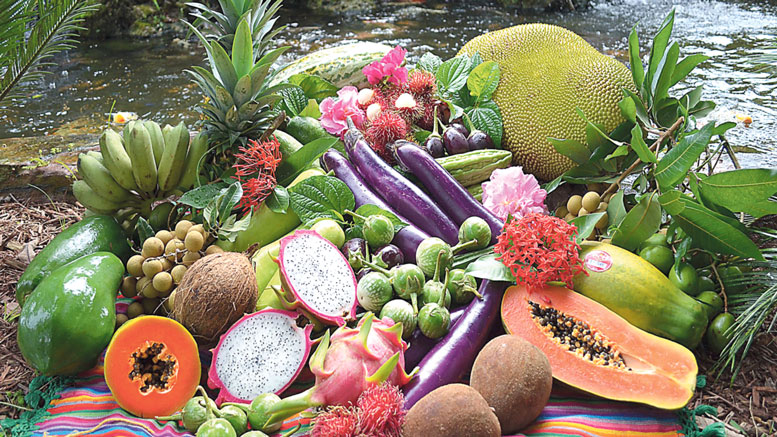 Originally printed in the January 2022 issue of Produce Business.

Selling a taste of the tropics when snow replaces sun in much of the nation makes good business sense, says Jason Kazmirski, retail specialist for Charlie’s Produce, in Seattle, WA, which supplies several independent retailers in the Pacific Northwest as well as larger chains such as Fred Meyer and Sprouts. “Mangos, papayas and other tropicals like dragon fruit are good fillers especially in January and February where there’s limited domestic fruit except citrus, and popular items like berries are expensive. It’s all about being able to give shoppers more choice.”

1. CATER TO TRADITIONAL AND ON-TREND DEMAND

There’s been an impressive increase in demand for tropical and exotic fruit in the U.S. over the past two decades, according to Marc Holbik, president of Ecoripe Tropicals, Inc., in Medley, FL. “The core of our demand has always come from the diversity of cultures found in the U.S., with many communities tracing their roots to tropical countries and looking for the fresh produce of their traditional cuisine.”

While it often takes time for mainstream distribution channels to find and attend to these markets, when they do, the rest of the population is treated to an ever-increasing variety of healthy produce. This dovetails with another factor driving demand for tropical fruits, the popularity of global foods.

For example, mangos are one of the most popular fruits in the world and a staple in the cuisines of many countries, according to Tricia Bramley, director of marketing for the Orlando, FL-headquartered National Mango Board (NMB).
“We know that when mango is consumed while dining out, it influences mango purchasing for home use. In a study conducted by Datassential, 64 percent of consumers were more likely to purchase fresh mango the next time they shop for groceries after trying a dish or beverage with mango while dining out,” says the NMB’s Bramley.

Beyond mangos, adds Robert Schueller, director of public relations for Melissa’s/World Variety Produce, in Vernon, CA, “There’s been a growing awareness and usage in foodservice recently especially on passion fruit, dragon fruit and jackfruit in salads, main dishes and desserts.”

Bananas and pineapple are long-time mainstream tropicals that represented over 10 percent or 7.9 and 2.2 percent respectively, of produce department fruit sales for the 52 weeks ending December 4, 2021, according to Nielsen Total U.S. data, as provided by New York, NY-headquartered Nielsen. After this, mangos totaled 1.2 percent of fruit dollars, up 0.2 percent for the same period. Papaya followed at only 0.3 percent of fruit category sales, however, were up 5.1 percent. Both coconuts and jackfruit only contributed 0.1 percent each of fruit dollars. However, coconut sales were up 15.0 percent, while jackfruit sales were down 24.5 percent.

“Mangos and papayas are everyday items for us, with passion fruit close behind,” says Max Maddaus, produce director at Kowalski’s Markets, an 11-store chain based in Saint Paul, MN. “We sell fresh-cut pre-conditioned mangos in a 16-ounce ripe ready to eat container and have done well with this item. Also popular are a 4-count pack of large-size Keitt mangos and organic Kents.”

Mangos, once only seasonal, are available in the U.S. 365 days, says Anthony Serafino, executive vice president and principal of the EXP Group, in North Bergen, NJ. “Retailers need to be in this game year-round, especially with the red mango (Tommy Atkins). We’re seeing this both for the whole fruit as well as fresh-cut fruit cups sold in the produce department.”

While annually obtainable, mangos are not necessarily always ripe for hot price promotions.

“From October through February and into March, most mangos sold in the U.S. come from Ecuador, Peru and Brazil. Logistics, finding vessels and containers to ship the fruit has been difficult. This winter, we had to bring the Peruvian fruit to the East Coast and truck it to the West Coast. That adds to the cost. Mexico has been starting earlier each year, like late February or early March. The logistics are easier to transport the fruit up from Mexico, and there’s a better chance for retail price promotions during the Mexican season,” says Jesse Garcia, vice president of sales and partner at Los Angeles Produce Distributors, in Los Angeles, CA.

Papayas are fairly mainstream as they have been available in North American retail stores for over 20 years, says Melissa Hartmann de Barros, director of communications for Fort Lauderdale, FL-headquartered HLB Specialties. “Papaya is highly nutritious since they have very high vitamin C content, which is especially desired in the winter months.”

Coconuts are a $22.6 million category growing at 11 percent in dollar sales versus the year prior according to IRI MULO 52-week data ending November 28, 2021, as shared by Frieda’s Specialty Produce, in Los Alamitos, CA. Young or drinking coconut SKUs are leading the charge and Frieda’s Tiki’s Drinking Coconuts are growing at about 25 percent over last year, according to Cindy Sherman, director of marketing.

Jackfruit was growing immensely before the pandemic, Sherman adds. “We believe that the shift in downgrading grab-n-go options at retail (cut-fruit and prepared food) was a big driver in the fruit’s decline in market value. In addition, consumers were looking to feed just themselves/their households instead of a crowd. Now that grocery stores and broader prepared food retail spaces are working back to the original merchandising options, on top of the continued use of and rise of jackfruit being used as a plant-based meat alternative, it’s safe to say that jackfruit will have a profound rise in market value within the coming years.”

To recognize what tropical fruits are gaining steam and will possibly move mainstream, look at the supply chain, recommends Melissa’s Schueller. “Year-round supply from multiple growing areas, including domestic production and imports, as well as the culture of the fruit and media buzz, are factors that determine its popularity, acceptance and potential widespread purchase.”

Yellow dragon fruit is on the rise among retailers served by Charlie’s Produce, says Kazmirski.

Dragon fruit is a $47.5 million category that has seen 65 percent dollar growth over the past year, based on IRI data ending November 28, 2021. Specifically, yellow dragon fruit, known as Honey Dragons at Frieda’s Specialty Produce, is enjoying a growth rate of over 100 percent, says Sherman.

“Tropicals are gateways to other tropicals. Consumers try pineapple and then move on to mango,” Sherman adds. “From there they try yellow dragon fruits and want to know what’s next. Since experimentation breeds more experimentation, we anticipate that demand for lesser-known tropical-like Cherimoya and Mangosteen.”

HLB Specialties has seen a considerable increase in sales of dragon fruit and mangosteen as well as rambutan and lychees especially during the pandemic, says Hartmann de Barros. “It’s a mix of wanting to experience something different to combat boredom as well as needing to boost the immune system with healthy choices. Rambutan has gained a steady following since we introduced them in a 12-ounce clamshell presentation in 2016.”

“Both native of the Americas, Passionfruit has always had strong demand from the Latino market and has become more mainstream as it is used in more commercial drinks, which will translate to more demand in fresh fruit. Sapodilla is an up-and-comer, as it ripens to an unbelievably decadent brown sugary taste and has strong demand from Asian-American and Latino consumers,” says Ecoripe Tropicals’ Holbik.

Tropical fruits were once displayed by the handful on a dark dusty shelf in the back of the produce department. No longer, says Charlie’s Produce’s Kazmirski. “There’s a real ‘wow’ factor to having them in the front of the department. Plus, you get more bang for your buck by grouping tropicals together rather than separating them throughout the department. Also, we’ve found additional signage on displays helpful, especially now that most stores aren’t sampling.”

Another benefit of a dedicated and diverse set is impulse sales on lesser familiar tropical fruits.

“Customers come for the mangos and papayas and other things catch their eye to buy like the dragon fruit and rambutan,” says Jessie Capote, chief executive officer at J&C Tropicals, in Doral, FL.

New this season, the company is offering ¼-size self-standing display bins. These are available either generic or imprinted with a specific tropical.

“Fresh cut displays are also a way to feature mangos in a different way to the consumers. Retailers can utilize refrigerated end caps to feature fresh cut and some stores even have mobile refrigerated displays that can be moved around within the stores or even at the checkout,” says the NMB’s Bramley.

Consumers are eager to learn about tropical items, says HLB Specialties’ Hartmann de Barros. “We launched a new website in November that includes consumer videos and information. Packaging is also a good platform to educate. QR codes on packaging that consumers can scan can lead them to a website explaining how to eat and what to look for in a fruit.”

Recipes are important too, says Alex Jackson, director of sales for Frieda’s Specialty Produce. “Our goal is to inspire new food experiences and the best way to do that is to show consumers how easy it is to use the particular fruit in their everyday life. Whether it’s small tips/tricks like adding a pinch of salt to Kiwano or displaying a more elaborate recipe like a Passion Fruit Mojito, providing hints on how to utilize the product will make it easier for the consumer to want to try, and therefore buy the product in the store. ”

Ecoripe Tropicals’ Holbik also believes in education across the supply chain. “We are all very familiar with the storage, handling, and display of commodities like apples and pineapples, but exotics can be challenging at first. It’s important to know what they are supposed to look like, such as not leaving a rambutan that has turned black on display. Many tropical fruits are damaged by temperatures colder than 50 Fahrenheit or have shorter lifespans requiring greater rotation. Rewards of this education are increased revenue and happy customers.”

Pricing tropicals to encourage trial is always a great strategy, says Frieda’s Specialty Produce’s Jackson, “especially when the item is a low volume mover. Beyond price, merchandising exotics with a tropical commodity, especially when it’s on ad is a great way to get a shopper to add that item to their basket. When mangos or pomegranates are on sale, merchandise dragon fruit to encourage trial.”

To be successful and grow tropical fruit sales in the future, Melissa’s Schueller suggests retailers “keep up with the changing customer base in your store area. Demographics are changing fast, and it’s important to have a store strategy and game plan on how to offer a one-stop-shop experience for customers.” 