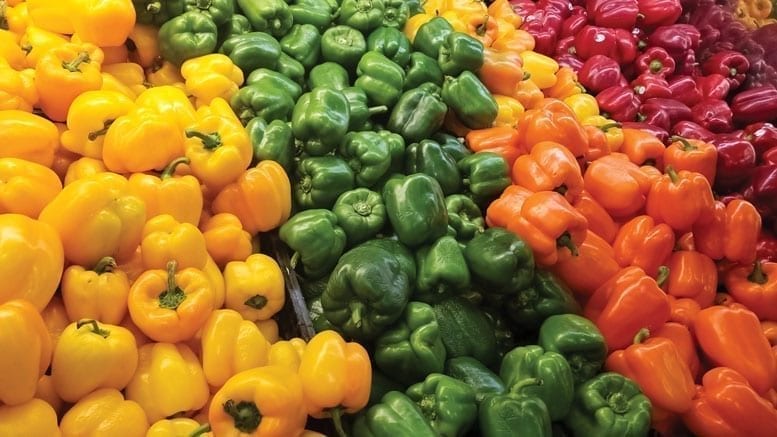 Versatility, flavor, packaging and ease of use are drivers for consumers, applications.

Sweet or bell peppers, which are fruits botanically and classified as berries, are enjoyed most often as a versatile vegetable. Just look at the appetizing array of recipes from the Food Network alone.

There’s everything from stuffed bells to bell pepper slaw, from bells in breakfast potatoes to dinnertime chili and from Latin-style Bell Pepper Nachos to Asian-inspired Shrimp & Bell Pepper Stir-fry.

Despite this delicious adaptability, short-term sales of bell peppers at the supermarket appear flat. For example, category dollar contribution to total produce sales was 2.8 percent during the 52 weeks ending October 26, 2019, according to Nielsen Total U.S. Food data, and the same percentage in the year prior. Yet, taking the longer view of a decade, fresh consumption has increased nearly 20 percent from 8.7 pounds per person in 2008 to 10.3 pounds in 2018. Some of this category growth is attributable to a proliferation of sizes, shapes and packaging types. Going forward, it’s all about capitalizing on trends.

“Sweet peppers are benefiting from a combination of a variety of trends now; from the pepper’s versatility, to consumers looking for unique and premium flavors, to the portability and snackability of some sweet peppers,” says Randy Bailey, president of Bailey Farms, in Oxford, NC.
Here are seven ways to sweeten bell pepper sales:

Bell peppers are grown throughout the United States in open fields most commonly. Yet, the nation’s total harvested acreage of peppers has decreased by 36%, from just more than 62,000 acres in 2000 to just under 40,000 in 2018, according to the Washington, DC-headquartered U.S. Department of Agriculture’s (USDA) Vegetable Summary 2018, released in March 2019.

At the same time, the percent of imported bell peppers sold in the United States has increased nearly 38% in the last decade, based on statistics current to February 1, 2019 by the USDA’s Economic Research Service (ERS). Most bell pepper imports to the United States come from Mexico.

“If Mexico is short, which would be anywhere from a 60- to 80-day window in December, January and February, we fly in greenhouse-grown bell peppers from Spain,” says Carl Mastronardi, president and chief executive for DelFrescoPure, in Kingsville, ON. “In the future, we’re looking at the cost effectiveness of continuing importing product from Spain versus adding lights to our greenhouses during the winter in Canada versus the cost of truck shipments of peppers from Mexico.”

Overall, supply of bell peppers in the U.S. marketplace is fairly constant when accounting for all the growing regions, indoor production and in-the-field production, says Enrique ‘Kiki’ Arana, sales manager for Wilson Produce, in Nogales, AZ. “Globalization allows sweet peppers to be on the market shelf pretty much year-round.”

Green, yellow, orange and red bell peppers are most popular at New Seasons Markets, a 21-store chain headquartered in Portland, OR, according to produce director, Jeff Fairchild. “White, chocolate and purple colored bells are more for aesthetics than eating quality, so they don’t get as much play.”

Green bell peppers remain the traditional category anchor. However, growers agree other colors are gaining in sales and shelf space.

“Consumers who couldn’t digest the immature green peppers are now finding they can enjoy the fully ripe peppers, which are sweeter,” says Mastronardi. “Thus, the big drivers in color are now red, yellow and orange. Production wise, we are seeing an uptick in orange bells to about 30 percent of the crop, with yellow 30 percent and red about 40 percent.”

“The aesthetic quality of bell peppers and the colorful flair they bring to dishes is especially popular with the Instagram generation of Millennials,” notes Joanna Jaramillo, marketing specialist for Wholesum Harvest, in Nogales, AZ.

It’s important to display an assortment of peppers to create eye-catching displays.

“Retailers are great at providing a choice to their consumers, not only in the color assortment but in bulk, pack, as well as organic options too. Merchandising greenhouse-grown colored peppers on end caps has proven to be a successful move giving it a more prominent presence at retail,” notes Chris Veillon, chief marketing officer for Pure Flavor Farms, Leamington, ON.

New Seasons’ Fairchild explains that there was a learning curve with customers for the mini sweets. “At first, they thought the peppers were hot and avoided them. It’s taken a year or two, but now we’re seeing sales on a regular basis. This is especially true in the spring and early summer, before our local peppers come in.”

Some growers, such as Divine Flavor, based in Nogales, AZ, are taking the appeal for mini peppers one step beyond by cultivating select seed varieties such as their Tribelli-brand that delivers on high flavor, consistent color and exceptional quality via greenhouse production in a number of growing areas in Mexico that provide year-round supply.

“We offer the Tribelli mini peppers in half-pound and 1-and 2-pound packs to appeal to everything from snacking to cooking usages,” says Michael DuPuis, quality assurance and public relations coordinator for Divine Flavor.

Retailers can sell more by offering peppers loose by the each or pound and packaged, although the trend, growers say, is for the latter.

“Some consumers may prefer to purchase one or two peppers for a recipe and do not need to purchase more,” says Veillon. “As a result, we can pack in bulk to custom pack formats to meet our retail and foodservice partner’s needs.”

“Bulk product tends to be less since this package is generally earmarked for repack operations that are converted into retail-ready packs. We have had trials in selling bulk mini sweets at the store level, but it seems to always trend back to wanting the packaged product,” says Wilson Produce’s Arana, who adds the company has seen an increased demand for 1- and 2-pound bagged organic mini sweet peppers.

In fact, as is currently the case with the company’s mini sweet peppers, Arana says he sees the packaged pepper out-selling the bulk products. “Convenience and food safety issues are the primary reason driving this. In store, customers may pick peppers up to examine them, yet not necessarily buy, thus exposing the product to potential contamination. This is why we think retail-ready units are better. Also, these units offer consumers an ability to store and use only the peppers as needed at home. This is an important factor.”

Beyond this, packaging can help consumers looking for meal inspiration, says Bailey Farms’ Bailey. “A part of meeting this need comes from messaging on the packaging. Also, since peppers tend to get picked through in the bulk section, shrink and scan accuracy can be a challenge for retailers. Packaged product helps solve this,” notes Bailey.

Depending on the retailer and region, the type of packaging itself can vary.
“Club stores’ customers prefer larger pack formats that are sold by units of 6, while conventional retail shoppers look for formats of 2-, 4-, 6- each or even a weighted pack. For consumers who are more value-driven, we can see them gravitating to combo packs that feature an array of colors, or even sizes for that matter,” says Pure Flavor’s Veillon.

One of the most talked about topics regarding packaging is plastic use and sustainability, according to Wilson Produce’s Arana. “Alternative biodegradable cartons and plastics to replace regular plastic bags and materials are currently at the forefront of our research and development projects. The demand for this change could spearhead increased demand for sweet peppers and many other products, as consumers think better about the purchase and its effect on the environment.”

The combination of field and greenhouse production, and domestic and import availability, has created a steady, promotable supply of bell peppers year-round.

“We usually have some type of pepper in our ads every week or every other week,” says Goldman of Morton Williams Supermarkets.

There are times when certain types of peppers are more attractive for price discounts than others.

“For our mini sweet program, the optimum time for major promotions is during the early spring and late summer. These are the time frames when we are at the peak of production. Holiday promotions are always great for moving volume but are not always in tune with production. Prices are much more erratic during these promotions,” says Wilson Produce’s Arana.

Veillon says that, like tomatoes, not all sweet bell peppers are created equal and come in all shapes and sizes — to an extent. “If different in sizes, the weight will vary versus selling by the unit. Selling by the unit can increase the amount sold if the price is right/hot buy etc., while selling by the pound can be more advantageous for the retailers to increase their margins,” he adds.

“Peppers are beautifully versatile and appeal to Millennial shoppers who are interested in plant-based dishes. Peppers also pair well with meats, poultry and seafood and are ideal to cross-merchandise in these fresh departments of the store,” says DelFrescoPure’s Mastronardi.

Within the produce department, “there are opportunities to cross-merchandise organic bell peppers with organic salads,” suggests Wholesum Harvest’s Jaramillo.

Additionally, “We have seen a shift in consumer eating habits with more fusion dishes across meal types, this has helped sweet peppers as consumer palates expand,” says Bailey Farms’ Bailey. “Retailers can capitalize on this by thinking about different meal occasions, whether it’s a baby bell pepper as the vessel for a center of the dish or whether it’s a mini sweet pepper for snacking. They can also assure from an assortment and merchandising standpoint that all the boxes are checked.”