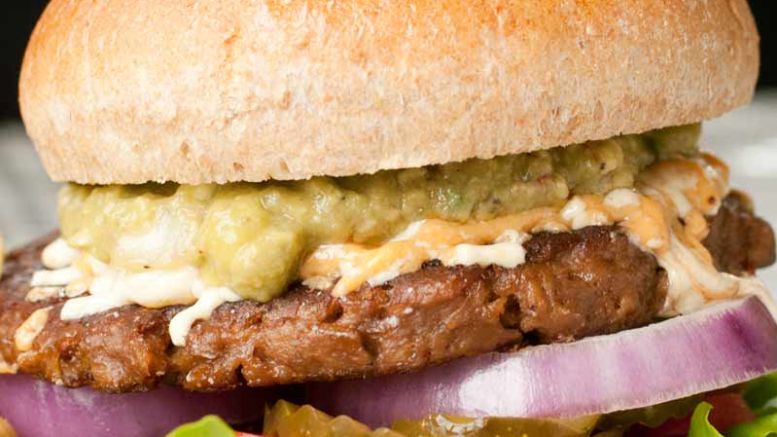 A traditional burger in appearance, texture, and taste — piled high with lettuce, tomato, red onion, pickles, mayo, ketchup, and mustard — the Spiral Burger's patty is made of soy protein.

The vegan diner bucking produce trends in every way.

Both the retail and restaurant industries in the state are on a growth trajectory. In 2015, the National Restaurant Association reported Texas’s restaurants, which accounted for 1,182,900 jobs (or 10 percent of the state’s employment), were projected to register $44.5 billion in sales.

According to the Texas Restaurant Association, in 2013, there were 41,678 eating and drinking places in Texas and the segment’s job growth is anticipated to be 22 percent in the next 10 years.

Spiral Diner and Bakery is a Texas success story. The restaurant’s first location opened in 2002 by Amy McNutt in Fort Worth. Manager Sara Tomerlin saw an opportunity and opened the diner’s second location, which is separately owned and operated, in 2008.

“We’re separate companies as far as finances, but the menu and philosophy are the same, “ says Tomerlin. This 80-seat vegan diner has a traditional style, décor and menu. “The idea is that we’re serving comfort foods that people grew up eating, but in a vegan version,” says Tomerlin.

This includes burgers, sandwiches, pastas, shakes, baked goods and ice cream. All items are made in-house from scratch. There also is a menu of rotating blue plate specials that include items like meat loaf curry. Being vegan, no ingredients at this eatery come from animals. No meat, dairy, eggs or honey are used. All ingredients are plant-based and cholesterol-free.

“But we don’t position our menu items as health food,” says Tomerlin. “Instead, we really focus on taste and familiarity — since we still use sugar and oil and other ingredients that are not necessarily health oriented.”

Produce is a big part of Spiral Diner’s menu. The restaurant gets fresh produce daily. Among its popular items are salads and grilled veggie bowls. Dressings and sauces are made in-house using fresh herbs and tomatoes.

“In terms of produce trends, we’ve seen ingredients with produce become more popular in the past 15 years,” says Tomerlin. “For example, kale is really trendy now.”

Organic produce is used as often as possible, and local products are sourced frequently.

“The produce we order pretty much stays the same with the exception of the blue plate special, and we try to order local where we can and look for minimal fruit and vegetable processing,” says Tomerlin. “It depends on the seasons, but we don’t position ourselves as a farm-to-table concept.”

Specifically with tomatoes, Texas farms don’t use wax coatings, which Spiral Diner avoids due to being a vegan restaurant. Tomerlin says there is definitely a push toward independent restaurants in Dallas, as opposed to big chains.

“People are going to the chains less often than before,” says Tomerlin. “We’re in a trendy neighborhood that includes all small, independent chef-driven restaurants that offer high-quality food.”

When Spiral Diner’s second location opened, it was the first eatery of its kind in the neighborhood. In the past seven years, more independents have arrived.

Its customer base has expanded, as well, from mainly vegans and vegetarians to mainstream diners. “Our food tastes like traditional diner fare so, over time, our clientele has broadened quite a bit,” says Tomerlin. “Now, way less than half of our customers are vegan or vegetarian.”

Instead, there are an increasing number of Millennials who are environmentally conscious supporting the concept.

The Rise In Produce-Topped Pizza On The Menu