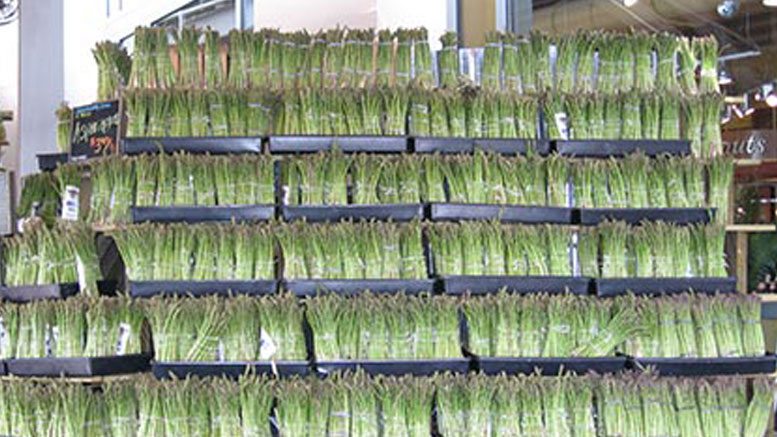 Making the Most Out Of Asparagus

Asparagus is a vegetable with a lot of potential.

Known for its health benefits and versatility, targeting a knowledgeable consumer base on asparagus can help with sales, but there also are some challenges.

Asparagus is available year-round, a change in recent years from the days when it was a seasonal item. That’s a benefit when selling to people who want to make asparagus a regular part of their diet, but seasonal items have the advantage of creating buzz when they’re available. It’s difficult to promote something as being special when it can be purchased at any time of year.

Asparagus, At Any Time

Asparagus became a 365-day vegetable thanks to the growing market in Peru in the early 2000s.

“For more than a decade or so, Peruvian asparagus importers have been able to supply retailers and foodservice with asparagus 365, maintaining asparagus on retailers’ shelves and making it a staple and perfect meal solution for U.S. consumers year-round,” says Priscilla Lleras, of the Peruvian Asparagus Importers Association, based in Miami.

Peter A. Warren, import director for Ayco Farms, based in Pompano Beach, FL, says Mexico and Peru are driving the development of the asparagus business.

“With outstanding yields and quality, with less expensive labor and with less water issues, it made sense for these countries to grow this segment,” says Warren. “And they have done an amazing job growing it.”

Charlie Eagle, vice president of development for Southern Specialties, based in Boca Raton, FL, says his company began making investments in Peru in 2001.

“The growing regions there support year-round supplies,” he says. “Peru has become the number one exporter of fresh asparagus in the world, and Southern Specialties programs have been a part of that growth.”

Eagle adds Mexico has become a major player in the asparagus market. “Today, Mexico does an excellent job of supplying asparagus for a significant portion of the year and Southern Specialties is invested in asparagus programs in that country as well,” he says. “Over the years, chefs were able to feature asparagus in their establishments year-round. Retailers learned there was good demand for the product, and that asparagus customers were a great demographic group that brought good ring to the register.”

Leo Rolandelli, owner of Jacobs, Malcom & Burtt, based in San Ramon, CA, also notes that Mexico is becoming a key grower of asparagus, but that there are challenges with both Mexico and Peru.

“Peru has been the main producer of asparagus over the years, and that’s starting to change a little bit where there’s more product coming out of Mexico to compete with Peru,” says Rolandelli. “But still, weather-wise, condition-wise, and with hurricanes coming through, it’s very temperamental out of Mexico, where you can’t get a definite feeling of a volume. Over the last two or three years, this has happened. Peru’s air freights have gone so high, the availability of planes are not there anymore so people who want to promote asparagus find it very difficult.”

The Latest In Asparagus

Lleras says asparagus is growing in popularity because of its nutritional value, convenience and ease of preparation.

“Peruvian asparagus is a healthy and nutritious vegetable, providing U.S. consumers with many meal preparations that are saving time in the kitchen and delivering value-added meal solutions,” she says.

Warren notes more and more people are eating asparagus for a variety of reasons.

“Consumption is increasing,” he says. “Americans are trying to eat healthier. Asparagus is super versatile. You can bake it, fry it, nuke it, boil it, sauté it, grill it and eat it raw. It is extremely healthy.”

But he adds some shoppers still are hesitant to purchase asparagus.

“People who are not familiar with it are scared of it,” he says. “They don’t understand how to prepare it.”

One key to increasing sales, says Warren, is by educating consumers on how to feature asparagus in meals, and to show them how easy it is to prepare.

“Cross-merchandising with steak is one of the best ways to push asparagus,” he says. “A picture of the asparagus on the grill next to a steak works wonders for the power of suggestion.”

In Lleras’ opinion, cross merchandising is a great way to increase asparagus sales.

“Fresh asparagus has numerous cross merchandising opportunities,” she says, adding it can be promoted with salads, oils and dressings; in deli and meat departments; and in the seafood department.

Jacobs, Malcom & Burtt’s Rolandelli says he is a “real believer” in cross merchandising, and that the best item to cross merchandise asparagus with is mayonnaise. He’d like to see a promotion with a company such as Best Foods, where if customers buy asparagus and a jar of mayonnaise, they get a coupon or rebate.

“I think that definitely helps to sell asparagus,” he says. “They’ve done that in the past here in California and I think it was quite successful, especially during the promotional times, like Easter, which is the biggest holiday for asparagus.”

Rolandelli notes while produce managers do a great job of promoting asparagus in their stores, he does see room for improvement.

“In California where we live, I go into some of the major chains, and they always push it toward the back of the refrigerated counters, and when the shopper is going down the counter through the lettuce and similar products, by the time she gets to the asparagus display, she might already have planned her meal,” he says. “I think asparagus should be put up closer to the front, because it’s not a cheap item, at $2.99 or $3.99 a pound.”

“We encourage produce managers to display white and purple asparagus next to the green asparagus,” he says. “The colors look great together and bring shoppers to the product. Our Southern Selects asparagus tips in wrappers are a unique take on the product. These 8-ounce bundles of small asparagus are trimmed to about 6inches. They cook in minutes and taste great.

“Value added asparagus in our bright Southern Selects packaging are a knockout on the shelf. Microwave and steam bags make it supremely easy for folks looking for something convenient, tasty and nutritious for dinner.”

Another important element to an increase in asparagus sales is signage.

“Effective signage should stress suggestive usage ideas, as well as the many nutritional benefits of fresh asparagus,” says Lleras. She says signage should promote usages for asparagus, such as it being a tasty party item, easy to barbecue, microwavable and its benefits as a quick and healthy snack.

Ayco Farms’ Warren says weekly ads also can help sell more. Pricing is another issue. He says selling asparagus at $2.99 sells eight times as much as when it costs $3.99. Larger displays, taste testing and suggestions on how to prepare asparagus “all work wonders in getting the consumer to react,” he says.

Recipe cards are another useful tool, and Lleras says consumers are always on the lookout for new dishes to try.

Eagle notes Southern Specialties provides recipe cards to customers. “Many of our presentations have QR codes that link to recipes on our website,” he says. “It has never been easier for consumers to learn about preparation and recipes.”

One of the best things asparagus has going for it in terms of marketing it is that it’s so healthy. According to the website for the California Asparagus Commission, a serving of asparagus consisting of five spears is high in vitamins C and K, and folic acid. It’s low-calorie and low-sodium. The website also notes the National Cancer Institute reports asparagus is high in glutathione, one of the body’s most potent cancer fighters. Additionally, asparagus is high in rutin, which is valuable in strengthening the blood vessels.

“This is a huge, huge thing,” says Warren of tying asparagus to the healthy lifestyle. “There is nothing with more folic acid and other important health benefits.”

“Health-related promotion is a definite method of gaining sales,” she says, adding that the vegetable’s health benefits include it being low in calories, being naturally fat-free and cholesterol-free. It’s also a good source of potassium, vitamin A and vitamin C.

And this healthy food can lead to healthy sales.