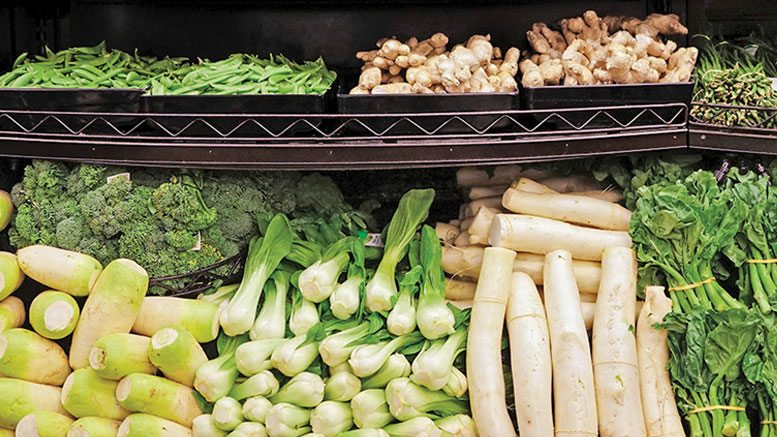 The Chinese New Year brings opportunity for the produce industry. 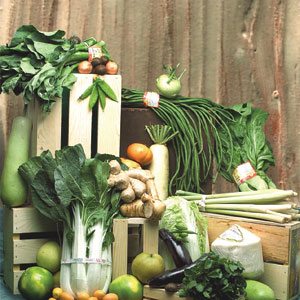 When the Chinese New Year is celebrated on Jan. 28, 2017, a great deal of culture and tradition will help mark the special day. This year commemorates the Year of the Rooster.

A big part of the 16 day-long celebration involves food, which is why the produce industry should plan ahead. Each dish is steeped in tradition and symbolizes a particular wish for the upcoming year. Robert Schueller, director of public relations for Melissa’s Produce in Vernon, CA, says food is one of the most important aspects of the Chinese New Year — also known as the “Spring Festival” or the “Lunar New Year” — and large amounts are prepared and eaten in both Chinese and other Asian households in the United States. “Many of the foods served during the New Year have symbolic meanings,” says Schueller. “Some foods have a name, which sounds the same as a character with a lucky meaning; for some foods, their shape and color are emblems of words special to the Spring Festival, like happiness, prosperity, fortune or luck.”

Eric Fung, owner of Minneapolis-based Asian grocery store United Noodles, says the Lunar New Year is celebrated by numerous Asian cultures and countries, and the stores know how important it is to the Asian community. “They tend to love vegetables with not a lot of meat; they skip on sweets, instead enjoying fruit for dessert. So, obviously, produce is a major part of the Lunar New Year dining festivities. Cabbage is a big item, as well as bitter melons for stew. Winter melons are also great for soup. People love to make dumplings, and add in mushrooms, scallions, a variety of melons, squash, zucchini and cilantro.”

At United Noodles, the customer base includes first-, second- and third-generation Asian families from various nations, as well as Asian students attending the nearby University of Minnesota. There are also a number of non-Asian Millennials exploring new culinary applications.

“For us, it’s all about quantity. Bountifulness is what sells because of the volume customers are buying during Lunar New Year,” says Fung. “They want to make sure they have a lot to choose from, and we want to make sure we have all the varieties for them.”

“Many Chinese greens, like gailan and Shanghai bok choy, will continue to do well,” says Oakley Boren, trade show and communications manager for Frieda’s Specialty Produce in Los Angeles. “Certain items are going to be more popular for their symbolism — Daikon radishes for good fortune and Napa cabbage for wealth, for example. Over in fruits, kumquats and Mandarins represent wealth, while pummelo and pomegranate represent abundance and prosperity.”

Kelsey Anderson, general manager of United Noodles, says there is a big trend in non-Asians cooking Asian produce and eating Asian fruits. “I think it’s the familiarity with what was once unfamiliar. It’s the globalization of food,” she says. “In the last five years, there’s been greater interest in people branching out. It can be a hipster badge of honor to say, ‘I love cooking pea shoots.’ People want to be at the top of their game and one-up each other.”

Space allocation requirements need to be considered when marketing produce to Asian-Americans. The idea is to create attractive, vibrant displays. “The image of freshness, quality, consistency and variety must be perceived by the customer,” says Schueller. “You need a clean, fresh, organized display, which means wetting it down and straightening it daily. Never stack Asian produce high, as some items are sensitive. Organize the produce so that you allow for a breathable area.”

One challenge for retailers, Boren says, is that the date of the Chinese New Year changes year to year. “Best practices include having the display up two weeks before the day and continuing for the week afterward,” he says. “Create a beautiful destination for the Chinese New Year with top sellers together with festive signage; decorate with lots of red and gold décor — work with the floral department.”

Fung suggests stores consider sharing recipes in-store and with local food bloggers and the local newspaper’s food section. He also suggests reaching out to the local media and pitching a segment to the local TV station’s morning show.

“Unlike other holidays, you likely won’t be competing for attention. You can really differentiate and educate at the same time,” says Fung. “As non-Asian consumers become more exposed to flavors and dishes beyond the white take-out box, they soon discover the complex nature of various Asian cuisines. Often, people don’t realize that the Asian markets they pass every day are full-fledged stores bursting with unique and hard to find products, including fresh produce that you typically wouldn’t find in a more traditional American grocery store.”

David Mitroff, chief executive and founder of Oakland, CA-based Piedmont Avenue Consulting Inc., works with Chinese restaurants that rely on local grocery store retailers to supply their ingredients. “It’s strategic to market Asian ingredients specifically for the Chinese New Year, like how grocery stores do around American holidays,” he says. “For example, the produce department can set up a section with relevant merchandise and decorations leading up to the Chinese New Year.”

In Chinese tradition, beliefs in lucky and unlucky numbers are deeply rooted and are believed to be auspicious or inauspicious based on the Chinese word that the number’s name sounds similar to. The number eight, for example, is one number that is favored because it phonetically sounds similar to the word “prosperity.”

“A merchandising measure that caught my eye was a promotion from a local Chinatown produce store promoting the purchase of eight items for a discount around the Chinese New Year, which is attractive because everyone wants to have prosperity and luck when going into the new year,” says Mitroff.

While the Asian produce category is a staple among the Asian community, there has been an increased interest from non-Asian consumers who are broadening their palates and becoming more open to trying new things.

“Increased population and immigration of the Asian culture and foods have been seeing an increase in the Asian category by about 5 to 10 percent in markets across the country in the past couple of years,” says Schueller.  That’s why it’s important to clearly identify all items in the store.

Another way to entice non-Asian consumers to try Asian exotic varieties is to package select products together. “Here are the five veggies you need to make an amazing stir fry or stew. You can take this pack home, throw it in water or sauté it in a pan, and you’re on your way to a delicious tasting experience,” says United Noodles’ Fung. “Recipe cards are also very helpful.”

Preparing recipes at point-of-sale is another opportunity to entice shoppers. Schueller says one approach for retailers is to provide samples and start customers off with an item that is familiar. “Once consumers realize they are comfortable trying different foods, they will be more open-minded to try other varieties. For example, a retailer could give samples of unfamiliar Hoisin sauce paired with ordinary chicken pot stickers. Non-Asian consumers are used to dipping their pot stickers in soy sauce, so it is likely they are willing to try this new pairing,” he says.

When preparing for the Chinese New Year it is important to plan in advance which produce items will be most requested. “Do your research on common must-have foods and what type of ingredients will be required,” says Piedmont’s Mitroff. “For example, the Chinese New Year is celebrated through symbolism. Tangerines in Chinese sound similar to the word ‘luck’ and are placed around homes and restaurants to bring good luck for the new year, so obviously order a lot of those. The meals served the first day after the New Year are traditionally vegetarian; know that a lot of people are going to buy cabbage, radish, carrots, etc.”

Food is the cornerstone of the Chinese New Year, with specific dishes and food items consumed to usher in a prosperous coming year. Like vegetables, certain fruits are eaten during the holiday because they are round and golden in color, symbolizing fullness and wealth. Here are some fruits consumed during the new year celebration.

The pomelo is thought to bring continuous prosperity and status. The more one eats, the more wealth it will bring. The Chinese word for pomelo sounds like “to have.” This fruit is also symbolic of family unity.