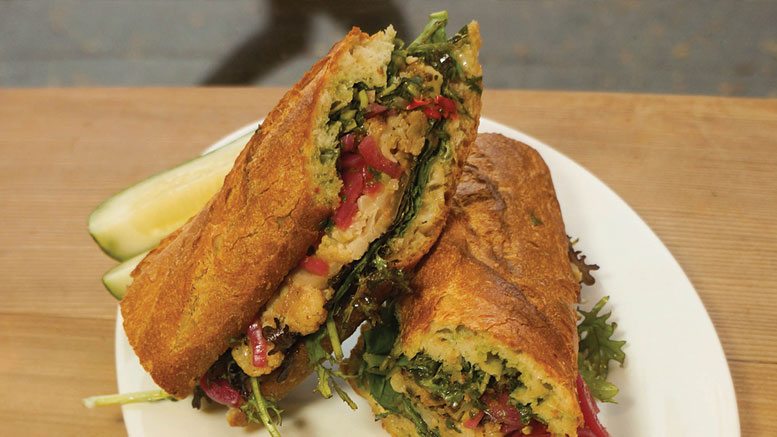 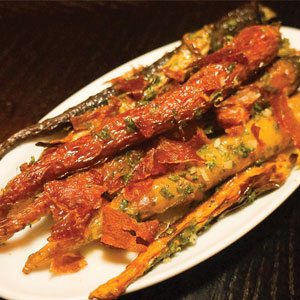 To predict retail produce trends of tomorrow, look no further than restaurant trends in the past few years. Indeed, The Datassential MenuTrends Database shows the rapid growth of today’s supermarket superstar, kale, dates back to at least 2010 in restaurants. Like other trending vegetables and fruits, kale emerged first in fine dining, then was gradually adopted by fast-casual and other types of restaurants, proliferated in venues such as convenience stores, and then became ubiquitous as it entered retail. That’s what makes the trendspotting research by Chef Gerry Ludwig, corporate consulting chef in culinary R&D, Gordon Food Service, Wyoming, MI, and his team so valuable to retail produce departments for figuring out what might be the next “hot” vegetable.

The most recent report marks the 15th year of trends research by Gordon Food Service. Ludwig’s team monitors new restaurant openings in three cities: New York, Los Angeles and Chicago. For its most recent report, Ludwig and his team tracked 400-plus restaurant openings, visited 107 restaurants in the three cities and tasted 1,158 different dishes in a three-week period. “Our methodology gives us an accurate and street-level measure of the evolution of macro trends in foodservice that will influence menus,” says Ludwig.

Ludwig, a meat lover, first spotted vegetable centricity eight years ago at the restaurant Gjelina in Venice,CA. By 2014, he and his team noticed chefs were picking up on the trend in their new restaurants. “Rather than treating vegetables as side dishes, chefs started creating a dedicated category of well-thought-out, complex and skillfully prepared vegetable dishes that were featured prominently at the top, or in the center, of the menu rather than in a small box on the bottom. This was groundbreaking, and we see this trend continuing to pick up steam.” He names vegetable centricity as one of two major macro trends, along with global cuisine.

Ludwig draws attention to what he calls the produce monger’s dilemma — finding ways to increase sales and consumption of fresh produce. “Part of the challenge is to change the retail produce mindset from side dish to center of the plate. Today’s innovative chefs treat produce with the same regard as animal protein, not as an afterthought.”

Ludwig is quick to point out that today’s vegetable-centric restaurant plate is not vegetarian, vegan or meatless. Rather, it harnesses the savory umami 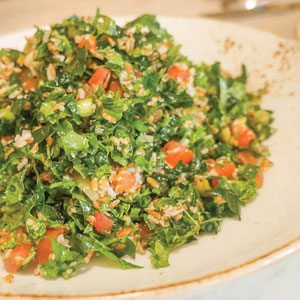 flavor of animal protein to enhance the flavor of the vegetables, but with vegetables squarely in the middle of the plate. The Culinary Institute of America calls this the “protein flip” because it reverses the placement and roles of meat and vegetables. Ludwig says that in restaurants, diners will order more vegetable-based dishes if flavors are appealing and compelling. Many dishes tasted by Ludwig boosted the flavor of vegetables with small amounts of cured pork products.

This trend offers supermarket retailers and produce departments the opportunity to promote vegetable-animal protein pairings. Recipes, whether from the market, a local chef, a commodity board or a trade association, provide customers with ideas on how to prepare vegetables in new and flavorful ways. Cooking demonstrations — space and resources permitting — draw customers by their presence and tempting aromas. Produce department tasting opportunities and recipes from the in-store deli or restaurant could call attention to both the vegetables and fruits used in the dishes and the store food-
service offerings — a win-win for both departments.

While bagna cauda is not widely available commercially, it is simple enough to be made in stores with food preparation capabilities, packaged and sold in the produce department alongside complementary vegetables such as cauliflower or potatoes and promoted with recipes. Other umami-rich condiments that could be displayed in the produce department along with recipes include Asian sauces, Japanese bonito flakes, smoky barbecue sauce, Caesar dressing, blue cheese dressing and Parmesan cheese.

“Kale is not a flash in the pan — it is here to stay,” says Ludwig. “The pundits who say that kale is going away are wrong. Once a chef puts kale on the menu, it remains on the menu. Kale has reached a point where it is not the newcomer; people expect to see it on the menu.”

Value-added kale products such as baby kale and chopped sauté greens continue to gain popularity at retail. However, there are new ways to enjoy kale, as evidenced by these restaurant chefs:

Kale haters looked forward to the day when another vegetable topples kale off its lofty perch. Some said it was cauliflower. Home cooks continue to be excited about cauliflower — as crumbles to substitute for rice or potatoes and as steaks to take the place of meat — and the vegetable was among the fastest-growing in fast casual restaurants in 2015. “We saw cauliflower in vegetable sandwiches and hummus. Several chefs are preparing it using meat techniques such as rotisserie grilled and spit-roasted. Mashed and smashed also are popular,” says Ludwig. He cautions against the meatless mindset in using cauliflower as a substitute for steak: “Brush that cauliflower steak with bagna cauda or anchovy vinaigrette and you can pop the flavor. Adding a small amount of meat protein will raise the satiety level and you’ll end with a more gratifying dish.”

The Sun Shines On Sunchokes

Sunchokes, also called Jerusalem artichokes, have an intriguing and unique flavor, and they’re easy to prepare. “Just scrub, cut in half and roast,” says Ludwig. He says they play into today’s root-to-stem trend among chefs who use all parts of the vegetable. Among the dishes tasted by Ludwig and his team were sunchokes in brown butter, scalloped, oven-roasted with a nduja (an Italian sausage spread) vinaigrette, caramelized in a soup, paired in a salad with ricotta salata, combined with oyster mushrooms and supremes of orange, and served with lima beans, peanuts, green nettles and cheese.

While value-added items such as scrubbed, peeled sunchokes may not appeal to restaurant chefs, they may be likely to be more popular in the retail setting. Shoppers might want someone to take the hassle out of peeling and chopping this unfamiliar vegetable.

“Watermelon radishes are everywhere,” says Ludwig. “They deliver increased eye appeal because of their unique and dramatic look. We found them on crudité plates, as garnish and in salads.”

In season year-round, watermelon radishes should be displayed both whole and cut. A sliced or spiralized radish can add a bright pink pop to store-made salads and cut vegetable containers and platters. However, the uncut watermelon radish is not as appealing visually.

Along with watermelon radishes, the team from Gordon Food Service found maitake, or hen-of-the-woods, mushrooms on numerous menus. “The presentations were quite dramatic, with whole heads roasted, grilled or deep fried. Some chefs braised the mushrooms and served them on top of toast or polenta, often with cheese.”

Many suppliers to retail chains carry maitake mushrooms in their regular line of mushrooms.

“We tasted a lot of sandwiches layered with vegetables,” says Ludwig. “Many were completely meatless, but others layered multiple vegetables and fruits with a protein and were enhanced by richly flavored condiments and sauces.”

“The persimmon is highly underappreciated, but that is changing little by little as it shows up on more and more menus,” says Ludwig. “We tasted a persimmon sandwich with charred pancetta, a tartine of persimmon with black bread and lardo, a pork confit with persimmon garnish and a shaved persimmon salad.”

Retail customers might benefit from a guide for determining ripeness of different varieties of persimmons. A hard, tart, astringent unripe persimmon can turn off a shopper or diner.

“As a chef consultant in foodservice industry, I have sensed an overriding stigma among retail produce professionals that somehow fresh produce is always the supporting act rather than the star. But chefs are proving that produce no longer is served just in side dishes. The vegetable-centric trend is being driven and led by chefs. So people in the produce industry need to embrace, promote and advocate for vegetables and fruits.