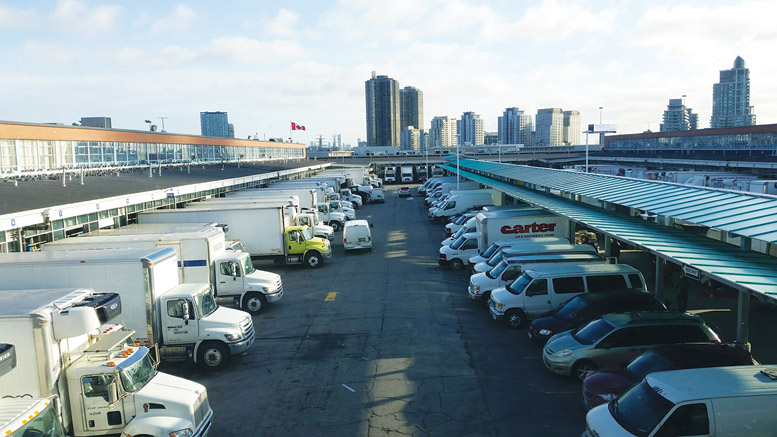 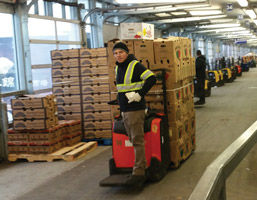 Produce families have deep roots in Toronto, many of them spanning three and four generations. Some began with pushcarts at the historic St. Lawrence Market in the early 1900s – until the opening of the Ontario Food Terminal (OFT) in 1954. Long-established companies such as Bamford, FG Lister, Dominion (parent company of Meschino Banana Co.), Ippolito, Burnac, Ontario Produce Company (now Gambles), and Chiovitti Banana — the first distributor of Chiquita brand in Toronto — are still going strong.

Whether through foodservice or retail grocers, these wholesalers have been providing the people of Ontario with fresh produce for more than a century. In the early days of the terminal, most shipments arrived by rail. Today, it boasts 40 acres — the largest produce distribution center in Canada — of prime real estate, near several main roads and highways.

The OFT’s tenants have the same issues as other terminals, including food safety, food waste and finding good labor. 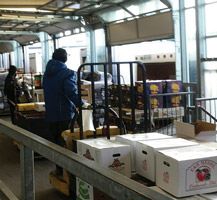 Steve Bamford’s fourth-generation family business began as James Bamford & Sons in 1881, located in Toronto’s St. Lawrence Market. After operating off-site for years, the family opened Fresh Advancements, a subsidiary of Bamford at the OFT in 2003.

The terminal helps small- and mid-size businesses thrive, while keeping prices competitive, says Bamford, chief executive of Fresh Advancements. “Without this facility hundreds of thousands of pounds of produce would go to waste each month.”

Because of overstock, companies often have more food than intended. Rather than discard time-sensitive food, Bamford’s company recovers the additional extra produce and finds a client to buy it, most likely for commercial use, fresh-cut or industrial use (such as using the better part of soft tomatoes for sauce). Aside from fresh-cut, Bamford’s company is also involved in packing, shipping and transportation.

“The Food Terminal’s location in the country’s biggest market — the Greater Toronto Area — means that consumers have better availability, choice, quality and price for fruits and vegetables than would otherwise be available to them,” says Bamford, who is vice president of the Toronto Wholesale Produce Association (TWPA), also housed in the terminal.

The Terminal not only employs 2,500 Ontarians, but it is also relied upon by independent grocers, restaurants and others throughout the Greater Toronto Area, says Bamford.

“Annual sales are close to $3 billion per year and in excess of $400 million worth of locally grown fruit and vegetables,” he says. “It’s a great central location for buyers. Without the terminal in its current location, we wouldn’t have the food distribution network we now have in place.”

Buyers like Tony Gabriele from Coppa’s Fresh Market, a four-store supermarket chain in the Toronto area, appreciate the convenience. He can find the popular produce items he needs and get the best deals to pass on to his customers.

Gabriele scans the selection to see what he can bring to customers at Coppa’s locations in Toronto. For independent retailers, buying from the terminal “gives us the competitive edge and puts us on a level playing field with the bigger chains,” says Gabriele. “We can play the vendors against each other and get better deals. It’s a one-stop shop, with everything from A to Z. I buy 98 percent of our produce from the terminal. I do very little business off-market.”

The OFT made recent upgrades, improvements and extensions to the facility included adding 35 new buyer loading docks and additional receiving/shipping space for cold storage. “It has increased efficiency, and now the buyers can load the trucks themselves, and there’s more space,” says Bamford.

Today, there are 21 produce companies at the terminal, along the busy Queensway in the Etobicoke area, in West Toronto. “We all used to be known for one product, but now we are increasing the number of varieties and quantities,” says Tony Fallico of FG Lister. “If we all carry the same things, it gets redundant.” Now, FG Lister sells grapes from Chile and all over the world, organics and bagged citrus, and fresh-cut produce for the foodservice industry.

Fallico’s oldest son, Michael, 35, is in the business too. “It’s a tough business,” says Fallico, who got his start in produce at age 14, working at the Terminal’s farmers’ market. “You have to marry the right person. We have long hours; we start at 3 a.m. and work all day, seven days a week.”

The company offers online ordering and delivery. And unlike at the OFT, the company’s specialty is offering just one item instead of cases, without a delivery minimum.

Value-added appeals to the Millennials, who are more willing to pay a premium to save time. “We see that in the meal-kit trend, which is not slowing down. That translates to revenue for us.” Another trend Bondi is seeing is build-your-own restaurants, such as IQ out of Toronto, Tractor from Vancouver, and Sweetgreen in the United States, which offer health-focused concepts with a high level of customization. 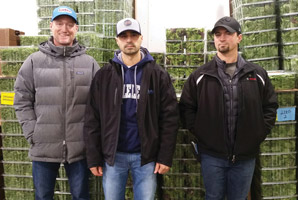 Back at the food terminal, showrooms display a full line of produce items, but most have a specialty. At FG Lister, it’s bagged citrus and organics; at J.E. Russell, it’s packaged salads; at Koornneef, it’s a commitment to local; at ever-busy Italian Produce, it’s berries. “We’re not too big of a house, but we’re a powerhouse,” says owner Vince Bruno.

Fred Koornneef and his brother, Adrian, inherited their father’s produce company, started in the early 1950s. It moved into the OFT 10 years ago. Today Koornneef Produce Ltd. continues to expand, outgrowing its old facility in Niagara. Koornneef is building a 65,000-sq-ft warehouse in Beamsville, about an hour and 15 minutes south of Toronto. “We acquired a piece of land and put a new warehouse on Queen Elizabeth Highway, with high exposure and more than double the space.”

With the third generation in place — son Marcus in management and nephew Bryan in shipping and receiving — Koornneef is confident in the business’s future. Koornneef’s specialty is local greenhouse vegetables. “We are strong supporters of local growers,” he says. “We do a better job of delivering local produce because it’s our specialty.” 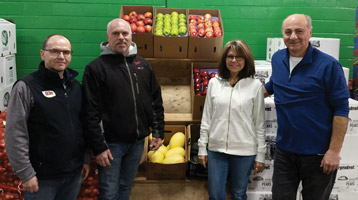 Entrepreneur Jackie Kwitko, who makes ice pops using real fruit, gets her bananas and spinach from the OFT. Since her Fressy Bessie Ice Lollies are becoming more popular, she needs to visit the terminal more often. “It’s convenient now, but I’m worried when the business grows, as it is, that I won’t have time to go down there. Or I may have to hire folks to bring produce to me.” Kwitko’s apples come from different sources, but she always buys Canadian.

“Toronto’s food terminal is unique,” says Michelle Broom, president of the Ontario Produce Marketing Association (OPMA). “The terminal is here for the industry — the restaurant owner, the smaller retailer, the corner store and the external distribution center.”

The OPMA represents the growers, importers, exporters, retailers and shippers in the produce industry to the consumer. One successful project is producemadesimple.com, launched in 2016. 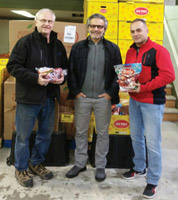 The average consumer no longer needs to be confused about how to select, store or prepare unfamiliar fruits and vegetables. Producemadesimple.com also teaches about local produce and seasonality, while offering recipes and meal-planning tips. The website has more than 120,000 followers across social media platforms and more than 9.3 million media impressions, says Emilia De Sousa, OPMA’s marketing and communications manager.

A New Advisory Board

The Ontario government has formed an agricultural advisory committee to “provide new perspectives on future growth for the sector,” says Ernie Hardeman, minister of Agriculture, Food and Rural Affairs. The committee plans to meet in March 2019.

Hardeman says he will work with agri-food business leaders on the issues that impact the industry and explore how to offer support now and for the long term.

Members of the advisory group are consulting with the farmers, buyers, distributors and consumers who use the facility. “We want to understand what they need to continue to thrive, and what we can do to ensure the food terminal’s long-term success,” says Hardeman.

“The group will look at a number of issues, including reducing red tape, encouraging young people to consider careers in agriculture, and the Ontario Food Terminal network,” says Hardeman, stressing the terminal’s key role in Ontario agriculture. “The group’s valuable insight will help inform policies and programs to foster growth and ensure they do not impose additional regulatory burden or costs on our farmers and agri-food businesses.”

The Minister’s Advisory Committee is chaired by Randy Pettapiece, parliamentary assistant to the minister of Agriculture, Food and Rural Affairs. Vice chairmen represent agri-food organizations, including the Ontario Federation of Agriculture, the Ontario Agri-Business Association and Food and Beverage Ontario. “We applaud the provincial government for looking at ways to reduce the regulatory burden on the agriculture industry and create economic growth,” says Bamford. “As an integrated part of the province’s agriculture system, we look forward to working with the provincial government on ways to create more jobs and reduce red tape.”

Multicultural, welcoming and progressive, Toronto has developed a unique personality. Well-loved by its residents and generations of families, it’s the largest and most diverse city in Canada, and it’s one of the fastest growing cities in North America and also a great food destination.