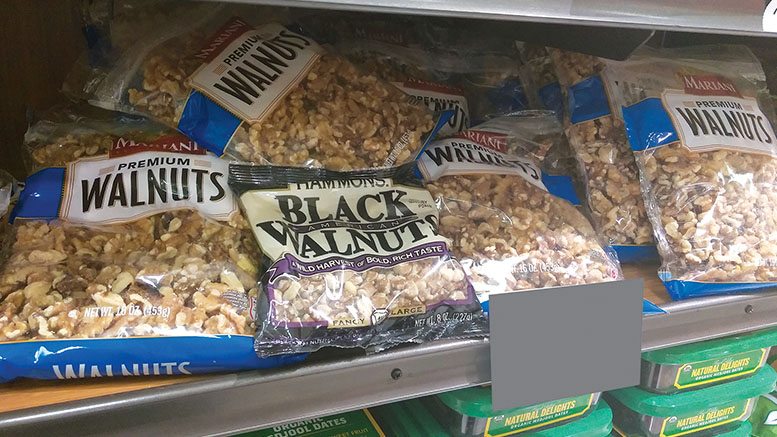 Though they don’t often receive a lot of attention by produce managers, walnuts are a small but an important part of produce sales. When supermarkets break up their buying teams into separate fruit and vegetable buying staffs, nuts seem to get left in the middle and don’t really receive a strong focus, according to marketers. Proper attention, however, can help increase sales.

In terms of dollar sales, walnuts garner a higher share of sales in the produce department than in center store. Walnuts are 10.5 percent of nut category sales in produce and 7.6 percent in grocery, according to a Nielsen FreshFacts report of the 52 weeks ending in late January. In volume, walnuts account for 8.3 percent of nut movement for the same period. The nut category represents $1 billion in yearly sales, about 1.5 percent of produce department’s $66 billion in yearly sales.

“Walnuts give you a lot of flexibility when you may have a lull in availability in some other items,” says Poindexter. “When one commodity is out of season, or one item is tailing off and the other isn’t really there yet to replace, you can create some space which walnuts typically fill. They can act as a good buffer and pillars for good produce displays.”

That versatility makes for a delicious accent to a baked good, the perfect crunchy topping on a salad or oatmeal or a healthy snack, says Craig Tokusato, chief marketing officer of Diamond of California, headquartered in Sacramento, CA. “As part of the broader nut category, walnuts are benefiting from the growing consumer interest in plant-based foods and category marketing efforts by the California Walnut Board,” he says.

Typically, walnut sales are steady throughout the year but during the holiday season, they experience major increases in demand, says Tokusato. As such, the best way to merchandise walnuts is through secondary displays, placing them in different parts of the store to remind consumers of their versatility and the many other occasions that would be even better with the addition of walnuts, he advises. 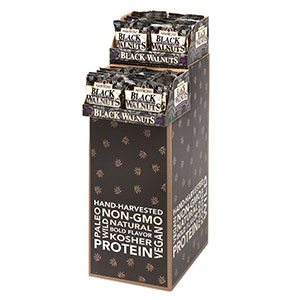 To inspire shoppers, Diamond of California is incorporating meal and snack solution ideas in its merchandising programs. “Consumers are overwhelmed with choices and short on time when they enter the supermarket,” says Tokusato. “We recommend finding simple meal and snack solution ideas to stand out and catch the attention of shoppers before they move on to the next item on their grocery list,” he says.

“The best way to take advantage of these healthy foods sale trends is to merchandise walnuts at the front of the produce departments, near the other nuts and salad toppers,” he says. Hartman recommends selling walnuts in clear containers or in overwraps. “I see a steady increase in my walnut sales,” he says. “I see a huge spike in sales. Holiday baking has and always will create a big spike in sales.”

Shipper displays, which include marketing verbiage on the sides of the cartons and displays, make for effective merchandising, says Jacob Basecke, vice president of sales and marketing for Hammons Products Co., which processes and ships black walnuts from Stockton, MO. “They showcase the nuts. They call out and grab attention, depending on how much space retailers have in their produce sections.”

Cross merchandising helps increase consumption. “Walnuts are becoming increasingly important in retail produce departments,” says Don Ladhoff, a retail consultant with the Folsom, CA-based California Walnut Board & Commission (CWB&C) “Retailers like the fact walnuts are fairly compact but have a higher dollar ring. They don’t take up a lot of space to merchandise adjacent to other items but can be a significant $6-8 kind of added ring with the berries and other items they are merchandised with.”

Walnuts don’t require extensive merchandising and offer many merchandising advantages over other fresh produce items, which can experience high shrink, says Poindexter. Because of little spoilage, walnuts don’t require as much space or expensive refrigeration to merchandise $100 worth of nuts vs. the same amount of lettuce. “When buyers buy packaged nuts, when they buy 100 pounds, they sell 100 pounds,” he says. “Nuts have a much lower loss ratio and lower operating costs. Stores should be able to pass along those savings with lower margins, which will help them move faster.”

Walnuts can be cross merchandised in a variety of areas. “What we see is how California walnuts are a complement to almost everything in the produce section, whether with a fruit or green salad or a side dish,” says Jennifer Olmstead, the CWB&C’s marketing director for domestic public relations. “We see a lot of opportunities to merchandise walnuts by placing them close to or adjacent to those complementary produce items.”

The industry must push walnuts in snacking, says Richard Sambado, president of Primavera Marketing, headquartered in Linden, CA. “I think the future of walnut sales is snacking,” he says. “It is up to us as an industry to help walnut retailers do more in their produce departments.”

A key part of moving walnuts to snacking is promoting freshness. Sambado says he recently tasted rancid walnuts on a flight. “We have to do a better job of freshness and dive more into the snack category with a 1.5-ounce pack. We have to reinvent the wheel.”

Snack use is growing, says Olmstead. For the first time, the Commission’s 2017 Attitudes and Usage Survey showed snacking the top walnut use, trading spots with baking. “We are really seeing the growth in the ways consumers are using walnuts, in snacking and in salad use,” she says. “We are seeing a lot of growth in uses to a healthier lifestyle.”

“People who are buying walnuts year-round are buying them because of the health and nutrition benefits,” says Olmstead. “It goes back to the fact people are looking to include walnuts in more nutritious ways and are eating on a more year-round basis. They’re looking for things besides baking. In today’s world, snacking in general is such a big part of peoples’ lives.”

Truly Good Foods’ Hartman recommends retailers not forget about merchandising black walnuts. “They are a much smaller market,” he says. “Although often not wanted because of their bold taste, they make a great addition as a topper or as a baking ingredient.”

A good way to merchandise black walnuts is by including them in displays including the standard almonds, pecans and walnuts as well as the Brazilian nuts, the hazelnuts and pine nuts, explains Basecke. “Some of the best advice is making sure retailers sell a wide selection of nuts,” he says. “By incorporating new types of nuts and new flavors that people may not be familiar with, it gives shoppers a better variety and selection.”