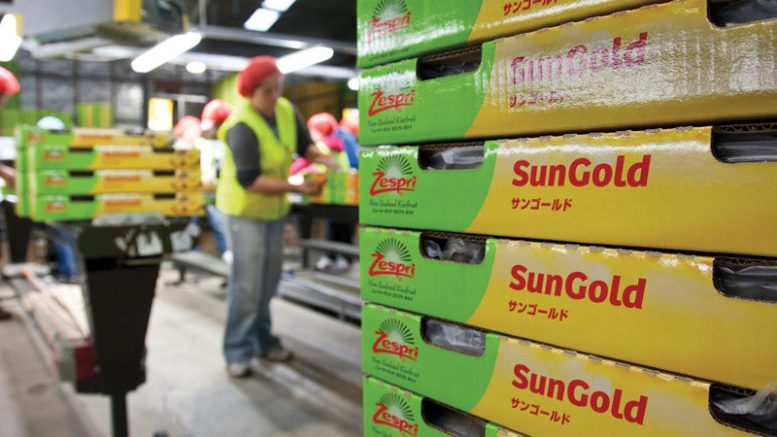 Understanding the variety and innovation in Australia and New Zealand fruit provides a base for successful merchandising and promotion.

As Australia and New Zealand grow in both volume and variety, U.S. and Canadian retailers harness the fruits of their labors to extend sales. “There have been a few big game changers in the produce business during the past 20 years, and one of them is the Australian Navel orange development,” says Alfonso Cano, produce director for Northgate Gonzalez Markets in Anaheim, CA. “The variety and quality from Australia and New Zealand are crucial to filling out our department in key products during certain time periods.”

New Zealand and Australian apples and citrus keep Harps Food Stores Inc. in Springdale, AR stocked with varieties not available for weeks or even months. “It helps sustain categories or parts of categories that would otherwise struggle during certain time frames and gives the consumer more to choose from,” says Mike Roberts, produce merchandiser for Harps, operating 80 stores in three states.

Just two decades ago, exports from Australia and New Zealand to the U.S. market were scarce. “In the early 1990s, Australia commenced exports of predominantly Navel oranges during the U.S. off-season,” reports Michael Worthington, chief executive of Produce Marketing Association Australia-New Zealand in Melbourne, Victoria, Australia (PMA-A-NZ). “This [process] was done through a single importer [Fort Pierce, FL-based DNE World Fruit], and Australian exporter, Riversun — on behalf of leading citrus exporters. This export now continues, although with multiple exporters and importers all under increasing competition from Chile, Peru and South Africa.”

Total New Zealand fruit export value to the U.S. is close to NZ$100 million (approximately US$68 million) according to Alan Pollard, chief executive at Pipfruit New Zealand in Hastings, New Zealand. “Pipfruit (apples and pears) and kiwifruit make up the bulk of this,” he relates. “A variety of other products tested the U.S. market, and some are quietly doing well — including plums, lemons, persimmons and avocados.”

The counter-seasonal nature of trade with Australia and New Zealand presents exceptional advantage. “It is important to have these items year-round,” says Jack Cannon, sales manager/Australian team leader for DNE World Fruit LLC in Fort Pierce, FL. “Australian citrus items are counter-seasonal to the California domestic crop, and customers are accustomed to enjoying summer citrus from Australia for its flavor, convenience, and value.”

Customer expectation for product 365 days per year means Northgate counts on counter-seasonal supply. “No one says, ‘because it’s not in season we don’t expect much,’” states Cano. “Our customers expect the best at all times; so if we want repeat purchases, we need good consistent counter-seasonal supply and Australia/New Zealand deliver this.”

Giumarra markets kiwifruit, apples, and pears from New Zealand and mangos, apricots, and cherries from Australia. “They complement the U.S. because of their Southern Hemisphere location,” reports Jason Bushong, division manager for Giumarra Wenatchee of the Giumarra Companies.

“The counter-seasonal nature of trade with Australia and New Zealand presents exceptional advantage.”

Retailers are urged to understand essential products from this region and how they fit into market windows. DNE reports the Australian Navel season normally starts the first week of July and runs through October. “The main item is the Navel orange, which runs the length of the season,” says Cannon. “Other items Australia sends include Daisy mandarins, Aussie Sweets, Minneolas, Blood Oranges, and Cara Caras. The Navel flavor profile is similar to domestic Navels while the Minneolas tend to be slightly more tart in their profile.”

In 2010, Zespri began marketing a new variety of gold kiwifruit, the Zespri SunGold. “In 2015, we took the SunGold kiwifruit to the U.S. market in greater volume — selling 1.4 million trays,” reports Pollard. “We plan to build on this success in the season ahead, which starts with arrivals from mid-May.”

Kiwi is a high use item for Dorothy Lane. “We use kiwi in our fruit bowls and fruit trays in addition to selling it as a separate item,” says Mayhew. “It’s become as common as strawberries; we go through a lot of kiwi in our stores.”

Get Out The Message

Summer is a perfect backdrop for promoting new crop freshness. “Australian citrus can be enjoyed in fruit salads at the backyard barbecues, toted along in the picnic baskets, or shared on the hiking trail,” suggests DNE’s Cannon.

“Online contests are a useful vehicle to educate and excite consumers about specific products and grower stories.”

Giumarra’s Bushong suggests promoting across a variety of channels to strengthen the message, including in-store and on social media. “Online contests are a useful vehicle to educate and excite consumers about specific products and grower stories,” he explains. “Consider highlighting the unique growing story of New Zealand and/or Australia to generate consumer interest in products of that region.”

Adequate preparation is the first step to merchandising success. “Pre-season planning and communication allows DNE to ensure necessary promotional volumes are initially loaded on the vessels and secondly earmarked for the specific retailer,” advises Cannon. “Because the arrival volumes are finite, it is critical supplier and retailer work closely together regarding item volume needs and timing.”

Zespri expects the kiwifruit season will start with Zespri Green, SunGold and organic product in the U.S. market from mid-May and be widely available. “An extensive marketing campaign will support the program and aim to re-introduce Zespri Kiwifruit to North America consumers,” says Arrowsmith.

DNE reports the upcoming navel crop is projected to peak on the larger size. “A per-pound retail rather than by-the-each would be suggested,” advises Cannon. “Also Daisy mandarins, known for their bold and aromatic flavor and moderate seeds, generally have good size and keep well allowing for successful promotion in bulk. Look to promote them early in the summer season, late June through mid-July. The flavorsome, easy-to-peel, Aussie Sweet mandarins will be very promotable in 2- or 3-pound bags in August/September — an excellent window of opportunity for driving incremental sales dollars.”

Retailers looking to increase tropical and exotic offerings can look far south for supply. Robert Schueller, director of public relations for Melissa’s Produce in Los Angeles, CA, reports many unique items from New Zealand complement current supply: passion fruit from February through June; Kiwano Melon from January to May; feijoa from March through June; Meyer lemons from August to September; baby kiwi from mid-February through March; figs in March and April; and tamarillo from March through September. For Australian tropical fruits, Schueller lists the following: mango and lychee from December through February; as well as Blood and Cara Cara Oranges from early September through mid-October.

Continued progress in admissibility of products from this region support market development for specialties. “Trade opened the door to unique fruits during the past five years such as baby kiwi, figs and Meyer lemons,” explains Schueller. “The addition of mango and lychee in this last year from Australia opens up opportunities in fruits already demanded in the marketplace.” Alfonso Cano, produce director for Northgate Gonzalez Markets in Anaheim, CA, views Australian mangos as another game changer. “Melissa’s brought us some Australian mangos this year, and they were amazing,” he says. “It’s a tough business currently, because of the competition. In the future, these mangos have tremendous potential.”

Australia and its importers are also bullish on lychees. Recently granted market access into the U.S., Australia produces approximately 3,500 to 4,000 tons of lychees each year with exports estimated to be worth AUS$18 to $20 million (about US$12 to $14 million), as reported by Australia’s Department of Agriculture and Water Resources.

Specialty products and new varieties provide opportunity for retailers to create a premium product as evidenced by Northgate’s orientation. “New varieties bring excitement and novelty to the department and give a chance for extra profits by selling something at a premium rate,” explains Cano. “If we bring in a Gold kiwi or an Envy apple, we can promote it but not as a price-sensitive item.”

Increasing availability of specialty fruits provides Dorothy Lane with a differentiation tool. “Our customers like the uniqueness of specialty items,” says Michelle Mayhew, produce director at the retailer. “Our customers travel and are experiencing these products so having them in our store gives us an edge.”