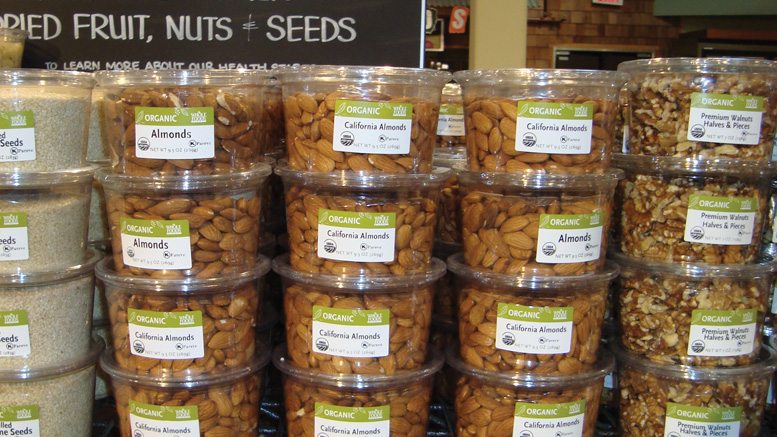 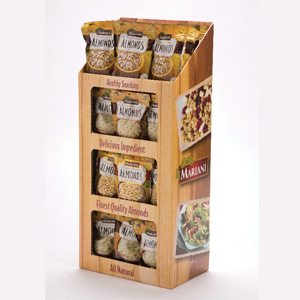 The ancient Romans believed almonds were talismans of fertility. But in the 1700s, when the first almond trees made their way to California from Spain, poor weather conditions thwarted a perfect match. But timing, as they say, really is everything. By 1900, almonds were rooted in the heart of California’s agricultural industry, which today produces 80 percent of the world’s supply. Maybe the Romans were on to something after all.

Whether slivered, flavored, roasted or transformed into a flour, milk, butter or oil, almonds maintain dominance as one of America’s favorite tree nut. With 2015-16 domestic per capita consumption measured at 1.94 pounds, according to the USDA Economic Research Service, produce executives are following the abundant opportunities these best-selling nuts present.

“People like to buy nuts in the produce department,” says Larry Griffith, Midwest business manager for the Mariani Nut Company, a family owned grower and processor of almonds and walnuts in Winters, CA. “They perceive them to be fresher. And the produce people love it because most of them will make a 40 percent margin with zero shrink. All the nuts we ship in will have at least a year’s shelf life.”

Chad Hartman, director of marketing for Charlotte, NC-based Truly Good Foods, offers these observations on placement for packaged or bulk almonds: “Either way, the best place to put them is in a highly visible area, along with other nuts. Stand-alone almonds will not cut it, but if you merchandise them with other snack or baking nuts (bulk or packaged), you create a higher awareness and somewhat of a destination.”

Griffith says the value of choosing and maintaining a location for almonds is tangible. “The main thing we see happening, to be successful, is to have a permanent home for the product. We do a lot of business with Publix, and they keep our product on a shelf in the same place in all their stores. They sell a lot of nuts. If they get moved — if the whole program moves to the center of the store, say the baking aisle — it almost cuts the business in half. We have data to show that,” he says.

But an additional baking display, well that’s another thing altogether, Griffith says. “During the holidays, good grocers will do a display up front with almonds, walnuts, and pecans.”

Almond sales used to spike dramatically in the fourth quarter, and Griffith says there is still a slight “bump” for the holidays. But consistent year-round sales levels are becoming the norm. “Nuts are selling year-round,” says Griffith. “You see all that health information out there on nuts. Doctors say eat them.”

Marketing the healthful aspects of almonds continues to power the growth of year-round sales.

Adam Cooper, vice president of Wonderful Pistachios & Almonds, Los Angeles, says the right location reinforces the almond’s nutritional value. “The strategic placement of Wonderful pistachios and almonds next to produce makes it easy for consumers to see our product as a healthy food rather than a traditional salty snack found in the junk food aisle alongside chips,” he says. 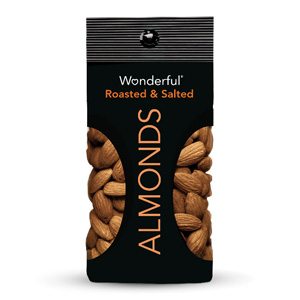 Wonderful launched its almond line in 2012 after research showed 70 percent of its pistachio-buying customers also purchase almonds. The brand, Cooper says, is a favorite among “snackthusiasts who are committed to leading a healthy and balanced lifestyle through their snack choices and activities.”

Almonds continue to earn the U.S. Food and Drug Administration’s “healthy” food imprimatur: “Scientific evidence suggests, but does not prove, that eating 1.5 ounces per day of most nuts, such as almonds, as part of a diet low in saturated fat and cholesterol may reduce the risk of heart disease.”

“A nutritional powerhouse of essential vitamins and minerals, packed with six grams of protein, four grams of fiber and ‘good’ monounsaturated fats, California almonds offer unique benefits as a product available year-round,” says Molly Spence, director of North America for the Almond Board of California, based in Modesto, CA. “A snack for any occasion and a versatile ingredient in endless recipe formulations, almonds offer extensive versatility for produce executives and consumers alike.”

Hartman agrees that almonds have become the “go-to nut for healthy eating,” and they are widely featured in the 3,000-plus Truly Good Foods line of snacks. “We have a couple of different products that we target to not only demographics but the lifestyle,” he says. “We have a 1-oz. trEAT4u package of almonds targeted to an active grab-n-go lifestyle, primarily made up of Millennials and younger Xers. We also have an almond tub targeted to the healthy grocery shopper who is looking to have almonds in the home, typically Gen-Xers and young Boomers with children still at home.”

In April 2017, when the ShopRite chain’s 130 in-store dietitians compiled their “Top 10 Picks” for healthy eating, almonds took top billing, according to Natalie Menza-Crowe, RD, MS, director of Health and Wellness at ShopRite. “The No. 1 pick was almonds, which contain essential nutrients, including protein, fiber, and heart-healthy fats. By identifying these great foods and offering suggested recipes and snack ideas that incorporate them, we show how healthy eating can be easy, accessible and delicious,” she said in a press release. (The other nine picks included chickpeas, blueberries, kale, Greek yogurt, avocado, flax seeds, quinoa, eggs, and salmon.)

Retailers also promote almonds by showcasing their versatility in the recipes they develop for customers. These recipes sometimes take the nut into a more playful realm, as with Albertsons’ Screaming Sports Mix, a lively blend of almonds, chili sauce, popcorn, and Cheetos. Publix includes almonds in a wide range of its Publix Aprons recipes, many of them produce-boosters like Arugula-Almond Salad.

“We’re currently focused on our popular Roasted & Salted and Natural Raw flavors,” says Wonderful’s Cooper, “but we’re always open to evolving the brand based on industry trends and demand.”

“For the most part, our top sellers are bulk almonds and mixed nuts in bulk,” says Hartman. “The trend we are seeing is that many people are moving to snack mixes containing almonds, and snack mixes in general. Mixes provide a similar nutritional profile while blending flavors of nuts and dried fruit.”

According to the Almond Board’s Spence, the snack nuts category represents the largest share of almond volume, with 56.9 percent of all volume, followed by milk substitutes at 15.7 percent and chocolate at 9.8 percent. “We are expecting to see sustained growth in these categories, particularly as flavored nuts and innovative snack mixes become staples in some consumer shopping carts. Global flavor influences and natural ingredients are trends we see holding true across all categories as consumers continue to seek out interesting flavors with a clean label they can feel good about eating regularly,” she says.

At Truly Good Foods, hickory-smoked is the perennial favorite flavor, according to Hartman. “We are always looking for new flavor profiles, and we are seeing sweet and spicy profiles become more popular,” he says.

Mariani Nut Company offers its own line of sweet and savory almonds, with flavor combinations that include wasabi and soy, chili lime and vanilla. The company also markets its own California-grown Marcona almonds. “It’s a lot cheaper if you don’t have to ship the nuts from Spain,” says Griffith. “We are able to process, package and sell them for a lot less. Ours are 6 ounces for $4.99. If you go into a fancy food department, you’ll see 3 ounces for $10. I guarantee you can’t tell the difference.”

As almonds continue in the role of “hero nut,” as the Almond Board has called them, the latest crop forecast is looking strong.

“We’ll have actual production figures for the 2017-18 crop year confirmed in July 2018, but we are expecting it to be a great production year for California almonds,” says Spence. “The annual Objective Forecast, announced in July 2017, indicated that we can expect a crop that will exceed 2 billion pounds, which means that almonds will continue to be a safe and stable ingredient produce executives can count on and consumers can feel good about choosing year-round.”