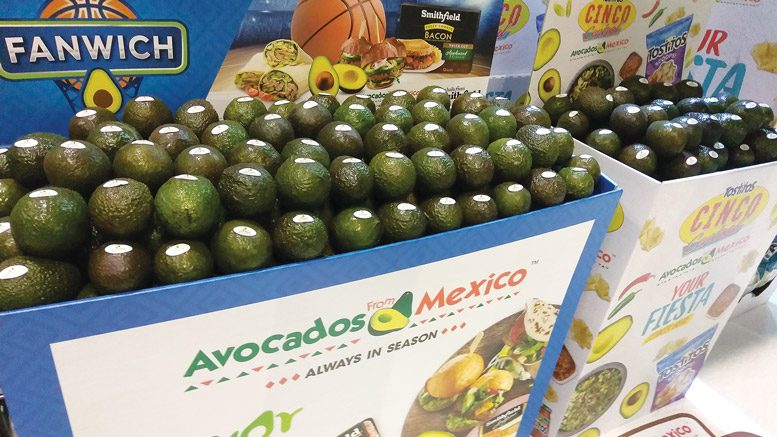 As U.S. consumption rises, here are eight ways to profit from the fruit’s popularity.

Avocados definitely add green to the produce department. Not only does this fruit’s hue brighten up in-store displays, but its tint is synonymous with extra dollars in the till. That’s because avocados, far from their start as an ethnic-niched market item, have soared into mainstream acceptance. Witness the fruit’s starring role in a Super Bowl ad, a game that most recently captured the attention of nearly one-third of American viewers nationwide. More specifically, per capita consumption of fresh avocados in the United States has soared from 2.21 pounds in 2000/2001 to 7.47 pounds in 2017/2018, according to USDA Economic Research Service data released in October 2018.

“We’ve seen double-digit growth in avocado sales for eight years in a row now, and as a result, avocados are a larger percent of our total produce sales and growing,” says Jeff Cady, director of produce and floral at Tops Friendly Markets, a 159-store chain headquartered in Williamsville, NY.
Here are eight ways to green up the produce department even more:

Demand for avocados in the United States has outpaced supply for the past couple of years. For demand to continue to grow, there needs to be a steady supply of good quality avocados in the market, with no supply disruptions. This is indeed the scenario shaping up.

“The year 2019 should be a record volume for avocados sold in the United States,” according to Giovanni Cavaletto, vice president of sourcing for Index Fresh, in Riverside, CA. “Mexico is having an ‘on’ year and is adding significant numbers of acres. In addition, Mexico is expected to add more states that can ship to the United States; exports are currently limited to the state of Michoacán. Peru is on track to reach one billion pounds of Hass production within the next five years. That means we should see steady increases in avocado supply to continue for the future.”

Mexico’s primary avocado season is October to May.

“The annual growth rate out of Mexico continues to run 5 to 7 percent,” says Keith Slattery, president of Stonehill Produce, an importer of Hass avocados from Mexico, based in Dana Point, CA. “This is expected to continue for the next five-plus years, or in other words, 2.1 billion pounds plus a 6.5 percent growth factor. Peru and Colombia are growing at 10 to 15 percent, with most of this volume to be used to cover the European market as it continues to increase in demand. With Peru and Colombia supplying Europe, there is less pressure on Mexico to export, and this could lead to increased supply to the United States.”

California will have a smaller crop this year.

“The full 2018/2019 season forecast for California avocados is 175 million pounds, or a reduction from the 2017/2018 season due to weather issues,” says Jan DeLyser, vice president of marketing for the California Avocado Commission (CAC), in Irvine, CA. “Distribution this year will be targeted to the West, although we anticipate there will be plenty of supply for these retailers for their spring and summer programs.”

Chile is a smaller supplier of avocados to the United States during its September to March season. However, the United States is the second largest export market for this South American country’s fruit at 66 million pounds shipped in 2017/18. Estimates are for a similar volume in 2018/19.

“In the past few years, the North American market has seen some major supply ‘hiccups’ from other key origins, so more retailers (both national and regional) are looking to Chile as another supply option for avocados,” says Karen Brux, the San Carlos, CA-based North American managing director of the Chilean Fresh Fruit Association (CFFA). “Chile fills a very interesting niche, and we definitely see opportunities to further expand our retail partnerships in the coming season and beyond.”

Approximately 95 percent of avocados sold in the United States are the Hass variety, according to the Hass Avocado Board (HAB), in Mission Viejo, CA. Among the rest are up to 60 smooth, kelly-green skinned varieties grown in Florida and the Caribbean.

“Looking ahead, after Hurricane Irma impacted last year’s Florida crop, we see the pairing of harvests in Florida and the Dominican Republic as a great combination to meet demand,” says Mary Ostlund, marketing director for Brooks Tropicals, in Homestead, FL, which markets these varieties under the single brand name of SlimCado. “The combination of two distinct geographical growing areas has also helped to extend the overall season for this fruit. We’re projecting SlimCado season, which starts in June, to now go through April.”

“We don’t carry bags because our customers prefer large — rather than small — fruit, but we will sometimes carry the green-skinned Fuertes,” says Brian Haire, Keil’s general manager.

“We’ve dabbled with two sizes of conventional fruit in the past but found that the cashiers would get confused on the correct ring. Currently, we’re implementing a GTIN (Global Trade Item Number) system. Once that’s in place, I plan to explore the opportunities for two sizes again,” says Cady.

Many heavy and medium users identify uses of avocados based on the fruit’s size, according to Maggie Bezart-Hall, vice president for trade and promotion for Avocados from Mexico (AFM), in Irving, TX. “For example, large avocados are used for guacamole, medium avocados are used for sandwiches and salads, and small avocados are a great option for a healthy snack. Also, differently sized avocados will allow for various prices points, appealing to shoppers.”

Mission Produce has found particular success with its recent Minis, a 2-pound bag of 8 to 10 ‘single-serve’ or 3.5-ounce size avocados. “This is now one of our bigger programs,” says Denise Junqueiro, director of marketing for Mission Produce Inc., in Oxnard, CA, of the company’s Minis program.

An increase in the number of SKUs usually translates into greater sales. “Some retailers carry as many as six different offerings, including bulk large and small conventional, one to two organic offerings (both bulk and bag), as well as one to two conventional bag options,” says Dionysios Christou, vice president of marketing for Del Monte Fresh Produce NA, in Coral Gables, FL. “Identifying the consumers’ needs in each market is crucial in determining how many SKUs, and particularly which SKUs, to offer.”

Ripe avocados outsell green avocados by two-to-one or three-to-one, according to Peter Shore, director of business development and marketing for Calavo Growers, in Santa Paula, CA. “Sometimes, it’s as much as four to one, depending on price and holiday.”

Del Monte’s Christou agrees: “Our 23 distribution centers in North America allow us to provide pre-conditioned programs so that retailers can offer consumers ready-to-eat fruit on their displays. About 85 percent of our avocados shipped to retailers are preconditioned, and we estimate that at least 67 percent of retailers have a conditioned program.”

Maintaining various ripe stages in-store is key. “Around holidays, consumers may not plan far ahead, so we recommend retailers feature several avocados at the ripened stage to accommodate for shoppers’ same-day celebrations,” explains AFM’s Bezart-Hall.

The top two reasons consumers purchase avocados is they are considered healthy and contain good fats, according to HAB’s Alejandro Gavito, category data and research manager. “Year over year, we track that the higher the conviction in these two beliefs, the higher the consumption. We know there is strategic value and impact on sales from spreading education about the many health benefits of fresh avocados.”

Nutrients and phytonutrients in avocados such as folate, vitamin E, lutein and zeaxanthin, monounsaturated fats and dietary fiber make this fruit a nutritious first food for 1- to 3-year old toddlers.

“For retailers who have baby- and toddler-themed programs such as direct mailers or dietitian newsletters, the suggestion of mashed avocado for baby food is perfect,” says the CAC’s DeLyser. “For programs targeting older children, I recommend keeping it simple, such as a half of an avocado and a spoon.”

“Traditionally, guacamole has been the gateway recipe for consumers new to the category, and in many cases guacamole demos and themed feature ads are still great ideas. However, incorporating avocados with a variety of cuisines and usage ideas can be beneficial in making them indispensable. For example, one of America’s most popular restaurant dishes that uses avocado is California Roll sushi,” says the CAC’s DeLyser.

For 2019, says HAB’s Gavito, “we see a strategic opportunity to increase sales by fueling interest in avocado at breakfast and as a snack. So, look for new recipes and supporting promotions around these usage occasions soon.”

Salsa and salsa ingredients, as well as chips and beer, are integrated into avocado displays at Keil’s Fresh Food Stores to build the basket ring and capture incremental sales, says Haire.

Most avocados are displayed next to tomatoes as they provide the perfect color-break and pairs well together with guacamole, salads and handhelds such as sandwiches, tacos, burritos and hamburgers, according to AFM’s Bezart-Hall. “Creating a guac station can also increase the sales of avocados and complementary items in the department that do not require refrigeration, such as tomatoes, onions, etc. Additionally, featuring avocados with other department items, such as tortillas, tortilla chips, hamburger buns, salsa and beverages offers shoppers a look at the versatility of avocados and creates additional sales throughout the store.”

Price and promotion are key to moving volume.

“It’s important to understand the consumer’s tipping point,” explains Stonehill Produce’s Slattery. “In general, the ideal price point seems to be $0.99 each. … Normal ad promotions in developed avocado regions around non-avocado holidays at a slightly higher retail price ($1.29/each versus $0.99/each) won’t lead to a drop in volume, plus it allows the retailer to earn a higher margin. Deep discounts could need to be utilized in emerging avocado markets.”

Larger-sized avocados are somewhat more sensitive to price fluctuations because they generally are more expensive, according to the CAC’s DeLyser. “Therefore, a change in price (up or down) is more apparent to the consumer than with smaller sizes. Additionally, a limited-time promotional discount appears to be more effective at increasing sales than a reduction in the everyday base price. Finally, retailers should not promote the entire category at one time. Instead, select a specific PLU/SKU to promote. Moreover, we suggest retailers do not promote on a routine schedule of every-other week as it can train shoppers to purchase avocados on a bi-weekly schedule.”

Regarding seasonal windows of opportunity, the CAC’s DeLyser says more could be done with avocados in February for American Heart Month. “Retailers could retool Big Game displays with heart-themed point of sales, booklets that include recipes certified by the American Heart Association and retail dietitian communication to make this a bigger deal.”