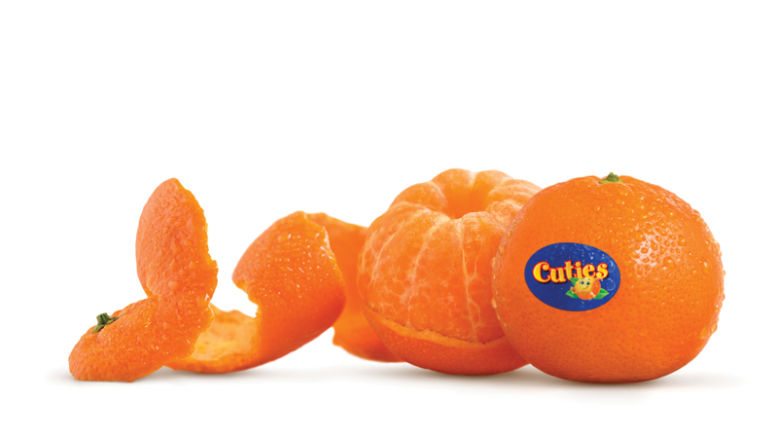 Convenience and taste push this citrus from ‘the Golden State’ beyond most varieties.

Mandarins have climbed to the top of the fresh citrus category as the sweeter, easier to peel, kid-sized, less messy alternative. And all signs point toward continued double-digit growth of the popular varieties from Satsumas to Gold Nuggets harvested and shipped from California’s Central Valley from November to March.

“Mandarins lead all citrus categories in dollar sales at retail, representing almost 37 percent of all citrus sales for the past year,” says Joan Wickham, manager for advertising and public relations at Sunkist Growers, Valencia, CA, who says dollar sales are up 17 percent over a year ago. “Mandarins also lead in pound sales, up just over 19 percent. Demand for this category continues to grow, so we are looking forward to another strong year in 2016.”

This Is Kids Stuff 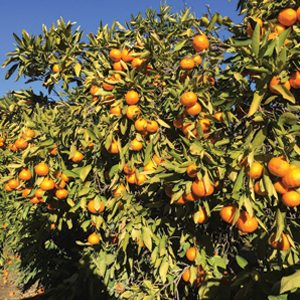 can feel good about feeding their children. “Sun Pacific and Wonderful Citrus are spending millions of dollars promoting Cuties and Halos, and it’s been very effective,” says Miles Fraser-Jones, vice president of AMC Direct, Glassboro, NJ. “They are advertising for kids. They are targeting mothers with small kids looking for healthy snacks. The focus group is kids.” The campaign, which began early this century, took Cuties to the top and was an immediate success.

“Sun Pacific launched the Cuties brand in the early 2000s, and from an early stage, we saw a quick growth in demand,” says Victoria Nuevo-Celeste, vice president for marketing at Sun Pacific, Pasadena, CA. “Cuties are a perfect snack for kids. They are sweet, seedless and easy to peel, loved by moms and kids alike.”

You can expect continuing prominent promotion of this healthy food that tastes as “sweet as candy.”

“Cuties is the fastest selling brand in the market,” says Nuevo-Celeste. “This year, Cuties is connecting with consumers by encouraging a swap of those inevitable candy cravings, especially during the holidays. Our marketing campaign, ‘Sweet as Candy,’ includes the catchy radio jingle ‘I want Cuties,’ which is our remake of the 1980’s Brit-Pop hit, ‘I want Candy’ on print, digital, social media, billboards and point-of-sale materials.”

In some cases, increasing Mandarin sales is almost as easy as the proverbial: “pile ’em high, and watch ’em fly.”

“Our favorite and best-selling Mandarin is Satsuma with stem and leaves. I guess customers think it is fresher. Every year there is more demand for Mandarins, and we are expecting an increase in 2016.”

“We have a customer in Denver called H Mart,” says James Macek, president of Cooseman’s Denver, Denver, CO. “Their store is mainly an Asian outlet. The retailer stocks Mandarins, Clementines and tangerines. Product is merchandised on 200-case displays.” Much of the citrus’ appeal is that they are a treat that is actually good for you and for your kids.

“Today, we have a very health-conscious society,” says Macek. “People are looking at what they eat and asking, ‘Is it good, and is it good for me?’”

The best way to display the fruit differs among the diverse Mandarin or Mandarin-like varieties. “Clementines seems to do best in bags or little boxes, while the Satsumas are quite popular sold loose,” says Simcha Weinstein, director of marketing at Albert’s Organics, Swedesboro, NJ. There is a visual appeal that can be helpful in moving the shinier-skinned varieties. 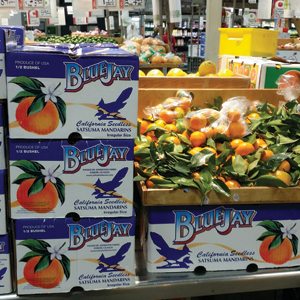 “The Clementines seem to do well for several reasons,” says Weinstein. “Their shiny skin has the initial eye appeal; and once shoppers open them, they are such a managable piece of fruit. They peel with incredible ease, they are typically seedless, and they segment easily once peeled.”

“The 12-pound boxes of Satsuma Mandarins are the best sellers,” says Hyunsil Ahn Choung, produce manager at Dekalb Farmers Market, Decatur, GA. “Our favorite and best-selling Mandarin is Satsuma with stem and leaves. I guess customers think it is fresher. Every year there is more demand for Mandarins, and we are expecting an increase in 2016.”

While Mandarins already rocketed to the top of the fresh citrus category, the days of double-digit growth continue.

“During Season 2013-14, Mandarins surpassed oranges by more than 20 percent, with the Mandarin category reaching more than $1 billion in sales,” says Sun Pacific’s Nuevo-Celeste. “Demand for Mandarins continues to increase every year at a rate of 20 to 30 percent, and we certainly expect the same level of demand growth for the 2015-16 season, weather permitting.”

Organic Satsumas enjoyed early success in the produce sections of natural foods stores, and its unique look — while not quite pretty in any classical sense — it is still familiar and well received.

“The Satsumas have always done well — especially organic Satsumas,” says Weinstein. “Long before they were popular in conventional supermarkets, the Satsumas were a treat for natural-food-store shoppers. Their ‘loose’ skin has long been a favorite and their mild flavor has quite the appeal.”

“Mandarins are also trending in foodservice channels, with operators showcasing the versatility of easy-peelers in applications such as adult beverages, salads, desserts and seafood appetizers.”

Demand for the organic has been so strong for Homegrown Organic Farms of Porterville, CA, like many conventional growers, opted to plant or replant ground in Mandarins given the next opportunity.

“We have young Mandarin acreage in the ground that is just coming into production,” says Craig Morris, citrus category manager at Homegrown. “Demand is absolutely growing. This year, in particular, we saw tremendous demand for organic.” Demand for organic Mandarins is so strong that supply has not yet come close to catching up. “I would guess there is about a 30 percent premium for organic Mandarins,” says Morris. “The production could grow by another 30 to 40 percent without affecting returns.”

Many fresh Mandarins and tangerines grown in the country, like most of the fresh oranges, are shipped out of California. “The major source is California’s Central 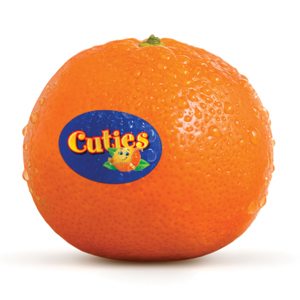 Valley,” says Choung of DeKalb Farmers Market. “I think the growth of Mandarins is at the expense of tangerines and oranges. When Mandarin sales were up, tangerine sales were a bit down.”

There is a blurring of the lines between Mandarins and tangerines, because both are smaller, sweeter, and easier to peel fresh citrus alternatives. The California Mandarin and tangerine varieties are both so popular they significantly impacted demand. There are enough types of Mandarins suitable for California production that many growers planted numerous varieties that, when harvested in sequence, allow them to ship fresh fruit almost continuously during a five-month window.

Homegrown Organic Farms, for example, harvests the Satsuma, Clementine, W. Murcott, Tango and Gold Nugget varieties in that order, which lets them supply fresh Mandarins from November to the middle of March with a brief hiatus in early January, according to Morris.

Growth of this new leader in fresh citrus has been staggering, but it has not yet reached its peak. “I think the Mandarins are still increasing in popularity,” says Jocelyn Carter-Seto, general manager at Oak Acre Farms, Live Oak, CA. “The popularity of oranges, in general, has gone down. The demand is going to be there next year.”

We are still at the point that growers in California’s Central Valley find more Mandarins a profitable alternative. “Demand for Mandarins is increasing, but it’s not that hard to get them. At some point, the price will come down,” says Jim Marderosian, owner of Bee Sweet Citrus, Fowler, CA.

Many tree fruit and nut growers choose periods of droughts as the time to replant their older, less productive orchards, because the young trees need less water than mature trees the first few years.

When tens of thousands of acres of California citrus trees were replanted during the drought, much of the new acreage was in Mandarin trees that will begin producing even larger crops over the next few years.

“A lot of the new trees are Mandarins,” says Marderosian. “When they’re new, price drives it, and high production per acre. Some of the older citrus trees were only getting 15- to 20-bins-per-acre during the drought. Mandarins can handle the drought a little better. With the higher water costs, people look at crops that support less water.”

Bee Sweet replanted in Mandarins as part of building a portfolio of popular citrus items. “We at Bee Sweet still have a lot of Mandarins coming into production, but we’re diversified,” says Marderosian. “We also have a lot of the exotic oranges and some lemons.”

The End Is Not In Sight

This market is extending to foodservice outlets as restaurants and other institutions are finding new uses for this sweet fruit. “Mandarins are also trending in foodservice channels, with operators showcasing the versatility of easy-peelers in applications such as adult beverages, salads, desserts and seafood appetizers,” says Sunkist’s Wickham. “Clementines show a particularly strong increase on menus, with a nearly 40 percent spike over the past year, driven mainly by increased use in beverages.” Mandarins continue to grow in popularity because they are, in so many ways, a superior fruit. “Mandarins are portable; they are bite-sized; and they taste better,” says Carter. 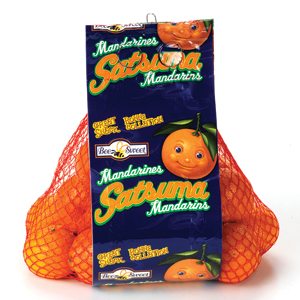 Experts predict that next year will witness another record in Mandarin sales for easy-peeler varieties. “We never sold as many Clementines and Mandarins as we did last summer,” says Fraser-Jones of AMC Direct. There is some difference of opinion over the extent to which this growth in Mandarins is at the expense of oranges or in addition to them.

“I think Mandarins are in addition to the other citrus,” says Cooseman’s Macek. “Years ago, we would bring in the Spanish Clementines. Now we have the domestic Halos and Cuties. We’re seeing a real drive toward great produce. The demand for everything in produce is increasing. There’s a great demand for Mandarins, especially if you can get a virtually seedless Mandarin with high sugar content. There will absolutely be more demand in 2016.”

“We have great eye-catching display bins, high-graphic boxes and bags that complement our bright oranges.”

Oranges may have slid to No. 2 in fresh market sales, but there are still ample opportunities for promotion. “We have great eye-catching display bins, high-graphic boxes and bags that complement our bright oranges,” says Tracy Jones, vice president of domestic sales at Booth Ranches, Orange Cove, CA. “Overall, the movement on Navels has been moderate. There is promotable volume week to week.”

Booth Ranches continues to find ample markets for Navel orange grown and shipped out of California’s Central Valley. Mandarins hail from China, still the world’s largest producer by far, and the growing Asian population in the U.S. is an important demographic. Some retailers find that Asians are their most important demographic when it comes to Mandarins. “Asian consumers are our major customers on Mandarins,” says DeKalb’s Choung. “I think all generations like the Mandarins.” But at Dekalb, too, suitability as a kids’ lunch-box item is an important selling point for this sweet fruit. “There are no seeds, and they are sweeter than tangerines or Clementines. They make wonderful school snacks.”