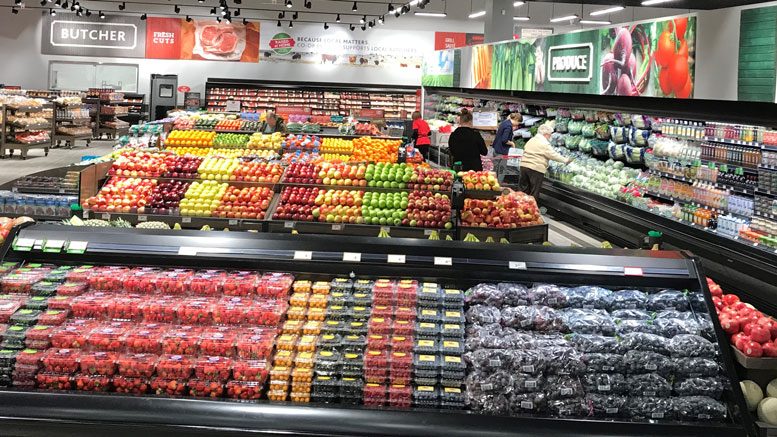 The Canadian government places a major emphasis on eating plenty of fresh fruits and vegetables, and Canadians are big fans, consuming 3.7 servings per day on average, according to a 2019 report from New York City-based Nielsen. To satisfy this demand, a well-oiled supply chain successfully sources and distributes produce near and far, despite operating in one of the world’s largest and coldest countries.

“As the population continues to grow, we see increases in almost every category; they just increase at different velocities,” comments Julian Sarraino, COO at Fresh Taste Canada, a major produce importer-distributor in Toronto.

In the past 12 months, apples and potatoes were the most popular fruit and vegetable eaten by Canadians, according to a 2020 study by Montreal-based Léger, provided by the Ontario Produce Marketing Association (OPMA), Toronto. Other top 10 favorites included strawberries, table grapes, blueberries, carrots, onions, and lettuce.

Canada alone is a large supplier, especially when it comes to apples, blueberries, cherries and strawberries, plus both greenhouse and root vegetables. But despite the industry’s impressive progress, Canada’s cold climate creates a short growing season for many items.

“Though Canada’s fruit and vegetable production continues to grow, the Canadian population’s demands for diversity and needs for quantity result in imports of fresh fruits and vegetables that heavily outweigh our exports,” states Ron Lemaire, president of the Canadian Produce Marketing Association (CPMA), Ottawa, ON.

In 2017, Canada imported C$9.787 billion worth of fruit, and exported $1.281 billion, generating a fruit trade balance of -$8.506 billion, according to Statistics Canada data, provided by CPMA. Canada’s vegetable production was larger, with exports amassing $1.823 billion and imports reaching $3.715 billion, creating a vegetable trade balance of -$1.891 billion.

“Canada is cold,” says Sarraino, Fresh Taste. “We rely heavily on imported product to fulfill consumption. Generally speaking, we rely on countries that are closest to us to mitigate the transit time, all in an effort to maintain the cool, crisp, fresh taste of produce.”

“Certain products are only available offshore during winter,” notes Fresh Start’s national buyer John Bishop, based in Milton, ON. “We procure all of our melons from the Caribbean, pineapples from Costa Rica and some items from Europe, such as peppers from Belgium or Holland in the winter. We’ve imported apples from Italy and New Zealand, carrots from Israel and, of course, we source within Canada during summer.”

Fresh Start trucks most produce into Canada either direct from the source or via the U.S. ports of Wilmington and Miami. When necessary, direct shipments of any commodity that cannot enter the U.S. without USDA inspection enter Canada’s ports of Vancouver and Montreal. This is based on the pest risk analysis at the time, such as with some citrus.

FCL estimates that 75% of its sales volume comes from products sourced outside Canada. “We import year-round from across the globe,” explains Lewis. “Our biggest source would be the U.S., but we move offshore seasonally for melons, berries, grapes, citrus and other commodities — the same as U.S. retailers.”

FCL buys direct from most Canadian and U.S. growers and uses third parties to facilitate offshore programs. Many of the larger retail/wholesalers, such as Loblaws and Metro, directly source some offshore products themselves.

“Canada’s fruit and vegetable growers play an integral role in fulfilling consumer demand,” says Sarraino at Fresh Taste. “Local product is as fresh as you can get. Fresh Taste takes great pride in working with our local grower partners.”

“This production is not only significant to be able to feed our country but also contributes to the health and well-being of Canadians, supports 249,000 jobs for Canadians and boosts our economy,” comments CPMA’s Lemaire.

“Ontario greenhouses account for two-thirds of Canada’s greenhouse production, or approximately 3,200 acres in total,” says Joseph Sbrocchi, OGVG’s general manager. “Our produce is grown in a controlled environment, and it is not as susceptible to weather, temperature or seasonality as is the case with traditional growing methods in field production. For this reason, Ontario greenhouse produce is available almost all year.”

During winter, most buyers supplement this supply with imported greenhouse vegetables from Canadian-owned operations in Mexico. But Bishop from Fresh Start notices this is changing. “The advent of LED lighting and other technologies is allowing Canadian greenhouse growers to grow year-round,” he explains.

Distance, time and weather mean Canada encounters [different] additional logistical challenges than the U.S. “One disadvantage is the distance from the source and the effort in place to get the freshest produce to our customers,” explains FCL’s Lewis. “Also, there are border delay issues that Americans don’t have as they ship [largely] within their borders.”

It takes five days to truck produce to Western Canada from California, according to Lewis. Produce from Mexico is trucked in, too, while Chilean fruit arrives by ship, sometimes spending three weeks in temperature-controlled containers.

Once in Canada, however, produce can still travel long distances before reaching supermarket shelves. In the extreme case, FCL trucks produce long distance over a period of 72 hours in outside temperatures of -45 degrees Celsius. “We have four distribution centers across Western Canada, with some stores 30 minutes away. Other retailers are three days away, which is a long time [for produce to be] on trucks,” Lewis says.

Canada’s aging trucking population is another challenge that impacts availability and costs. “We try to get the number of trucks we need each week under contract but, of course, everyone else does that, too, which causes the cost to go up,” Lewis notes.

Bishop from Fresh Start believes trucking has become unattractive as a career for Canadians. “It’s almost become a stepping stone toward something else just to make money,” he suggests. “People only want to do a single-day haul as opposed to 24 hours non-stop to California with another driver. It’s hard to find people but we’ve not run into a major issue.”

Logistics availability and costs are a growing concern, laments Lewis. “We’re fortunate to not have seen huge growth in FOB costs. But additional freight, exchange rates and, to a small degree on fresh produce, tariffs have certainly driven up costs and put pressure on margins,” he says.

CPMA considers the fluctuating value of the Canadian dollar as a constant issue, particularly regarding U.S. imports “Agreements can be made at a specific price, [but] by the time the produce is delivered, exchange rates could have changed drastically,” Lemaire explains.

Meanwhile, consumer buying trends in Canada are largely similar to the U.S. CPMA finds shoppers are “much more enlightened” about social and environmental issues, including food waste and plastic packaging. FCL says there is “great growth” in organics and increasing interest in ethical sourcing, while OGVG reports rising demand for produce snacks, like grape tomatoes and mini cucumbers.

Even so, buying decisions remain based primarily on price, plus CPMA research shows that shoppers place a high value on quality Canadian produce. “Retailers are increasingly looking to buy direct from Canadian growers to establish more personal connections, get the right taste profile from their produce on a consistent basis and, in order to inform their customers about the growers, to build shoppers’ confidence in the retailer and products they’re selling,” explains CPMA’s Lemaire.

According to Fiona McLean, marketing manager for Del Fresco Produce, Kingsville, ON, local has become top of mind. “Local produce is a plus for Canadian consumers,” she explains. “The economic impact touches all levels of business in our local community.”

Defining ‘local’ in a country as vast as Canada is not straightforward, however, and there are many different interpretations. According to the Ottawa-based Canadian Food Inspection Agency (CFIA), ‘local’ is recognized as food produced in the province or territory in which it is sold, or food sold across provincial borders within 50km of the originating province or territory.