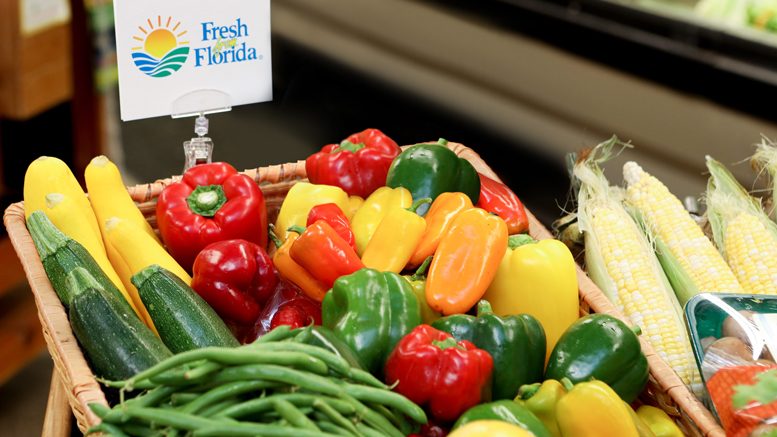 Canada and Mexico are not the only countries benefiting from the fresh exports promoted by state marketing arms.

The United States is recognized as the world’s third-largest country by area, presenting a considerable landmass for a fresh produce industry that extends far and wide. However, with a population unable to consume all domestic production, and a business renowned for quality, U.S. State Departments of Agriculture have extended their marketing efforts well beyond state borders; leading to substantial national and international success.

“It’s not merely important to look beyond our own borders; it’s actually vital because in Colorado we can only consume a small fraction of what we grow,” emphasizes John Addison, international marketing specialist at the Colorado Department of Agriculture (CDA), Broomfield, CO.

With sales totaling $7.49 billion, Colorado is one of the leading agricultural states in the U.S.; well known for potatoes, onions, Palisade peaches, Rocky Ford melons, Pueblo chilies, and Olathe sweet corn. Annually, Colorado exports around 25 percent of its agricultural products, worth $2 billion.

“On a national level, some of our top crops are sweet corn, potatoes, melons, and onions,” Addison explains. “Internationally, Colorado exports agricultural products to over 115 countries; our biggest exports are potatoes, dry beans, field corn, and onions. A relatively short shelf-life necessitates that most of our produce exports go to Mexico and Canada.”

“We are a global society, and it is important to be part of it,” stresses NCDA&CS marketing specialist, Kevin Hardison. “Good relations with Canada, Mexico, China and many more countries are very important to the success of international trade. Our sweet potato marketing has reached around the world, and provided North Carolina’s number one crop to over 20 countries.”

Although New Jersey, New York City and Philadelphia represent primary target markets, New England and Eastern Canada remain important, says Joe Atchison, NJDA’s Director of Marketing and Development. “New England and Canada are strong markets as our growers begin harvesting sooner than those areas can begin, and we can provide product until those markets have product in season,” he comments.

Green chili (or chile) is the principal vegetable marketed by the New Mexico Department of Agriculture (NMDA), Albuquerque, NM. “New Mexico is the top chile-producing state in the country,” explains Kristie Garcia, director of public affairs. “Most of our green chile marketing efforts are focused on the U.S. There is high demand all over.”

The Texas Department of Agriculture (TDA), Austin, TX, targets multiple international markets, as well as statewide and national retailers, restaurants and farmers’ markets. “TDA has been on every continent, except for Antarctica, creating and opening new markets,” reveals Agriculture Commissioner Sid Miller. “TDA continues to market Texas products from Asia to Africa, Europe to Australia, and South America to the Middle East.”

Increasingly, state-branded programs have proven successful as overarching campaigns for all agricultural products, including produce.

“We advertise heavily in Florida as well as up the east coast and east of the Mississippi, where our commodities are shipped and consumed,” explains Mindy Lee, bureau chief for ‘Fresh From Florida’, FDACS’s marketing arm. “We work with over 70 retail partners in over 25 countries. Canada is our number one export partner.” The Caribbean, Mexico, Central and South America also receive Floridian produce.

South Carolina produce is reaching further too, although the state and neighboring states dominate foodservice, retail and wholesale demand. “For peaches, the Northeastern U.S. is a strong market,” reports Eva Moore, communications director at the South Carolina Department of Agriculture (SCDA), Columbia, SC. “For some traditional Southern produce – collard greens, for example – we have an even broader geographic reach simply because those items aren’t grown widely. Our greens find a good market in the Midwest.”

Globally, SCDA works with the Southern United States Trade Association (SUSTA), which has achieved some market development. “Our peaches and watermelons have seen interest from Canadian buyers in recent years,” Moore notes.

State Agriculture Departments implement numerous strategies to raise produce sales, often through centralized divisions for retail, marketing and development. Increasingly, state-branded programs have proven successful as overarching campaigns for all agricultural products, including produce. The marketing ideas originate from various sources, although input is sought largely from growers and retailers.

Established in 1984, ‘Jersey Fresh’ is the oldest program in the U.S. Since then, it has served as the benchmark for other states, highlighting many of the hundreds of fruits and vegetables grown across the Garden State. The 2020 campaign began in April, and will target consumers and retail buyers through a diverse media mix during the growing season.

“We market on digital billboards on many high-traffic roadways around New Jersey,” details NJDA’s Atchison. “We have used banners on planes flying along the shore towns during the last two summers to reach the millions of visitors to our beaches. We run radio spots announcing seasonal crops, and we promote the benefits of New Jersey products in trade publications.”

In 1990, Florida legislature created the FAPC Program (‘Fresh From Florida’ logo program) to market Florida commodities under one umbrella. “The brand is known worldwide,” explains Lee. “The goal is to ensure the logo is used in traditional marketing campaigns, displayed on packaging, in-store advertising, and signage.”

‘Colorado Proud’ was created by the CDA in 1999 to promote food and agricultural products grown, raised or made in the state. The 2,800+ members comprise farmers, ranchers, food manufacturers, restaurants, retailers, and schools. A new logo marked last year’s 20th anniversary.

“There is no cost to participate, and members benefit by utilizing the logo on their packaging, in marketing materials, on websites, etc,” affirms Wendy White, CDA’s marketing specialist. “CDA promotes the logo to consumers through public relations efforts and television advertising. Based on available budget, we work with our PR partner to develop a theme and campaign strategy each year. We are working to expand messaging on social media, such as Facebook and Instagram.”

NMDA continues to expand its domestic marketing for green chilies through the ‘New Mexico – Taste the Tradition’ and ‘New Mexico – Grown with Tradition’ programs. Initiated in 2000 to drive product awareness and consumer loyalty, activities include in-store and menu promotions, technical seminars, and culinary school events.

“NMDA has worked with new retail grocers in Texas, Idaho, and Utah, in addition to other previously developed markets throughout the U.S.,” comments Garcia. “Another growing component of the green chile promotion is university alumni events. Retailers capture sales via pre-orders from ex-pats (and their friends), and alumni groups have reliable sources for chile roasting events. Social media has allowed NMDA to promote scheduled chile roasting throughout the U.S.”

TDA uses all available resources to promote Texas around the world. “Almost everyone in the agriculture industry has the same goal of promoting agriculture to the best of their ability,” comments Commissioner Miller. “Anytime we can collaborate and make a positive impact, we will.”

TDA’s Certified Farmers’ Market, Certified Organics, Farm Fresh Friday and Farm to School initiatives all fall under the ‘GO TEXAN’ state agriculture program. “We include all of our fresh fruits and vegetables,” states Commissioner Miller, who says TDA constantly refreshes activities; from restaurant and retail promotions to social media.

TDA also works closely with commodity boards for nuts, grapes, other fruits and organics. “Not every commodity is the same, so, of course, each commodity has its own marketing plan,” Commissioner Miller notes.

Launched in 2006, the ‘Certified South Carolina’ program is SCDA’s foremost marketing initiative. A cooperative effort among farmers, processors, wholesalers and retailers, members gain access to materials and promotions that distinguish their products through social media, advertising, events and sponsorships.

SCDA collaborates with some key growers; sharing booths at conventions or purchasing joint advertising to promote produce such as peaches. Likewise, SCDA communicates directly with retailers. “We offer signage to retailers free of charge to promote ‘Certified South Carolina’, even distributing it ourselves to individual stores,” notes Moore. “We’ve seen success with our Bin Program, which offers retailers ‘Certified South Carolina’ bins in which they can feature certain produce.”

Additionally, SCDA works with the South Carolina Watermelon Board and the South Carolina Peanut Board to employ marketing specialists/executive directors for those commodities. SCDA has staff dedicated to peaches too. To help growers reach new markets, SCDA employs a GAP consultant who offers free consulting to growers looking to become GAP-certified or Harmonized GAP-certified.

Overwhelmingly, State Ag Departments conduct surveys to appraise their campaigns. SCDA questions growers and buyers regarding their satisfaction, established connections, and similar information. “The best metric we have, though, is the success of ‘Certified South Carolina’, with 80 percent brand recognition within the state, and strong anecdotal evidence of its reach even outside the state,” Moore observes.

Colorado consumers are surveyed annually to determine awareness of the ‘Colorado Proud’ logo, and willingness to purchase local, among other factors. More broadly, CDA measures results based on media generated.

Inbound and outbound trade missions form another integral aspect in the efforts of State Agriculture Departments.

All New Mexico’s trade activities are tracked by key performance metrics, including buyer contacts, new-to-market education, and export sales. “Given the engagement between retailers, restaurants, and consumers across the U.S., the green chile promotion continues to be the largest single promotion in the history of NMDA,” reveals Garcia. “The number of retailers across the country who sell New Mexico-grown chile has increased tremendously over the past several years.”

TDA tracks all expenditures to ensure Texas growers are getting the best ‘bang for their buck’. “More and more Texas products are being sold around the world – that’s a huge win for Texans,” comments Commissioner Miller.

FDACS conducts surveys throughout the year to gauge consumer awareness of the ‘Fresh From Florida’ brand. Close retail relationships mean sales data and results from in-store events are tracked too.

‘Fresh From Florida’ achieves a $22 return on investment for every $1 invested, according to Lee, while the marketing of Florida agricultural products generates farm cash receipts of over $7 billion. “In 2013, we began to focus heavily on our multi-media campaign, and our brand awareness has gone from 40 percent (2013) to 78 percent (current),” adds Lee. “We reach over 50 million consumers a year.”

Inbound and outbound trade missions form another integral aspect in the efforts of State Agriculture Departments to connect produce suppliers with domestic and foreign retailers and distributors.

TDA Commissioner Miller frequently travels outside of the U.S. promoting Texas products through international trade missions. “I started a Global Outreach Initiative, and with that Texas products can be seen at a national and international level,” he states. “TDA is currently working on market access, specifically concentrating on Vietnam, South Korea, China and Europe. Governor Cabeza de Vaca [of Tamaulipas, Mexico] and I have also formed a strong working relationship on agricultural and border-related issues.”

“Inbound and outbound missions present opportunities to meet foreign buyers at home and abroad,” notes Lee. “We also organize events in most major markets so that participants travel abroad to take part. These are imperative for matching ‘Fresh From Florida’ growers with potential international buyers.”

Through its partnership with the Western United States Agricultural Trade Association (WUSATA), NMDA has organized other trade missions with the European Union, Mexico and Central America, particularly for chilies and pecans.