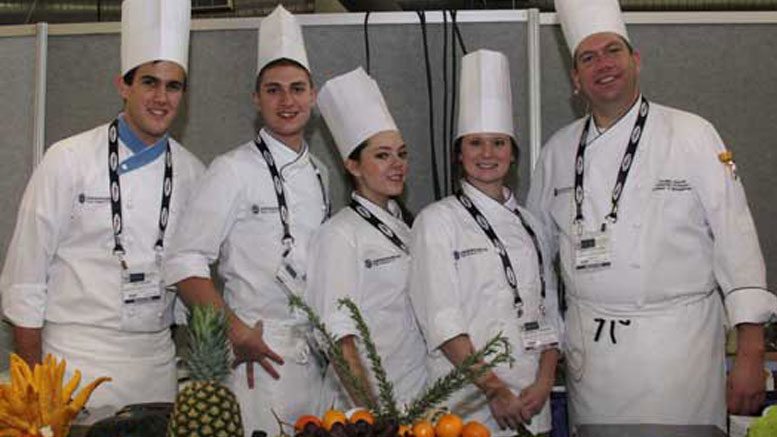 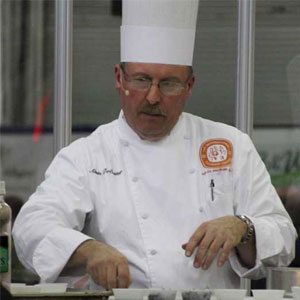 But those days are long gone, declares the lead chef-instructor at The International Culinary Center in New York City.

“Something like that would be unthinkable today,” De Coster says during a culinary demonstration at The New York Produce Show and Conference. “Consumers are demanding much more when it comes to produce, and chefs are eager to give them what they want. The quality of the produce coming out today is phenomenal, and a well-thought-out vegetable plate can really show a chef at the top of his game. If you have a combination of beautiful vegetables — an explosion of flavors — they can take you in a wonderful direction.”

This new, more sophisticated focus on vegetables and fruit was apparent everywhere at the three-day show in New York. Professional chefs and culinary educators demonstrated to attendees how far the treatment of produce has progressed in restaurants, from being almost an after-thought of menu development to sharing star billing with costly proteins.

“One thing about vegetables — we can sell them as a main course like that,” says chef-restaurateur David Burke, snapping his fingers.

Such culinary experts as Kerry Heffernan, Joe Quintana, Mark Weiss, Burke and De Coster, as well as instructors and students from Johnson & Wales University and Le Cordon Bleu College of Culinary Arts, carried this produce-centric message through the show.

The event, presented by the Eastern Produce Council and Produce Business magazine, showcased nonstop celebrity chef demonstrations throughout the second day at Pier 94 in Manhattan. At the same time, culinary instructors and their students roamed the show floor, foraging among participating exhibitors for fruits and vegetables they could transform into cutting-edge preparations at their Culinary Innovation Stations.

Rosa Mexicano’s recipe for guacamole calls for avocado, onions, jalapeño chilies, cilantro and tomatoes, prepared with a traditional molcajete y tejolete — or mortar and pestle — at each table.

Avocados are not the only high-volume produce item used by Rosa Mexicano, Quintana says. Each restaurant uses 40 pounds of tomatillos and 35 cases — weighing 15 to 20 pounds per case — of cilantro each week, both of which are included in its salsa verde.

“Produce plays a big role in menu development at Rosa Mexicano,” he says. “We try to bring something special to the flavors of Mexico.”

De Coster also prepared a pair of dishes showcasing a range of vegetable and fruit items during his demonstration. For his first dish, he combined both fruit and vegetables in an onion medley, baby spinach, seasonal mushroom and Lady Alice apple torte. The tourte incorporates a variety of onions (cippolini, red and white pearl onions and shallots) and mushrooms (oyster, chanterelles, button or shiitake).

For his second dish, he prepared a Pissaladière Monégasque, a pizza-like tarte from the south of France. The crust is topped with white onions, a fondue of tomatoes, baby arugula leaves, garlic, thyme, coriander, anchovies, and black pitted kalamata olives.

De Coster acknowledges the new wave of awareness surrounding produce. “There is an emerging movement to show just how good produce can be,” he says. “Chefs are more demanding when it comes to purchasing, and we’re seeing that in the farm-to-table trend. It’s all about taste.”

David Burke, executive chef and owner of the New York-based David Burke Group — which includes David Burke Townhouse, David Burke Fishtail and David Burke Kitchen — acknowledges that professional “chefs are no longer treating vegetables as secondary citizens. Now you’ve even got stars, like the ’magical vegetable’ kale. Isn’t it amazing how something can be around for decades and then it becomes a star?”

Burke demonstrated the versatility of the “magical vegetable” when he prepared a vegetable torte with charred kale and kale-whipped potatoes that also includes roasted cauliflower florets, zucchini, yellow squash, red peppers and eggplant. “Tortes can be a rich, hearty vegetable dish,” he says.

The veteran chef says he expects to see fruits and vegetables elbow their way further into the spotlight in restaurants, which also is likely to result in smaller portions of meat and fish. “Even at steakhouses we’re seeing clever side dishes with produce,” he says. “And it’s economical for us. Vegetables can weave in and out of any menu.”

Growers are helping to drive these new trends in produce usage, he adds. “Growers have listened to chefs — we’re getting better vegetables. Today, we can get 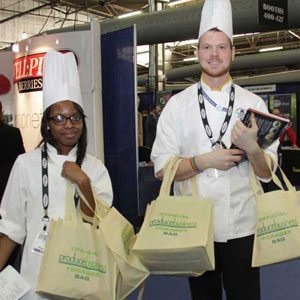 whatever we want from suppliers. For example, when it comes to herbs, everything in the world is at your fingertips.”

Featuring the freshest ingredients also has become something of a mission for many chefs. Restaurant customers, he says, “are even used to seeing root vegetables like carrots and turnips served with the tops still on, which is an indication of freshness that translates to [the dish] being more nutritious.”

Heffernan also discussed how certain vegetables, such as kale, have emerged as culinary stars and how this trend is expected to continue and grow. Citing potential candidates for future menu stardom, Heffernan points out, “Leeks are wonderful and don’t get enough attention. Rutabaga is the unheralded star of the winter produce spectrum, and salsify also bears a lot of interest. Dill is due to make a comeback, too.”

Mark Weiss, a professionally trained culinarian who bills himself as the “DJ Chef” and accompanies his cooking demonstrations with music, demonstrated the preparation of several dishes, including sautéed shrimp flavored with garlic, jalapeño peppers and red wine, served in scarlet butter lettuce rose cups.

Like many of his other professional colleagues, Weiss cites the widespread farm-to-table movement as being an important trend that is helping to shape menu development. “Produce is all about fresh and flavor now,” he says. “People are so conscious of what they’re eating these days.”

Weiss also predicts that scratch-made preparations and gluten-free dishes will continue to take on added importance in the foodservice industry.

Meanwhile, as chefs demonstrated the importance and versatility of fruits and vegetables in the menu development process, culinary school educators and their students fanned out across the exhibition floor with the mission of bringing back a cornucopia of interesting produce that would enable them to prepare cutting-edge dishes at their Culinary Innovation Stations.

Douglas Stuchel, assistant professor at the Hospitality College of Johnson & Wales University, Providence, RI, says his school’s four participating students were sent out with foraging bags to gather ingredients early in the day, after which they returned to the station to prepare anywhere from 20 to 30 different dishes. Every recipe had to serve 50 portions.

“We had about an hour or so to forage, and then we cooked for seven hours,” he says, comparing it to a “mystery basket” competition.

Fourth-year pastry program student Michelle Johnson said the students were nervous at first but got used to the action of foraging quickly. “It was exciting,” she says. “We had some ideas before we went in and then started foraging.” She says the group gathered “a lot of mushrooms, onions, potatoes, avocados and tons of herbs.”

Among the team’s dishes was a savory fruit salad containing fresh fruit with pine nuts and fresh herbs like thyme, rosemary and chives. “People are more willing to experiment with sweet and savory flavors,” Stuchel observes.

John Abels, lead instructor at Le Cordon Bleu College of Culinary Arts, Chicago, IL, also led a team of four culinary students participating in one of the two Culinary Innovation Stations at Pier 94. He said his students visited about 15 exhibitors who had agreed to take part in the event, from which they brought back such items as potatoes, kale, baby fennel, fingerling potatoes, and finger limes. Jefferey Brown, one of the students, says the group foraged for more than an hour before returning to their station to begin preparing the dishes.

Among the preparations was an apple crisp, made with Lady Alice apples, dusted with salted caramel powder (made by creating a buttery, salted caramel toffee and blending it in a food processor with tapioca Maltodextrin, a food-grade chemical that converts fat to powder). The group also prepared a beet salad with candied walnuts.

Commenting on the show, Abels calls it “a tremendous learning experience for our students. It taught them several new skills — for instance, communicating with vendors, identifying quality produce, sourcing new products and thinking critically on their feet.

“I am always impressed at the magnitude of this segment of the industry,” he adds. “This is the third year I’ve been here, and there is more produce every year.”