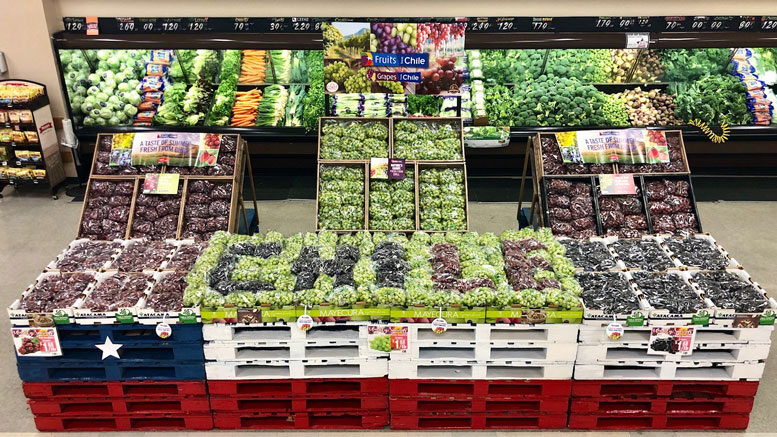 New transportation arrangements, like the ‘Blueberry Express,’ are expected to correct logistics logjams.

Once again, Chilean fruit is arriving, enabling consumers to enjoy the taste of summer through the winter months. And Chilean fruit marketers provide retailers with a plethora of ideas to merchandise Chilean fruit.

Fernando Soberanes, division manager of the Long Beach, CA, Giumarra Cos. Inc. office, says when it comes to merchandising, Giumarra works with retail customers “on a tailored approach to meet the retailer’s goals and accommodate any in-store display policies. We offer customized signage and additional materials to support their merchandising goals.”

As branded produce continues to dominate the produce snacking category, Kelsey Van Lissum, marketing communications manager at The Oppenheimer Group, Vancouver, BC, says Oppy represents Chilean fruit in one of the most recognizable produce brands: Ocean Spray. “Ocean Spray branded produce is perceived as high quality and stands out from the others on the shelf,” she adds.

“We also love the materials created by the Chilean Fresh Fruit Association, which help shoppers recognize the freshness of this fruit in season.”

Van Lissum says country of origin is “an excellent tool to use in the retail space. Considering Chile’s wide variety of microclimates, there is much to offer from this diverse country.”

Jim Roberts, president of sales for Naturipe Farms in Salinas, CA, says some retailers may promote Chilean fruit as its own category, however, “all of Naturipe’s retailers are just as excited as we are to offer customers new proprietary varieties that are being planted in all of our production regions — including Chile.”

AVOCADOS A SLICE OF CHILE

Joe Dugo, director of business development, Naturipe Avocado Farms, says Chilean avocados have an “excellent flavor profile and complement retail and foodservice programs in the U.S. market. In recent seasons, the Chilean avocado volume for the U.S. has been somewhat limited due to weather-related issues, so the Naturipe team is dedicated to planning well in advance for Chilean avocado opportunities with our valued customers.”

Most of their avocados are sold in bulk or individually, “so we just use Naturipe PLUs on this fruit.” The category has seen its strongest growth with bagged offerings, he adds. “We can also add consumer education material on these bags to include recipes and nutritional facts.”

With avocados, price is driven by supply and demand, like most other fresh produce items, Dugo explains. “Pricing is dictated by the overall supply of fruit in the marketplace at any given time. Chilean fruit will be on par with the pricing of the other origins in the marketplace, as its quality is second to none.”

As to Chilean grapes, Mark Greenberg, president of Capespan North America Inc., based in Montreal, Canada, credits Chile with continuing its transition from “traditional varieties to new propriety varieties, such as from IFG and Sun World. That is a good thing. I expect good fruit. I hope the season is better and has fewer logistics tie-ups and challenges.”

Greenberg notes the Chileans had a difficult 2021-22 season, which will impact the volume produced for all markets this season. “But I’m optimistic they will do a good job.” (For detailed grape merchandising tips, visit producebusiness.com.)

Retailers promote Chilean blueberries during their window of production, which is typically December to March, according to Naturipe’s Roberts. “We also recommend that retailers spotlight all the benefits of blueberries — they’re packed full of antioxidants, they’re high in manganese, and they’re a great source of fiber.”

Naturipe’s stance is that in-store promotion strategies ultimately are for the retailers to decide. But, he adds, “We find that the bright, vibrant berries naturally remind customers of the tastes of summertime. Promoting the berries showcases that our berries are always grown fresh and in season, thanks to our wide variety of production regions.”

Country of origin information is shared on Naturipe packaging.

The Chilean Blueberry Committee indicated, in its first seasonal forecast Oct. 17, that Chilean fresh blueberries will have an estimated volume of 98,228 tons for the 2022-2023 season. Small shipments to the U.S. market were underway in mid-October and expected to continue through February.

This estimated volume is an 8% decline from last year. “This has resulted primarily from the Chilean blueberry industry’s intense focus on providing only the best quality blueberries to its export markets,” according to the published forecast. “The industry is undergoing extensive variety renewal, with some varieties being shifted into frozen exports and other industrial uses. At the same time, growers are planting new varieties with better post-harvest conditions that will allow the fruit to arrive with the full flavor and sweetness characteristic of Chilean blueberries.”

With peak arrivals expected around the last week of December or first week of January, the blueberry committee’s U.S. marketing team “is working with retail chains large and small to design programs that will drive Chilean blueberry sales. Trade promotions will commence by early January and continue through February.”

Conversely, Naturipe’s Roberts indicates volumes have been trending down from Chile for conventional blues, but “we’ll see another strong year of growth on our organic blueberry program, allowing for organic ad promotions. We usually see high demand for both organic and conventional blueberries at this time of year.”

“At the beginning of this (Chilean) season, which will be in late November or early December, we will ship our premium label, Celestial,” Beckett explains. “We offer jumbo and organic blueberries under the Celestial label.”

Giddings’ Chilean berry exports will arrive in the U.S. until the end of February. Some of the Celestial brand is air freighted to select customers.

It is common for conversations regarding Chilean fruit to swing north toward Peru.

Soberanes of Giumarra delicately notes that “Chile has had a long history of exporting fresh produce to the U.S., but we have also seen other South American countries recently paying more attention to the U.S. market.”

Roberts said Naturipe’s Peruvian and Chilean operations complement each other. “An increase in Peruvian production has caused us to rely less on high Chilean volumes. However, Chile is still a very important area for organic blueberries because they fill the gap in supply between when Peru finishes production and before Florida, California and Mexico start production.”

In October, the USDA announced a potential phytosanitary rule change that, if it survives the public comment period which ends in December, may help Chilean growers compete with Peruvian grapes.

Several leading Chilean production areas have required fumigation for grapes. This harms the fruit shelf life and slows entry to market. Peruvian growers do not face that hurdle. But with new rules, many Chilean growers will be freed of fumigation problems.

Because of the similarity of the Peruvian and Chilean deals, over the last two shipping seasons, overlaps created port delays in the U.S. Late in 2021, it was double trouble, as Peru’s fruit harvest ran late. At the same time, U.S. ports on the West Coast were jammed. So, Peruvian shippers shipped greater-than-expected fruit volumes to Delaware River seaports, while relying on often unreliable schedules from container ships. Fumigators were clobbered with huge, surprise volumes, and February and March were a mess in Philly.

As a result, the Chilean industry quickly moved for improvements for the 2022-23 season.

The Blueberry Express service, which will be available to the entire industry, includes charter ships, in which a percentage of the cargo will go in refrigerated warehouses, as has been the case for years with other commodities, such as table grapes. It guarantees the maintenance of the cold chain, which is crucial for protecting fruit quality.

Beckett said Giddings is shipping to Philadelphia this year aboard the Blueberry Express. The speedy logistics will be a relief as the ships will be on time and cooperative. “When they’re three weeks late, you panic,” she notes.

Roberts of Naturipe says with the increased production from Peru on both conventional and organic blueberries, “nearly all of the blueberries we ship from Chile will be ocean containers, which is why we are so excited to have the Blueberry Express service.”

However, Capespan’s Greenberg notes, “People transitioned years ago from break bulk to containers because containers were cheaper. Recently, containers became very expensive, and the economics of break bulk changed. Until refrigerated container rates come back to earth, we prefer break bulk.”

From Naturipe, Roberts expects to see “significant improvements this year overall with the addition of the Blueberry Express service that we will be using on both the East and West Coast, which will get imported blueberries to the United States significantly quicker than ever before. This will have a positive impact on the shelf life and quality of the fruit. ”