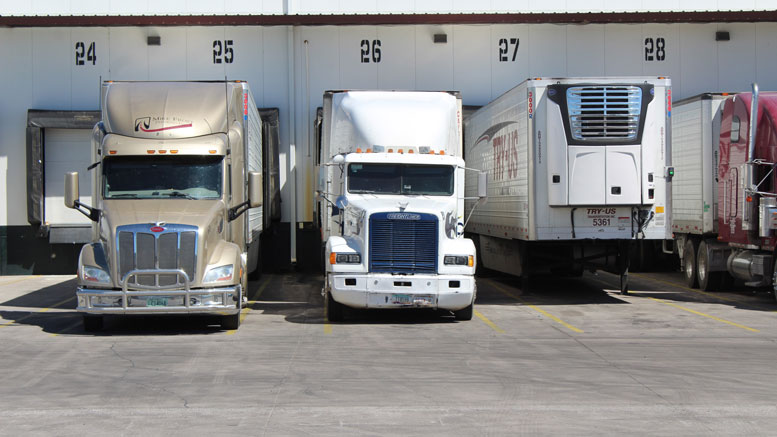 Increased trucking costs are the largest of the over-the-road transportation challenges. Depending on the route and week, one source says its transportation costs are up between 12% and 35% over a year ago.
ALL PHOTOS COURTESY TAD THOMPSON

Originally printed in the May 2022 issue of Produce Business.

Produce industry complexities are springing like leaks from an antiquated dam. And this year, for an industry trading products sourced from across the country and around the world, transportation costs are critically important.

“To say transportation has been ‘challenging’ would be an understatement,” says Bret Erickson, of J&D Produce Inc.

Erickson, who is the senior vice president of business affairs, says J&D will be shipping heavy vegetable volumes until mid-June. Nogales will continue shipping volume into the summer months and, in May, Georgia and Florida shippers will be going full strength and in great need of over-the-road transport.

After trucks became a little more available in the last half of April, rates skyrocketed with the approach of Mother’s Day, Erickson says.

Manfredi Logistics operates transportation services within, to, and from the Delaware River seaport’s massive cold freight infrastructure. Adam Lewis coordinates Manfredi’s involved puzzle, which involves third party cargo distributed from hundreds of thousands of square feet of refrigerated Manfredi Cold Storage warehouses, located in Kennett Square, PA, and southern New Jersey. These facilities are strategically placed to serve piers on either side of the river.

Lewis says driver availability is his top challenge, followed by fuel costs and delay windows. The cost of related equipment is another hurdle. Forklift costs have risen 35% in the last year. Labor rates are also skyrocketing.

The fuel discussion is simple, Lewis says. “It spiked very, very quickly. It went up significantly in the two months after the start of the Russian invasion of Ukraine. But the cost was rising before that. We’ve never seen it this high.”

To overcome the costs, “you have to talk to your customers about capturing the costs. You can’t swallow them. They have to be passed on to the customers.”

Miguel Usabiaga, president of Mr. Lucky, a major Guanajuato, Mexico, vegetable grower-packer-exporter, faces transportation challenges, not only in shipping from the firm’s Pharr, TX, warehouse to customers in the U.S. and Canada, but also from the firm’s packing facilities in Irapuato, Guanajuato, to Pharr. Usabiaga says shipping through Mexico “is pretty much the same as in the U.S., as far as issues with trucks, drivers and costs.”

Because Mr. Lucky operates a Texas distribution center, the firm has an advantage over Mexican companies that don’t operate that way, because the Pharr facility can hold an extra inventory in the event trucking delays impact deliveries.

Increased trucking costs are the largest of the trucking challenges, Usabiaga says. Depending on the route and week, Mr. Lucky’s transportation costs are up between 12% and 35% over a year ago.

Fuel expenses are a big part of this and a lack of availability “put a big pressure” on shipping Mr. Lucky vegetables. “The transportation companies can’t keep up with demand. They’re struggling with that, and, of course, finding drivers has been a big issue for the last three years.”

A particular transportation concern in Mexico is tied to crime. Truck theft is common enough for drivers stopping for breaks along Mexican routes that insurance companies have started to refuse ensuring the trucks per se. Usabiaga says insurance companies still sell coverages like liability, but so many trucks have disappeared while drivers were eating in roadside restaurants that insurers are now declining that risk. “They don’t want to insure the physical truck anymore.”

John Nakaoka, who is a business consultant for Mr. Lucky and the State of Guanajuato, noted Mexico is a net importer of oil and oil products, and, as to the cost of transportation and other inputs for Mexico’s produce industry, “we are concerned with what the rest of 2022 will bring.”

COSTS WILL COME DOWN, EVENTUALLY

John Vena Inc. is a Philadelphia-based specialty produce wholesale business, offering a wide variety of specialty produce items sourced by air and sea from around the world.Company president John Vena says his air and ocean transportation costs “are both up significantly,” which has triggered changes for the company. “Sea containers are so high, it effectively killed a couple of our deals from the last few years.”

This spring, Vena is faced with ocean container shipping costs that are triple and even quadruple what they were a year ago. “The costs have put some things way out of reach. For example, we had a good year last year with citrus from Israel. We received 25 containers from Israel. This year we took one container because our shipper got stuck. But he got abysmal returns because of the container costs.”

In 2021, shipping an ocean container from Israel to New York cost in the range of $4,000-$4,500, including some extra expense for cold treatment. But in 2022, the cost for transportation-only from Israel is $12,000. With 1,200 cartons per container, Israeli grapefruit arrived on American piers bearing a $10 transportation tag.

Also, for air freight, Vena says there are “big problems.” Foremost, airline cargo space has been a problem because for the last two years, there were not enough commercial flights. This not only jacked up air freight costs, but reduced belly space-placed produce in competition with computer parts and other goods that carry a much higher value per weight, moving produce down the priority list in the skies.

Vena says the ocean container rates will come down, but when is the big unknown. “They have to come down. If they’re too high, people will back away. Eventually, containers and ships will not be filled.”

But current events of the pandemic, political matters, and the Russian invasion of Ukraine will tend to keep prices up, Vena added. “It will be a while until the market forces bring them back to what they used to be. But the shipping community will do what it can to keep prices up. Now that they’re making money, it’s time to reinvest.” Some shipping lines are ordering new reefer containers and new, high-tech ships, which will add efficiency to global shipping going forward.

“Somebody needs to invest in infrastructure to handle this volume at the ports,” Vena adds.

Similar to ocean rates, Vena foresees air freight prices will come down, “but I don’t see it going back to the way it was in the past.” It is and will be helpful to have regular bookings with airlines, he adds..

Of course, John Vena, Inc. also is dependent on truck transportation for domestic receiving and distribution. For example, the company receives between two and four truckloads of Mexican avocados a week, via Texas.

“You just have to go with the flow,” notes the industry veteran.

Trucking Will Be Pressured Over the Long Haul