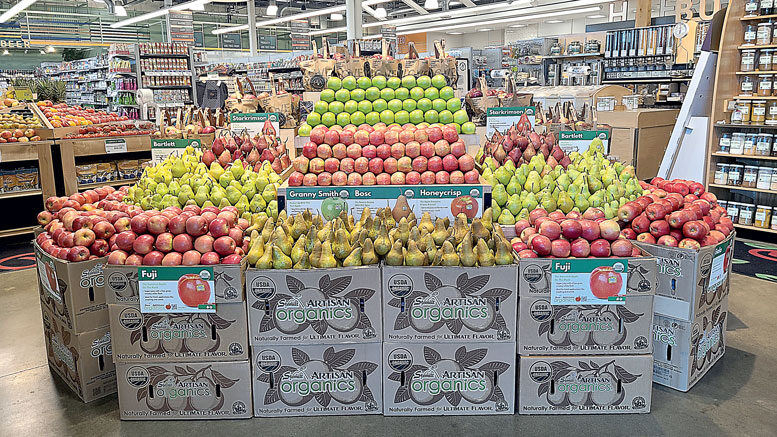 Individual retailer strategies for displaying organic apples vary, but bottom line is more consumers seem to be willing to pay a premium for a better apple. Just remember, core organic consumers are loyal, but you must give them something for the higher price they pay.
PHOTO COURTESY STEMILT GROWERS

Organics continue to hold a strong share of the apple category and inflation is not likely to take a bite out of these sales.

“Our organic penetration has been pretty steady, even with all of the inflation,” says Justin Rowe, category business manager for fruit at Tops Markets, Williamsville, NY. “I think the apple category is a bit of an outlier, seeing that more consumers seem to be willing to pay a premium for a better apple, whether that means an organic apple or a premium variety.”

Nearly one-sixth of the dollars spent on apples nationwide are for organic, and that figure is not going down.

“Organic apple volume was down nearly 5% compared to the previous year, but dollars were up 4%. This was likely due to a different supply of apple crop from one year to the next.”

There was a slight softening in demand for organic apples in the second quarter of 2022, according to Nielsen data compiled by Category Partners CEO Tom Barnes.

It was the fourth straight year that organic prices rose more slowly than conventional, as the premium continues to slowly narrow.

Core organic consumers are loyal, but you must give them something for the higher price they pay.

“Quality and flavor are essential with organic apples because of the premium that consumers are paying,” says Shales. “It’s important for retailers to deliver on that, so that they don’t lose their organic shopper or have them switch to another item because they haven’t enjoyed the experience.”

Stemilt is owned and operated by the Mathison family, which has grown apples in the Wenatchee area since the 19th century. Since 1989, the company has steadily increased its organic acreage of apples, pears and cherries.

Shales says bagged organic apple demand has grown since the onset of the COVID19 pandemic, an observation echoed by other shippers as well.

“There is much more demand in bags the last few years,” says Joel Hewitt, domestic sales organic manager at CMI Orchards, Wenatchee, WA. “We were starting to see this trend of increasing demand for bags before COVID, but it seemed to really take off during the pandemic. Whether that was a coincidence or not, the bag demand has certainly increased and is a big part of the category, especially on organic apples and pears.”

CMI Orchards is a leading producer of cherries, and organic and conventional apples and pears.
“We are seeing increased sales on Washington-grown organics across the country, which is competing for shelf space with locally grown conventional produce,” says Hewitt. “Washington State has an advantage on growing organics compared to other parts of the United States because of our accessible water, great soil and dry climate, along with all the other tools needed to grow good produce.”

The major decision for retail merchandising this healthy category is whether to display the organic apples with the conventional apples or in a separate organic section within produce.

The answer depends on the individual retailer’s customer base and overall strategy for building sales of organic produce.

At Tops, the strategy is to display the organic apples next to the conventional.

Consumers willing to pay a little more for organic may also be ready to spend a few more cents for a premium organic variety.

“We have an integrated approach to organics,” says Rowe. “All of our organic options are displayed near their conventional counterparts.”

One industry veteran believes that is the best strategy for attracting new consumers to organics, but not for serving an existing core of organic consumers.

“Dedicated organic consumers are going to the organic section,” says Myles Chasser, organic fruit buyer at Four Seasons Produce, Ephrata, PA. “If you are bringing new customers to organic, you want to intermingle them with conventional.”

Four Seasons Produce is a wholesale produce distributor, with an emphasis on organics, serving co-ops, independent markets and supermarket chains throughout the mid-Atlantic and Northeast.

A separate organic section may help avoid the confusion of calculating the price for apple varieties sold at two prices per pound.

“Many retailers are worried about incorrect rings at the register, which would be why they would separate them from each other,” says Hewitt. “And another reason why demand has increased on bags, especially for organics, so you can get the correct ring at the register.”

The advantage of intermingling is that customers might see a variety with only a slight premium for organic and decide to try them.

“It is exciting to see more and more demand for organic apples and pears year over year — a big reason why we have invested much of our market share with organic produce,” says Hewitt. “This is something that we are watching closely and how they are going to compete with local produce.”

Organic apples from the West compete with local apples in areas where organic production has not been developed.

“With us being in the heart of New York apple country, our consumers are quick to support the local growers,” says Rowe. “And since we cannot get organic apples out of NY, that means there is less of an emphasis on organic apples.”

Some retailers take a hybrid approach to maximize sales of both organic and conventional apples.

“It all depends on the retail strategy that they’ve adopted for organics,” says Stemilt’s Shales. “It seems that many retailers will offer an apple variety either organically or conventionally, or perhaps will offer both, but in different pack types or separate sections of the produce department if bulk fruit. There are a lot of “in-and-out” promotions for organics, which is a great tactic given there is still a seasonality factor with certain varieties. Organic apples are available year-round in many cases now and retailers want to offer supply every week of core varieties so that they can drive repeat sales with shoppers.”

Consumers willing to pay a little more for organic may also be ready to spend a few more cents for a premium variety.

“Organic Honeycrisp is the sales driver for the category, at 34% of all organic apple sales,” Shales says. “It’s followed by Gala, Fuji, Granny Smith and Pink Lady. I would expect Cosmic Crisp to rise this year with increased volume coming organically, and also other club varieties. It’s great for the consumer that more high-flavor apples are now available organically.”

Chasser from Four Seasons agrees. “Honeycrisp continues to top the charts for us,” he says.

“In our market, there doesn’t seem to be any preferred varieties when it comes to organic vs. conventional,” says Rowe. “I think people are just after a good-tasting apple.”

Some shippers that emphasize organics are working to offer a wide range of organic varieties.
“With more shelf space being allocated to organics, it’s very important for us to have a wide range of varieties to offer our partners, which is why we have many high-flavor organic varieties along with our core varieties,” says Hewitt. “This high flavor includes organic Ambrosia, Envy, Jazz, Kanzi, Kiku, Smitten, Cosmic Crisp and Rosalynn.”

But Hewitt agrees that appearance and taste ultimately drive sales.

“Organic apples have had an increasing following across the country, and even some export countries as well,” he says. “Some say the natural appearance is more attractive, along with organics having a more enhanced flavor.”

GET THEM WHILE YOU CAN

Apples will be a little smaller this year out of Washington, which could make it difficult to get enough pound of the organic to serve the growing market.

“We are seeing steady increases each year, however we project to have less supply this year because of the light set crop,” says Hewitt. “It will most likely be a challenging year filling orders on organic apples because of the decrease in supply this season along with increasing consumer demand year over year.”

One answer to this problem could be to accentuate the trend and sell even more of the organic apples in bags.

“We now see 60% of organic apple volumes sold in bags, and that has increased 2% in the last year,” says Shales. “Bulk is still very relevant and important for the category because it delivers a higher price per pound. This year’s Washington apple crop is anticipated to have smaller-sized fruit, which will make for more bag promotions and should line up well with what consumers are looking for.”