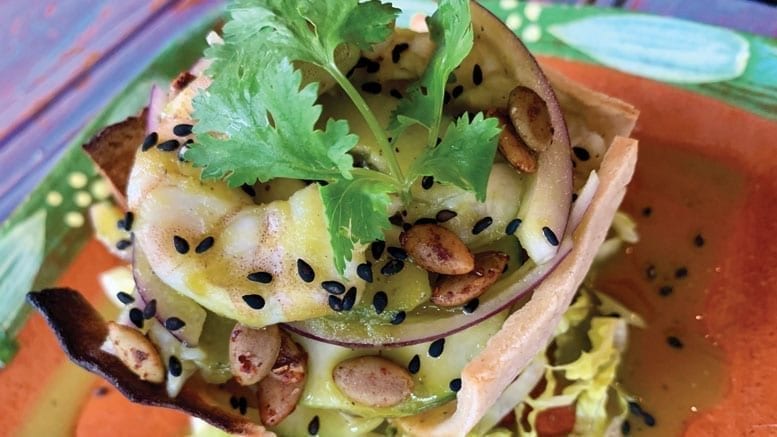 Opening Citrico in Prospect Heights, Brooklyn, during early 2014 was a chance for chef Luis Davila and his wife, restaurant manager Noor Alexandra Shikari, to plug a gap on the New York food scene for authentic Mexican food.

In doing so, the couple are demonstrating the cuisine’s fundamental use of fresh produce; from avocado, beets, grapefruit, pineapple and squash, to courgette flowers, epazote (aromatic herb), nopal (cactus), pepitas (pumpkin seeds) and squash blossom — some of which Shikari has to purchase herself from a local Mexican supermarket.

“Five years ago, Mexican food in New York was more Tex-Mex style,” explains Shikari. “It was seen as meat-heavy, greasy and fast. In reality, Mexican food is the opposite; it’s very heavy on the vegetable side, and it’s a very laborious cuisine as a lot is done by hand. For example, we roast the chillies, tomatillos or vegetables for the base of our salsas. This changes the flavors, and it’s very important for quality.”

Focusing on the southern and central Mexican dishes that Davila ate growing up in Tlaxcala (east of Mexico City), Citrico’s menu features bright, bold tastes, and recipes that pair authentic Mexican ingredients with different citrus flavors, hence the restaurant’s name. “Luis is attracted to that [citrus] acidic flavor profile, plus we wanted the food and the feel of the restaurant to be light,” notes Shikari. “He cooks everything from memory, or he calls his mom and five sisters back in Mexico.”

Examples include Citrico’s Ceviche, which pairs fish with grapefruit slices, instead of the traditional lemon; and the Citrico Salad, which combines spinach, orange, grapefruit, cherry tomatoes, dried apricots and spicy pepitas with a cranberry vinaigrette; or the dessert Carlota, a light Mexican citrus cake with homemade key-lime gelato. There’s even a citrus-infused chipotle chilli mayo.

Huauzontles en Salsa Rojo is perhaps the most unique vegetable-based dish on Citrico’s menu. It utilizes a pre-Hispanic dark green plant with small florets at the end of long, thin stems. “Huauzontle is related to quinoa and [the American edible weed] Lamb’s quarters,” explains Shikari. “I’ve never seen it on another menu in New York, but it’s eaten a lot in Mexico.”

Citrico also offers produce-inspired twists on classic Mexican dishes, such as guacamole topped with pomegranate. “In Mexico, Luis would find pomegranates growing along the roadside,” says Shikari. “It was like picking apples off a tree. Although it’s not a citrus fruit, when you dip a tortilla chip into the guacamole it gives a burst of acidity, which pairs so well with spicy, smoky flavors. We want people’s taste buds to jump off their tongues.”

Five years in, Shikari says Citrico is proud to have contributed to the improved Mexican food offering in the United States and wishes to expand the family business. “We want more Citricos, absolutely,” says Shikari. “I’d like to do something bigger, with more choice, but it would need to be in Brooklyn. We are very hands-on. We make our food from scratch, and we pride ourselves on consistency.”