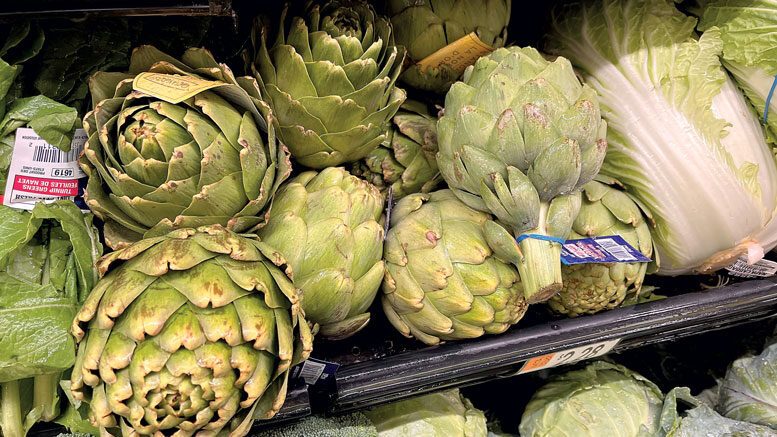 Getting consumers information that will make them comfortable preparing artichokes at home, rather than just enjoying artichokes when eating out, is critical to boosting sales.

Artichokes need a boost — including visibility, and education about how to prepare them — to maximize sales of a vegetable that people know, but that might not be in their cooking repertoire.

Scott Wiggans, produce director at Lazy Acres Natural Market, Santa Barbara, CA, sees opportunity in being active in merchandising and promoting artichokes, and positions artichokes in a “veg buy areas where we promote vegetables on sale.” He often displays lemons with the artichokes to pop the colors and create a cross-merchandising tie-in, but will regularly promote artichokes by themselves, sometimes in the lobby displays.

“Artichokes are an item we are usually able to beat our competition on sizing and quality. A few times a year, we run hot promotions and push them up front. Usually the best times to promote, for us, are Mother’s Day, Easter and during summer grilling campaigns. Usually in our summer artichoke promotions, we build displays with artichokes, eggplant and summer soft squashes. We promote them in the ad probably six times a year.”

Of course, Wiggans’ customer base, who are inclined toward produce consumption, are likely to have a broader interest in a wider range of fruits and vegetables than average.

Nate Bornbach, produce manager, Frank’s Piggly Wiggly, Elkhorn, WI, says his placement of artichokes is deliberate so people can find them in best form and conveniently. “We keep our artichokes under the misters on our wet rack next to the asparagus,” he says. “They seem to hold up best that way.”

But, he adds, advertising doesn’t generally drive sales for the stores he supervises.

SUPPLY WILL BE STEADY

Estimates of the crop vary slightly, and Judy Burditt, manager, California Artichoke Advisory Board (CAAB), Castroville, CA, anticipates this year’s crop size to look similar to last year. “For the past five years, our production has hovered around 3.5 million cartons or 77 million pounds.”

Caleb Randall, commodity manager, artichokes, at Ippolito Int’l., Salinas, CA, says the company expects supplies to be steady over the next few months, and the end of the year is typically prime for promotion. However, he notes that opportunities extend beyond the core promotional season.

“Historically, the fall season through spring has been the most popular time to promote,” he says. “But ’chokes are a great item to grill in the summer months and add a lot of flair to the picnic table. With the wonderful barbecue recipes that are now available, they can be promoted year-round.”

At D’Arrigo California, Salinas, CA, John Scherpinski, director of sales and marketing, says this year crop size is on the larger range, mainly 12s to 24s. “Overall quality has been strong all summer and expected to continue into the fall,” he adds. “We are working with slightly reduced yields this year, resulting in an overall reduction of availability.”

For Ocean Mist, Castroville, CA, the crop will be consistent with years past through year’s end and into 2023, says Rick Bravo, vice president of sales and marketing.

“The Castroville season will be drawing to a close in the weeks ahead, with production from Oxnard beginning in October, followed by Coachella and Mexico. We anticipate promotional volumes for the Thanksgiving holiday as well,” he says.

Most consumers are likely to be familiar with artichokes through experiences in foodservice and in processed form such as artichoke dips.

“Restaurants are a great place to experience this great vegetable, especially if consumers aren’t feeling particularly confident trying it themselves at home,” says Scherpinski.

However, in that case, getting consumers information that will make them comfortable preparing it themselves is critical.

“Education on preparation, as well as cooking advice, are certainly the biggest hurdles we face with this item,” Scherpinski says. “The younger generations have enjoyed artichokes before, but overall seem to lack the confidence to prepare on their own. In the past, they have possibly relied on preparation from parents or grandparents without that guidance being passed along.”

“While artichokes are currently grown year-round, our main harvest is spring, mid March to early June,” Burditt says. “Another marketing opportunity is during the winter frost, for frost-kissed artichokes.”

The CAAB has posted a basic merchandising plan for artichokes on its website, and recommends retailers set the stage by displaying artichokes with brightly colored vegetables such as beets, carrots, red and green peppers, eggplants and citrus. To make the most of variety, the board recommends produce departments identify and display each kind of artichoke as they might Fuji and Red Delicious apples. To top it off, the board suggests, add a refrigerated, end-of-aisle display.

CAAB sees basic preparation information about artichokes as important. The board even features simple instructions on its website for stuffed artichokes. As such, it provides upfront information for the uncertain consumer, an approach that could be helpful at retail as well. Then, providing additional recipes can help move product more consistently. The advisory board has those recipes on its site, too.

Conspicuous merchandising is important to generating artichoke sales, but consumers respond to diversity of display as well.

“Our most successful retail partners have large island displays of artichokes front and center in their produce departments,” Bravo says. “Purchase data also tells us that artichoke sales improve when shoppers have multiple SKU options to choose from. In fact, top-performing retailers have three artichoke SKUs.”

High visibility is critical for artichoke merchandising, but price can generate deeper purchases.

“’Chokes are an impulse buy and move best when displayed on the end of the aisles,” Ippolito’s Randall says. “Their unique appearance makes them one of the more interesting items in the produce section, so take advantage of that. Show-stopping quality and a sharp price are needed if you want the consumer to drop a few in their grocery cart.”

Although winter is a key promotional period, Sherpinski cautions that limiting promotional efforts to the depths of the chill season may not be the best way to showcase artichokes.

“Typically, the winter is best, although that product availability does not always coincide with the best quality,” he points out. “Generally the winter ’chokes are accompanied by some peel on the outer leaves due to the extreme cold mornings, which tend to create frost delays with harvest crews.”

Ocean Mist sources from multiple growing areas to provide quality product, but one particular region has a special significance.

“While Ocean Mist Farms artichokes are grown year-round, our Gold Standard Coachella harvest takes place in winter/early spring, and the harvest coming out of Castroville takes place in late spring/early summer,” Bravo says. “This is typically when we lean into our annual consumer promotion efforts. We also have a special artichoke variety that is typically ready for shipping in the early spring: purple artichokes. Ocean Mist Farms supports retail sales for the purple artichokes with a variety of marketing activations centered on the unique variety and short season.”

Bravo also sees the benefit in promoting artichokes in what may be considered off-peak seasons for shoppers, such as the fall. “Incorporating artichokes into fall dishes and providing recipes to do so is an easy way to bring artichokes top of mind during the time of year where this vegetable may not be front and center.”

Holidays are an important promotional opportunity for artichokes. CAAB says featuring artichokes for the Christmas, Hanukkah, Easter, the Fourth of July, Labor Day and other seasonal events can make the most of an opportunity, given colorful and clearly defined merchandising.

“Holidays are a great time to promote artichokes,” Randall agrees. “It’s a unique and fun item to have on the table, and they add a bit of sophistication to the table.”

As with many other commodities, cross-merchandising can help when promoting artichokes, but, in this case, a little imagination can make a difference between average and higher results.

“When possible, cross-merchandising is always a great idea, regardless of the commodity,” says Randall. “Dipping sauces and barbecue items would be good choices to promote with ’chokes. Obvious choices include mayonnaise for an easy Hollandaise sauce, however within the produce department, consider cross-promoting with lemons. Many artichoke dipping sauces include lemons, and keeping the two fresh items close together can inspire consumers to create fresh sauces from scratch.”

Bravo notes that data doesn’t identify any particular product that certainly raises artichoke sales volume, “but we do know the impact of cross-merchandising is generally beneficial. We recommend cross-merchandising artichokes at POS with complementary ingredients such as cheeses that pair well for an artichoke dip and lemons that are a common ingredient in steamed or grilled artichokes.”

In-store price promotions can coax consumers into including artichokes in their shopping trips, Bravo adds.

“Category data tells us to focus promotional activity around Thanksgiving and Christmas and the peak season timeframe April to June,” he says. “Online promotions have been very effective in broadening our brand reach and helping our artichoke education and nutritional messaging reach new shoppers. Our social promotions are a consistent means of reaching new shoppers and growing our community so that we have everyday access to provide meal inspiration and product messaging. We have found that recipes are the most requested content that we provide, and we are continually investing in our recipe library to ensure we have new, on-trend flavor profiles and convenience-based meal solutions to share with our shoppers.”

“Artichokes are still in a growth phase within the U.S.,” Randall says. “Regional demographics and the time of year would be important factors to consider where, when and how to promote.”