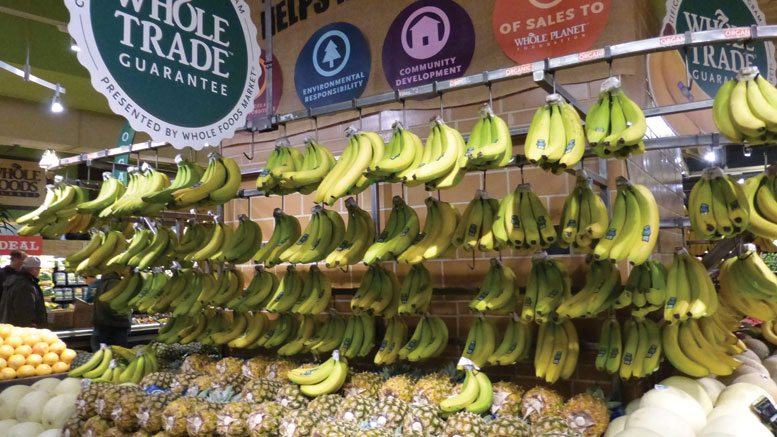 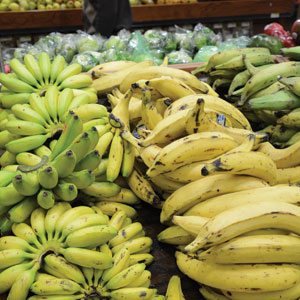 More than 90 percent of U.S. households buy bananas each week. Growers, wholesalers, marketers and retailers can all share the credit. The health benefits are well known by parents, and it doesn’t hurt that kids love them too.

Retailers do their part by showcasing bananas with front-end displays that draw customers into the department. Secondary displays in other departments, and at checkout, take advantage of the fruit’s tremendous grab-and-go appeal.

Produce executives familiar with their store’s demographics offer customers what they want, but some preferences are ubiquitous across the industry. “Retailers have more success selling bunches, ripened and unbagged fruit,” says Jack Howell, senior vice president of sales, Fyffes North America, based in Coral Gables, FL. Howell recommends single-layered displays with bananas falling in the four and five range on the ripening chart.

Dan Dvor, manager of A&N House of Produce in Philadelphia recognizes this preference too. “We see probably a 30 to 40 percent increase in sales when we can offer our customers a yellow banana,” says Dvor. “When it’s number four or five on the banana chart, that’s our sweet spot.”

“We have a strong lunch crowd,” says Moe Issa, owner of three Brooklyn Fare markets located in Brooklyn and Manhattan. “That crowd usually picks the ripe ones. We put them by the deli and people take them in the morning and bring them to work or have the banana for lunch.

Bil Goldfield, director, corporate communications, for Dole Fresh Fruit based in Westlake Village, CA, suggests some shoppers may prefer bananas of a greener color to cook with or let ripen at home. “Offering bananas in multiple stages of ripeness allow consumers to purchase vibrant yellow bananas for immediate use and at a greener stage for later use or for recipes that call for a starchier banana,” he says. “Other exotic banana varieties displayed nearby also offer opportunities for a wider audience.”

Mayra Velazquez de Leon, president and chief executive of Organics Unlimited, based in San Diego, advises selling the fruit unbagged. “Traditionally, bananas are sold in hands, not bags. Retailers are still most comfortable selling them this way in order to price the product by the pound,” she says.

Velazquez de Leon also sees the value in selling them individually. “There’s certainly a market for selling single bananas in a grab-and-go, convenience setting and a retailer can find success in the ability to charge per banana versus per pound.”

The variety of bananas consumers prefer is often determined by the composition of the population in the store’s trading area. Different ethnic groups consume bananas differently. Some cultures may prefer plantains to bananas. Velazquez de Leon points out the majority of U.S. households purchase bananas on a weekly basis, regardless of ethnicity, but retailers can still drill down to find more specific demographics. Her suggestions include: “Parents looking for nutritious foods for their children; Millennials who prefer fresh, quality produce; and health-conscious individuals who understand the nutritional value of bananas.”

Christou recommends a focus on ethnic cuisines. He says retailers should do this by developing targeted promotional and merchandising items to educate consumers on the uses and nutritional information of the variety.

“This includes, among others, development of eye-catching POS for displays, in-store demos, and on-pack information about the alternative uses for the product.” Recipe cards suggesting the different uses of the banana variety will appeal to adventurous home cooks of any ethnic group.

“In general, we found consumers developed more sophisticated tastes, and as trends in healthy eating and interest in new ethnic foods continue to grow, the need to market exotic and specialty bananas increases as well,” says Christou.

Sales of specialty bananas, organics in particular, are growing. “In comparison to 2015, sales and volume of organic bananas increased by 30.4 percent and 32.2 percent respectively,” says Marion Tabard, director of marketing, Fyffes North America. This makes bananas one of the strongest growing organic purchases. “Retailers are doing their part as well and developed initiatives to grow the organic category to meet their customer needs.” 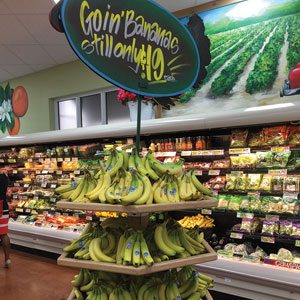 The ongoing movement in the U.S. toward healthier food choices fuels the organic trend. Changing demographics and an increase in the number of Hispanic and Latino households leads to higher sales of specialty bananas, such as plantains. “There’s an increased trend of buying more plantains than previously,” says Velazquez de Leon. “U.S. consumers are becoming more adept at using this traditionally overlooked fruit.”

Exotic banana varieties are also getting a boost thanks to the interest of “foodies” looking to experiment with new ingredients and flavors. “The increase in consumer interest for other exotic banana varieties is largely the result of the macro trend of consumers being exposed to new or seasonal ingredients either at farmers markets or in restaurants,” explains Dole’s Goldfield. This interest extends to the sampling of new tropical fruits as well.

“As these specialty fruits and varieties become more mainstream, we are starting to fold them into our consumer-facing and retailer programs in the form of web content, public relations outreach, consumer and retailer collateral,” he says.

Dvor at A&N House of Produce has seen movement with specialty varieties as well. “We started selling babies [mini bananas] a year and a half ago, and we had good response to that, also the plantains, the yellow and the green. We tried one box of reds and that got a lot of oohs and aahs.”

Justin Heffernan, vice president of sales, retail for Fyffes North America suggests the optimal space for bananas is “12 to 20 linear feet in a prominent location within the produce department depending on store volume.”

He also notes an increase in the variety of other commodities competing for space with bananas. “The number of varieties of apples exploded over the years, and items like Clementines are available practically year-round. Furthermore, if bananas are part of a full tropical display, chances are they have lost space to growing commodities like mangos and pineapples. The space has to come from somewhere.”

Howell at Fyffes North America recommends displaying only the amount of bananas that will turn in seven hours or less. “Retailers should have produce employees consistently replenishing the display so it always looks full and fresh.” He also recommends bananas be displayed in single layers to avoid bruising.

Bruising is bad for bananas being sold as a handfruit, but that doesn’t mean it’s the end of the line. Cost-conscious retailers can get creative to eliminate shrink. “Bananas are one thing where there’s not much waste,” say Issa at Brooklyn Fare. “We make smoothies and use some of them in our pastry shop for muffins and cakes, so we do recycle them. We move them very fast.”

A&N House of Produce has a way of dealing with bananas that look past their prime. “We have a designated area, we call it a dollar shelf, where all of our cosmetically challenged fruits and vegetables go,” says Dvor.

“We never put something that is internally rotten, but sometimes when it’s overripe, or has a little nick and has no food safety issues, that’s the prime target for our dollar shelf. It’s not as appealing, but for people willing to do a little extra work, it’s a real money saver.”

While attractive, bountiful displays of unblemished bananas grab attention, displays also get a boost from creative cross-merchandising. “Utilizing strong displays and cross-merchandising techniques can be helpful in promoting bananas,” says Velazquez de Leon. “Displaying bananas with other tropical fruits, at the end of the cereal aisle or at the checkout areas for grab-and-go convenience, can boost banana sales.”

Bananas’ popularity, especially with kids, provides retailers a great opportunity to boost the sales of other commodities. “Different cross-merchandising strategies for parents include pairing bananas with healthy products such as strawberries, other tropical fruit, cereal, etc. Smoothies are also becoming a big part of healthy lifestyles and bananas make a delicious ingredient for energy packed, kid-friendly smoothies,” says Christou at Del Monte.

The pricing of bananas certainly helps the fruit retain its appeal. “The stable pricing is maintained, because bananas are a year-round product that is grown in many climates around the world,” says Velazquez de Leon. “There is no high and low season that creates price fluctuation. High-quality bananas are in constant supply and are always imported from a tropical area.”

While the retailer ultimately sets prices, bananas remain consistently inexpensive with a lot of bang for the buck. “When one considers the nutritional value, convenience, and investment required to bring this product to the retail shelf, it’s easy to see that, at the current price levels, consumers are getting incredible value for their money,” says Christou.

Michigan: Product Diversity Hits the Mark in the Midwest

Root Revival: Veggies Back In Vogue

Grow Root Vegetable Sales From The Ground Up