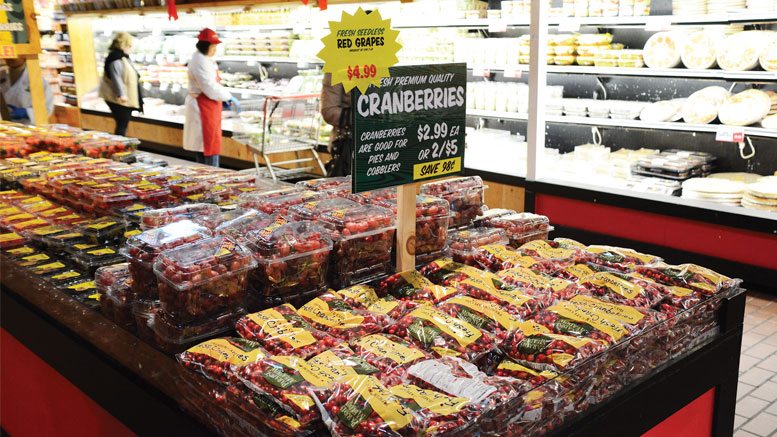 Promoting the healthy snack in myriad forms within the produce department. 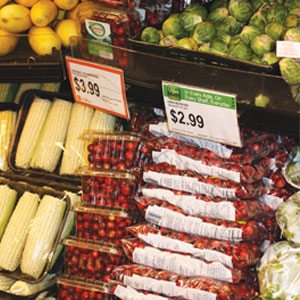 Before you know it, Thanksgiving will be here. It’s the holiday of parades, appreciation, and food! There is a variety of traditional staples that make up the Thanksgiving table: turkey, stuffing, mashed potatoes, and pumpkin pie. And let’s not forget the ever-popular cranberry sauce. Of course, the brightly colored food starts with cranberries.

The harvest season for fresh cranberries began in late September. By the beginning of October, one can find fresh cranberries on grocer’s shelves where they will stay until early December. Ben Johnson is the president and founder of Portland, OR-based Bridges Organic Produce, a company that specializes in organics. The company works with cranberry growers and acts as an importer. “We’re trying to
expand beyond Thanksgiving cranberry sauce. We promote for other recipes and cocktails,” says Johnson.

The goal of expanding beyond the traditional cranberry season is a common one. However, marketing cranberries starts with an emphasis on the health benefits. The cranberry is well known for its role in helping prevent urinary tract infections, but it has other positive effects upon health.

Bob Wilson, the managing director and co-owner of the Wisconsin Rapids, WI-based Cranberry Network, which serves as the marketing arm of Tomah, WI-based Habelman Brothers Cranberries, is a big advocate of the health benefits of cranberries. Wilson notes that a clinical trial began in September of this year, which studies cranberries impact on gut health.

“Gut health is a vital part of the body as research tells us 90 percent of the body is affected by activity in the gut,” says Wilson. He also says recent research shows cranberry consumption creates a positive impact upon gut health, and a study in 2015 reports regular ingestion of cranberry helps with blood flow. Cranberries also act as a flushing mechanism that prevents bacteria from adhering and does not adversely affect good bacteria in the body.

Shindelbower says Sugar Foods markets cranberries as part of a salad topping. The company offers dried cranberries individually as well as mixed with other dried fruits and nuts. “The cranberries offer flavor and texture and make any salad delicious.”

Many people, according to Shindelbower, use the product to recreate salads that they ordered in restaurants. In addition to the added taste, the cranberry topping also adds a vibrant red color to the salad. “People want to incorporate healthier choices, and our product helps them enjoy their meal and makes them want salad as a more regular part of a meal plan,” says Shindelbower, who adds cranberries are best merchandised in the produce department, because consumers can pick up all their salad ingredients in the same area.

Kristine Esdale is the director of marketing for West Wareham, MA-based Bluewater Farms, a company that represents the vision and harvest of the Canning family, who has been growing cranberries in Cape Cod, MA for three generations. Besides selling both fresh and dried cranberries, Bluewater Farms also makes cranberry juice, as well as mixes with other fruits. She encourages retail outlets to place the juices in the produce department as a way of emphasizing health benefits.

“We highlight the health benefits and taste, and we appeal to educated consumers who are reading labels and are conscientious about what they are putting into their bodies,” says Esdale. Bluewater Farms uses both the wet pick and dry pick to harvest cranberries. “The dry pick allows the cranberry to stay on the vine longer and soak up more nutrients,” says Esdale.

“Because cranberries are identified as a superfruit, customers are more educated about them, which has made our road easier,” says Esdale. Now, Bluewater Farms is focusing on positioning cranberries as not just for the traditional Thanksgiving cranberry sauce.

“Some of the most successful merchandising comes from retailers understanding how people use fresh cranberries,” says Kellyanne Dignan, senior manager, corporate communications for Middleboro, MA-based Ocean Spray Cranberries. “Over 50 percent of consumers use fresh for desserts, so retailers should activate adjacencies with holiday dessert items in store. Over 70 percent use cranberries for sauce in their holiday meal so tie ins and merchandising along with turkey, fresh potatoes, carrots etc.”

She says the brand also communicates a “Cook, Create and Celebrate strategy,” where recipes are showcased in addition to the use of fresh cranberries in holiday décor from cranberry garland to use in floral arrangements and centerpieces.

When most people think of Sun-Maid, they think of the iconic woman who dons a red bonnet and a white blouse inside a circular yellow background. Many people also think of raisins. However, Sun-Maid sells other products including dried cranberries. The Kingsburg, CA-based company is one of the leaders in the dried fruit category in the United States.

Joe Tamble, vice president of sales execution, says Sun-Maid tries to get across to consumers that dried fruit is a healthy snack. Tamble notes a recent IRI marketing study suggests nearly half of American consumers snack three times a day. Over the past five years, the dried fruit total is up in both dollars and units.

“This subcategory continues to grow, because it’s a better-for-you alternative,” says Tamble, who notes the single serve packages are gaining traction, because consumers appreciate the portability. “We’ve done cross-promotions with other brands in the produce section with boxed cranberry bread and side dish mixes,” shares Dignan. “Couponing and in-store promotions are always a great way to give back to loyal consumers throughout the season.

“We are very customer-centric and focused on programs, packaging and pricing that meet the needs of each of our retailers,” says Dignan. “Some may include recipe tearpads on shippers while others, we offer a package that most fits the need of their shoppers.”

There are many ways Sun-Maid is getting its message out. One such way is the company’s website, which Tamble notes tells the story of how dried fruit fits into the snacking trend.

The company also works with retailers. “We know people are making an effort to snack healthier and better, so we try to educate consumers and our retailers,” says Tamble. When doing so, he says Sun-Maid emphasizes the best option for dried cranberries is the produce section.

“When in the produce section, the growth rate is 30 percent higher than when in the baking aisle, so we work with retailers to merchandise and put the dried fruit in produce,” says Tamble. The company also works with in-store nutritionists who support healthy trends. “As more people read ingredients and labels, consumers are becoming more educated,” says Tamble, who adds some people get this information from their phones while in the store.

Wilson of the Cranberry Network, who describes the cranberry as resilient, also has some tips for retailers. Because sales can be slow when cranberries first come out in early October, they should be placed in a cool, dry refrigerated display and not left under misters or in an unrefrigerated area.

While those in the cranberry industry are anxious to see this fruit accepted as more than just part of a Thanksgiving tradition, one should not overlook this-all important holiday.

In 2015, New York City-based Pollock Communications worked with the Cranberry Marketing Committee and created an award-winning campaign that set out to engage Millennials through a cranberry social media photo-sharing contest timed to “Friendsgiving,” which is about celebrating the holidays with friends in the days and weeks before and after Thanksgiving.

According to Louise Pollock, president of Pollock Communications, the company did research and found no foods had a Friendsgiving presence on social media sites. “So, we saw a real opportunity for cranberries to own Friendsgiving,” says Pollock.

What Millennials were doing with cranberries beyond serving them with dinner impressed Pollock. These uses include utilizing fresh cranberries to make table decorations, wreaths and even wearing them as jewelry.

“It was an opportunity waiting to happen, and it was the perfect vehicle for the Wareham, MA-based Cranberry Marketing Committee to launch a strong social presence with Millennials,” says Pollock.

Michelle Hogan, executive director of the Cranberry Marketing Committee, says the goal is “to keep cranberries top of mind among Millennials and provide them with the recipes and resources they need to include cranberries in their meals and celebrations.”

In order to promote the photo contest, the Cranberry Marketing Committee works closely with retailers and supermarket registered dietitians to bring this promotion in-store and encourage shoppers to enter the contest. By promoting the contest, retailers drive entry and, therefore, purchases.

“We also utilize our many social/digital platforms to showcase the versatility of the cranberry,” says Dignan of Ocean Spray. “We offer a special section of our website with planning tools, pre-set menus, recipes and more.”

This year, the Cranberry Marketing Committee and Pollock Communications created a Guide to Entertaining with Fresh Cranberries that feature five recipes and five décor ideas with step-by-step directions.

This year’s Friendsgiving celebration kicks off on October 17 when a national press release will be sent out. The Cranberry Network is also reaching out to Millennials. The group created new packaging for cranberries last year under the Naturipe label, which they call a “Grab‘n Go.” The cranberries are packaged in a stand-up bag with graphics, zipper seal, and handle. The goal is to capture the Millennials who spend less time in the kitchen but are health conscious.

“The next generation of consumer is who we have in mind,” says Habelman Brothers’ Wilson. “We want to get them to buy into the many advantages of regularly consuming fresh cranberries in season and storing extra in the freezer for off-season availability.”

“We want them to use cranberries for grandma’s recipes as well as for smoothies, cocktails, decorations and ultimately making fresh or fresh/frozen cranberries part of their regular diet. Buy four. Freeze three.” Clearly the cranberry community is hoping to see the bright red fruit brighten up a Thanksgiving table but also provide a healthy snack in many forms throughout the entire year.