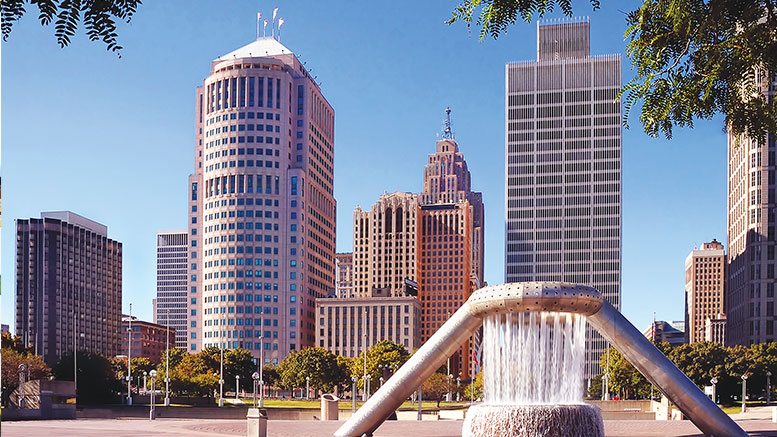 While the city has entered the modern age of produce tracking and shipping, Detroit wholesalers feel the lure of serving as an intermediary between local, urban consumers and nearby farms.

Detroit is aching for a comeback after decades of a stagnating economy and a declining population. The flight out of the city already slowed to a trickle the past few years, and local leaders see hopeful signs this once proud city is poised for a comeback.

“Detroit’s back, baby,” says Dominic Russo, buying and sales director for Rocky Produce, Detroit. “There are many big things going on to rejuvenate the city, and it’s great to see. Young people are coming to the city, and entertainment-wise, it is one of the hottest spots in the country. Businesses are moving downtown.”

The Russo family has been a fixture in this city’s produce business for four generations, dating back to when Dominic’s father, Jack, immigrated from Terrasini, Sicily, and began selling fruits and vegetables. After serving in the Korean War, two of Jack’s sons started Rocky Produce. The children expanded the business beyond Michigan, and today’s generation continues the legacy.

“Detroit filed for bankruptcy in 2013, and not long after that, investors led by Dan Gilbert began buying up undervalued properties and renovating them,” says Russo. “We just need more big corporations to come downtown.”

Gilbert, founder of Quicken Loans and owner of the Cleveland Cavaliers basketball team, invested billions of dollars in Detroit real estate and gave the revival a further shot in the arm by moving his Quicken Loans headquarters (15,000 employees) from the suburbs to downtown.

Detroit was a magnet for working-class immigrants from Eastern and Central Europe for nearly a century. The city’s population swelled to its peak of more than 1.8 million residents during World War II with the boom that accompanied the industrial expansion as the industrial arsenal of democracy.

But then came the end of the War boom, followed later by the decline of the American automobile industry. Every decade since 1950 the population has significantly dropped as jobs and residents steadily left Detroit.

The demographics of the larger Detroit metropolitan area (4.3 million people) is diverse, with nearly 70 percent Caucasian, more than 20 percent African-American and a smattering of Asians and Hispanics. There is also more economic diversity in this area, as the average household income exceeds $75,000.

But Gilbert thinks in terms of the city in which his father and grandfather built small businesses, and other civic leaders are buying into his vision of Detroit as a hub of muscles and brains.

Unemployment in the city has dropped to about 6 percent, after approaching 30 percent during the darkest days before the bailout of the Big Three automakers, and the city’s produce marketers now speak of a renaissance.

“There are a lot of cranes at work in downtown Detroit, and I think the best is yet to come,” says Nate Stone, who handles special projects at Ben B. Schwartz & Sons Inc., Detroit. “I think a lot of people would say Detroit has come back.”

For more than a century Ben B. Schwartz has been a fixture in the Detroit wholesale produce business, making produce from nearby farms available to city residents. “For Ben B. Schwartz, which was established in 1906, local produce has always been a part of what we sell,” says Stone. “We’ve been selling local produce forever. These guys have been pulling their trucks up to our docks since 1906.”

With more than 50,000 farmers harvesting from around 10 million acres, Michigan is able to supply an incredible variety of fruits and vegetables from within the state.

The state supports local produce through its Pure Michigan program, which began in 2006 as a tourist promotional effort, but expanded six years later to also embrace the fruit and vegetable industry.

“Local is regional,” says Stone. “But local doesn’t just mean Michigan. It is regional and seasonal. It would include parts of Ohio, at least.”

Many local farmers sell their goods in a farmers market that can track its ancestry back to the 19th century, when the Eastern Market was established in Cadillac Square for sales of hay and firewood. The Eastern Market has since moved a mile northeast from the heart of downtown, where its 43-acre, six-block site serves as home for more than 150 produce and specialty food businesses, and includes both wholesalers and three huge weekly farmers markets.

Roscoe & Horkey Farms started in the 1960s when George Horkey Sr.’s son married Murl Roscoe’s daughter, and the newly merged farming families grew potatoes, cabbage, peppers, tomatoes, strawberries, melons and corn that they sold at the Eastern Farmers’ Market. The company also built a business marketing produce for other farmers in the neighborhood. “We start harvesting peppers in early June, and continue with potatoes up until the middle of October; then we sell them out of storage,” says Horkey. “Then we get ready for the next year. We probably have 15 potato varieties.”

The Eastern Market has a traditional farmers market on Saturdays with more than 225 vendors and up to 40,000 visitors, a smaller craft-oriented market on Sundays and a market oriented toward cooking instruction on Tuesday. The farmers at the market also peddle produce all week to walk-up trade, foodservice purveyors and retailers.

“Not too many of the box stores walk either the Terminal Market or the Eastern Market anymore,” says Horkey. “With Kroger, we sell cabbage, sweet corn, potatoes and some peppers, the things that we grow. It’s not just filling gaps. We also grow banana peppers and Middle Eastern herbs. We sell to a lot of foodservice and retail people in the Detroit area. Our customer base has not changed.”

The city also has a vibrant wholesale market that serves as a produce hub, linking farmers with customers throughout the Midwest and beyond.

Despite changes in the city and the produce distribution system, the Detroit Terminal Wholesale Market has remained at its strategic location on West Fort Street for nearly 90 years and counting.

The market is just across the Detroit River from Windsor, Canada, and Highway 401 to Toronto, and right on Highway 75 headed south along the banks of Lake Erie to Toledo, OH, and beyond.

The number of wholesalers on the market has consolidated from more than 40 to fewer than 10, as a result of declining population and the increasing role of supermarket distribution centers. The remaining businesses have expanded their product range.

“In one sense, the market is more diverse in that we have reached more demographics with different ethnicities and the eating habits that come along with different cuisines,” says Dominic Riggio, president of Riggio Distribution Co., Detroit. “In another sense, the market is less diverse in that there are fewer vendors and fewer companies ‘specializing’ in any particular product line.”

The Detroit retail produce trade has consolidated even more than in most urban areas as Kroger, Meijer, Wal-Mart, Sam’s Club and Costco combine for a total of 75 percent of produce sales in the metropolitan area. With these large retailers sourcing most of their fruits and vegetables through their own distribution centers, the role of the wholesaler has changed significantly.

“Consolidation has not limited us, but it has created a higher cost of doing business,” says Riggio. “We often have to ship orders further than we have in the past. The opportunity is still there, but it costs more for that business.”

The greater use of distribution centers has left wholesalers taking care of the gaps for the large retail chains, and filling out their own businesses with foodservice and independent retailer customers.

“With the big chains it has changed somewhat because they bring in their own produce and ask us to fill in,” says Mike Badalament, sales representative at R.A.M. Produce Distributing, Detroit. “We do a very strong foodservice business, and still a lot of retail.”

R.A.M. Produce has been at the Detroit Terminal Market for 30 years, building on its beginnings in tomatoes to ship a wide variety of fresh vegetables and fruit to retailers and foodservice purveyors in Detroit, nearby Michigan cities and regionally to Ohio, Illinois, Indiana and Canada. “I’ve been here all my life; I’ve been selling here at least 45 years,” says Badalament. “The diversity of produce you have to handle has increased. Your lettuces have all those varieties, and the citrus, too. And there are all the apples that are out there.”

While the number of wholesalers at the Terminal Market has diminished, those that remain generally still serve the same customers as in the past.

“The wholesalers that are down there have grown with the customer base,” says Rocky Produce’s Russo. “We sell to a good mix of independents, large supermarket chains and foodservice.”

Long timers have noticed the difference, as the younger generation of wholesalers bring the business into the age of modern technology.

“As in any business, it evolves,” says Ben B. Schwartz’s Stone. “There are not as many wholesalers at the market as there used to be, and customers order by email or text. People aren’t walking the market like they used to. It’s gotten modern. The fourth generation has taken this to incredible heights. ”

“One big thing that has changed is the phones,” says Badalament. “Somebody can tell you it’s snowing in Mexico and show you a picture. The information out there is incredible. It’s just a different world. The cold chain has also improved. Freight costs have gone up with electronic logging. Then you have Good Agricultural Practices, sustainability and a lot of things that affect the business.”

Detroit also reflects the contemporary trend of eating more fresh fruits and vegetables as part of a healthier lifestyle.

“Everybody is living healthier. We’re still selling to every age group. We sell deep into Canada and another nine states,” says Stone.

A greater interest in healthy eating and a changing demographic within the greater metropolitan area have spawned upscale produce outlets.

As the area enters the new age of produce distribution, the veteran wholesalers find the business as tough as ever.

“I’ve got a lot of respect for the people we compete with,” says R.A.M.’s Badalament. “I’m humbled every day in this business. Our turnover is good, so the produce is very fresh. We also have a very experienced staff.”

As the city’s produce business evolves, it remains rooted in its role as a hub delivering produce from the many local farms and around the country to a diverse regional population.

“Detroit is a highly competitive, high-quality market,” says Riggio. “It has many influences, from its diverse demographics to the relationship and proximity to other markets, as well as its geography relating to local and year-round produce supply.”

While the city has entered the modern age of produce tracking and shipping, Detroit wholesalers feel the lure of serving as the intermediary between local, urban consumers and nearby farmers.

“Local produce is a big thing because it affects the local farmers,” says Russo. “Grown in Michigan is certainly local, but so are the Midwestern states and southern Ontario. The local farmers sell directly to our customers, and that’s great. Traditionally, we have dealt with produce shipped in from outside the area, but we’ve been doing more and more local produce. We’ve found great success partnering with the local farmers. The local season is relatively short, but the produce is as good or better than other growing areas.”