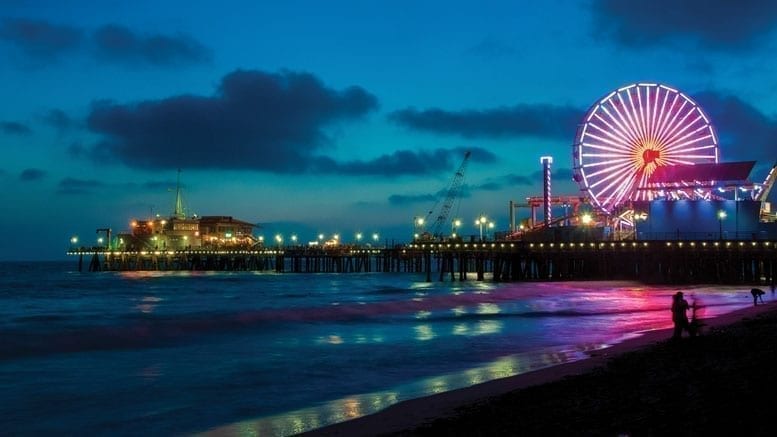 A city suited to supply fruits and vegetables from around the world.

Los Angeles mirrors the ethnic changes in our population and in the fruits and vegetables we eat — more than almost any other of our great cities.

Fifty years ago, 3 in 5 of the city’s 2.8 million residents were non-Hispanic white, largely the descendants of agrarians from Oklahoma, Kansas or Western Pennsylvania seeking refuge from the Dust Bowl or from the consolidation that swallowed family farms a generation before.

Nearly 1 in 5 Los Angelinos in 1970 were African-American, the descendants of Southerners who came west seeking jobs during World War II and the Depression that preceded it.

Hispanics, largely from Mexico, were already 17% of the population five decades ago, and Asians, mostly from Japan, just 3.6%.

Then came the great transformation that made Los Angeles the nation’s great polyglot.

Already by the 2010 U.S. Census, nearly half the city’s residents identified as Latino or Hispanic, as globalization moved rural residents off the land in Mexico and Central America, much as it had Arkansas and Nebraska a generation or two before.

The door to the Pacific Rim swung wide open and the growth of Chinatown, Koreatown, Thai town, Filipino town, Little Bangladesh and Little Tokyo brought the Asian population to 11% and growing as of the last census.

The Anglo population dropped to little more than a quarter of the residents, as high costs made The City of Angels no place to retire, and enough African-Americans fled high housing costs to drop their population to less than 10% by 1970.

Even in recent years, the city has continued to change, and the changes bring challenges and opportunities that define the business of produce in Los Angeles.

The growing diversity of metropolitan Los Angeles has spawned the development of many neighborhood ethnic markets and produce wholesalers who keep them stocked with fruits and vegetables from back home.

“Recently I visited a Chinese venue that had pallets of ‘moon cakes’ and mesh bags of fresh lychees,” says Bill Vogel, president and chief executive of Vision Produce Company, formerly called Tavilla Sales Co., of Los Angeles. “How do you fit that into an overlap? So, to overlap and serve a variety of ethnicities, one has to weave a carefully planned formula relating to a store-by-store neighborhood understanding. That is important because food is tantamount to a specific culture, and that group may be the focus of the store; we see some of these operations with heavy traffic.”

Like most metro areas, the business of produce in Los Angeles is dominated by a handful of large chains with distribution centers that allow the companies to largely bypass the wholesalers except in times of need.

“I have been in this business 32 years, and when I started, we had at least 20 different chain stores we could call on to get business,” says Jesse Garcia, vice president of sales and managing partner at L.A. Produce Distributors, based in Los Angeles. “Then the big chains started buying the smaller ones, so today you basically have four or five chain stores. There are also the independents that do a tremendous volume because they are very aggressive on the pricing and on the weekly ads.”

By last year, just four large retailers — Kroger, Costco, Safeway and Trader Joe’s — accounted for more than half the retail produce sales to the nearly 4.5 million residents of the Los Angeles Metropolitan area.

The ranks of the top 30 supermarkets in the area include, alongside the familiar national corporate firms, the headquarters of the nation’s largest Hispanic and Asian supermarket chains, Cardenas and Tawa, respectively; another Japanese chain with 11 stores in the area, Marukai; three additional Hispanic chains, El Super, Vallarta and Numero Uno: and Ukas, started by an Indian immigrant who came to the United States in search of a high-tech education who took a career turn to open 11 supermarkets, and stores serving too many other ethnic groups to list.

This emergence of independents and small-to-medium-sized chains has left its mark on Los Angeles produce: It has increased opportunities and competition among the wholesalers even in the face of consolidation among the major mainstream retailers.

“There’s a lot more competition in produce,” says Alan Pollack, general manager of Coosemans LA, Los Angeles. “There are the ethnic wholesalers, and a lot more farmers’ markets are popping up.”

Pollack has seen Coosemans L.A. adapt and evolve since the days in the late 1970s’ when he helped immigrant Herman Von den Broeck start the company by flying Belgian endive into Los Angeles International Airport, loading it into the back of his Cadillac and delivering it to a route of high-end gourmet restaurants.

“Los Angeles has the largest Iranian population in the world outside of Iran,” he says. ‘They’ve been coming here for decades. People are coming from South and Central America, Asia and the Middle East. It’s getting more and more diverse. We’re selling things like Persian cucumbers, different tomatoes and tropical fruits. It’s always changing, and we’re always adapting to the changes. We’re young enough and small enough to be able to see what the market needs, and we’re able to find growers who can supply it.”

Los Angeles Produce Distributors has developed a network of growers from nearby Mexico, Guatemala, Costa Rica, Ecuador, Peru, and Chile, as well as Hawaii and California’s Central Valley just up Highway 5.

The company brings a steady supply of avocados, melons, grapes, berries, tomatoes, citrus, mushrooms, papayas and other Hispanic, Asian and tropical specialties to its facility, which is located at the Los Angeles Wholesale Market.

“The market is way more diverse than it was a decade ago; the ethnic population of Los Angeles has changed tremendously,” says Garcia of L.A. Produce Distributors.

“We have Middle Easterners, Mexicans, South Americans and Africans. I think it will keep changing, and we have to adapt to the different ethnic groups and provide them with the produce they need. There is an overlap of the ethnic markets; you see a wide variety of produce at all the retailers now,” notes Garcia.

Many other Los Angeles produce wholesalers have built businesses by developing networks of growers in nearby Mexico who regularly offer a range of specialty items.

“When we visit growers in Mexico, we find all kinds of small partnerships they have with ethnic end-users growing specific items for them,” says Vogel.

“This is a far different model than mass production of main produce line items, and it may not be suitable for their business model; think direct sourcing, which we have been working on for 25 years,” adds Vogel.

“Our outlets have multiplied instead of being limited,” says Vogel. “Watching this play out is extremely interesting in Southern California; there are many expert teams at retail honing their skills against a surge in ethnic, local retailing with some not so small any more. There is no simple answer to the types of markets to be served as each category has become diversified,” says Vogel. “Take foodservice, for example — it’s not just restaurant supply; it includes food-prep companies with target-specific venues, processers who use fresh for a myriad of market lanes, and packagers of value-added for a variety of end-users.”

The business of produce in L.A. has shifted from a large number of chains that relied on wholesalers, to a smaller number of major retailers with their own distribution centers and network of grower-shippers, to a large number of independent retailers targeting one of the city’s many ethnic groups.

“We primarily serve consumers through retailers and foodservice distributors; however, we are always looking to grow into other opportunities,” says Berkley. “The possibilities are endless. If it isn’t retail, it is meal kits, restaurants, online grocers and wholesalers.”

The Los Angeles produce wholesale business is conveniently located to source fruits and vegetables from the Central Valley, Mexico and Central America, and ship it out to the major West Coast cities.

Los Angeles is also a hub for organic produce. The farms of the Salinas Valley and the Central Valley combined to produce, according to USDA statistics, 10 times as much organic food as No. 2, Wisconsin.

“Another example of the diversity of the market is the continued developing demand in local and organic,” says Vision Produce’s Vogel.

With its opening to both Latin America and Asia, Los Angeles is an indispensable national hub for nationwide distribution of much of the world’s produce.

“We remain a large FOB loading point for many items, often seasonal, but the wholesalers and distributors have acted to be year-round suppliers,” says Vogel. “A good example is with fresh chilies — you can get all varieties including related specialty and peripheral items every week of the year; by ignoring the Los Angeles market, you might be missing important produce opportunities.”