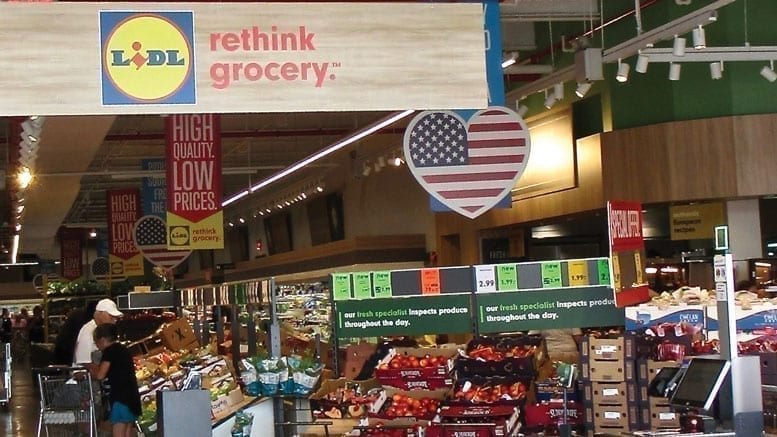 Many European retail chains have not done well in the United States, which divided the company’s board of directors on strategic moves.

Next year could be a big year for Neckarsulm, Germany-based Lidl, as the company’s executives change its strategy to expand in the United States.

The success or failure of Lidl could eventually impact the produce business given that another limited-assortment German discount grocery chain, Aldi, has helped change U.S. shopping habits. Lidl and Aldi are among the biggest and most significant grocery retailers in Europe.

The success of Lidl and one of its strongest European rivals, Ahold — already a major grocery store competitor in the United States with more than 1,900 stores in 36 states, according to the company’s account — -could eventually impact America in something of the same way it has in Europe. There, Lidl and Aldi, called hard discounters in Europe, undermined the once dominant hypermarkets and have put a major dent into supermarket sales.

Yet, observers have stated that Lidl’s board was always divided on the U.S. expansion. Although Aldi has done well in the United States, many major European food retailers, including Tesco, Carrefour and Auchan, already have failed in the United States.

Lidl made a conspicuous entry into the United States during 2017 and announcing a quick expansion to as many as 100 stores by summer 2018, where Aldi was slow and patient in growing the business since its U.S. introduction in the 1970s. However, Lidl ran into trouble quickly. Its strategy of opening ground-up stores in suburban and exurban communities didn’t generate the returns it expected. So, last year, after opening about half of the stores intended for its initial market introduction, the company acknowledged a strategic adjustment and changed Lidl U.S. chief executives, appointing Johannes Fieber, who had been chief executive of Lidl Sweden, to the position. It determined to lease space as well as build more ground-up stores. The move paved the way for it to open its first New York City store, in the borough of Staten Island, a year ago in a very different facility. The new Lidl not only occupied leased space but also occupied a portion of a shopping mall. At the time, a Lidl spokesperson noted the company counted on the mall location to generate trial to what was a new retail concept in the community.

We are excited to expand into many great communities on Long
Island and across the New York City area. ….

The company also announced a major move with the purchase of 27 Best Buy stores. A couple of the stores were in New York City and another in New Jersey, but the vast majority was located in the Long Island suburbs, split about evenly between Nassau and Suffolk Counties. Although not considered a city, densely settled Nassau County is home to almost 1.4 million people in 453 square miles. Suffolk County is home to about 1.5 million people in 2,373 square miles. Relatively affluent Long Island represents a major investment for Lidl and, so a major test.

Rival Aldi already operates several stores on Long Island as well as nearby Brooklyn and Queens, where Best Buy has one of its stores. Meanwhile, Ahold, operator of one of Long Island’s strongholds, Stop & Shop, recently purchased the major local supermarket chain, King Kullen, in what observers say is a response to the Lidl move.

When making the Best Buy announcement, Fieber noted, “We are excited to expand into many great communities on Long Island and across the New York City area and introduce more customers to our simple and efficient approach to grocery shopping, which will mean high quality and huge savings for more shoppers.”

Lidl’s move into Long Island will be a mixed project. Its first wave of Long Island openings is planned for early next year, which will be part of a 25-store expansion on the East Coast. Lidl also will open ground-up stores in Plainview and Center Moriches, NY, which are new locations, with the Plainview replacing the Best Market store currently located in Hicksville, NY. In mid-October, the company said it would remodel Best Buy stores and open them as Lidl’s in the towns of East Meadow, Oakdale, Patchogue and Lake Grove, NY by summer of next year.

Although a Lidl spokesperson said the company wasn’t ready to announce opening dates for the first wave of stores, when they do open, it will be a big day for Lidl and Long Island. Lidl will begin reshaping the grocery store landscape across a market of almost three million people and, with success, entrench itself in the U.S. food retail market. If Long Island consumers don’t embrace Lidl, though, justifying further investment in the business would be difficult.