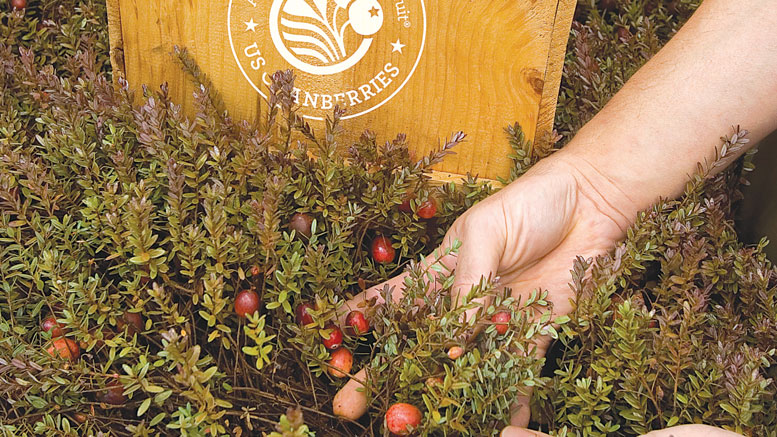 Cranberries and autumn accompany each other, making the season ideal to promote the original American super-fruit. The largest fresh cranberry selling period begins in early November, leading to Thanksgiving and beyond.

The U.S. fresh crop is harvested and sold in stores September through late December. Because of the fresh crop’s limited seasonal availability, retail supermarkets must develop effective displays heralding the new season’s crop.

“Cranberries have really taken off,” says Don Drust, owner of Drust Markets, a part of ShopRite in Wallingford, CT. “They’re a go-to item. They’ve become more and more popular, and not just with the holidays. People buy and freeze them for later. If we could get fresh ones year-round, they would sell.”

The colorful red fruit is a basic item during the holidays. “Cranberries lend themselves to cornucopia displays and being shown in rustic wooden crates, further connecting the fruit with the farms from which they are harvested,” says Karen Cahill, marketing director of the Cranberry Marketing Committee, based in Wareham, MA.

Cranberries are an important part of the holidays. “Most shoppers are looking for fresh cranberries to add to their Thanksgiving dinner, Friendsgiving dinner, and also their Christmas dinner,” says Brian Vertress, director of business development for Naturipe Farms LLC, in Salinas, CA. “In addition to leveraging fresh cranberries for their meals, we are finding consumers are using them as a decorative piece for their holiday tables.”

Cranberries are a delight for shoppers and retailers. “They are a holiday treat,” says Mark Cote, regional produce merchandiser for Redner’s Warehouse Markets, Inc., a 44-store chain based in Reading, PA. “Cranberries just make for a lot of friends around the holidays. People remember where they bought their cranberries. Because they’re seasonal, the window’s up. Before you know it, it’s time to go down. They’re not global. You can’t just get them anywhere.”

In the produce department, cranberries are the sixth leading U.S. berry, behind blackberries and mixed berries but ahead of gooseberries, saskatoon berries and boysenberries. For the 52 weeks ending Aug. 9, fresh cranberries’ 68% share of total berry dollar sales, at $39.6 million, declined .10% from the previous year. Cranberries’ $2.56 price per-volume increased .02 cents, according IRI, a Chicago-based market research firm.

“Cranberries just make for a lot of friends around the holidays. People remember where they bought their cranberries.”

Harps Food Stores in Springdale, AR, displays cranberries with other Thanksgiving and Christmas staples, including celery, sweet potatoes and 10-pound bags of potatoes. “They’re probably not as important as they use to be 20 years ago,” says Mike Roberts, director of produce operations, “but they’re still an important item and one customers still look for Thanksgiving and Christmas. We sell a bunch of them.”

U.S. per-capita fresh cranberry consumption remains consistent at .09 pounds, with processed per-capita consumption clocking in at 1.95 pounds, according to the Cranberry Marketing Committee. Fresh domestic sales typically constitute about 3% of the usual 10.4 million barrel U.S. harvest. Acreage, which is primarily in New England, the Upper Midwest and the Pacific Northwest, remains consistent.

Cranberries make for spontaneous sales. “It is real important to get that promotion out as early as you can,” says Cote. “You want shoppers to come to that one-stop shop to fill their carts up not only with cranberries, but everything else. Without [cranberries], customers may not buy turkeys, stuffing and other fixings. Cranberries are a real benefit to have around the holidays.”

Merchandisers should plan to capture those impulse purchases. “If you build it, they will come is the mantra for any seasonal item, and especially for cranberries,” says Vertress. “While many consumers have them on their list, there is also a big impulse aspect that will entice consumers to grab-and-go with a bag of cranberries.”

To add register ring, Barry Botelho, director of sales development for Decas Farms Cranberries, Carver, MA, recommends deploying cranberries as cross-merchandisers. “We have been promoting the cross-merchandising of fresh and dried cranberries in produce since we also see a large spike in dried sales through the holidays,” he says. “Placing floor displays near coolers of fresh cranberries is a great way to achieve this.”

To reinforce cranberries’ place with the fall holidays, retailers can display cranberries near other seasonal items, such as pumpkins and squash. “Cranberry sauce is a must on Thanksgiving tables, but cranberries also pair extremely well with other fall fruits and vegetables, and have a versatility factor that should not be underestimated,” says Cahill. Including a recipe or serving suggestion inspires shoppers to add cranberries to their meals.

Other forms of cranberries, including dried and juice, can also be displayed in the produce department with fresh cranberries to make a visual connection for shoppers. The abundance of dried cranberries helps the overall cranberry category. “The dried cranberry is coming into focus,” says Drust. “People are baking with them. My wife just made a cranberry bread pudding she saw a recipe for. There are so many recipes for cranberries now and so many different uses. It’s incredible.”

Retailers can promote the fruit’s nutritional advantages and be aware of fresh cranberries’ limited season. “Cranberries are a nutrient-dense super fruit native to North America,” says Isaac Zarecki, public education and communications manager for the Wisconsin State Cranberry Growers Association, based in Wisconsin Rapids. “While many delicious cranberry products are available throughout the year, autumn and the holiday season are especially important. Many cranberry dishes and drinks are staple features at family gatherings.”

Cranberries are often merchandised with other berries or next to carrots or celery. “Both of those line up nicely with consumers’ holiday shopping lists,” observes Vertress. “In either location, the key is to ensure enough space is allocated so the cranberries are easy to find.”

Fresh cranberries also spur sales of other holiday foods. “Be creative by considering merchandising in the cooler with fresh turkeys, or next to traditional holiday items like yams, stuffing, green beans and potatoes,” says Botelho. Drust Markets cross-merchandises fresh cranberries in the meat department, alongside turkeys.

Merchandisers should invest time in promoting the fruit. “Cranberries really need a little extra attention due to the seasonality of the item,” advises Vertress. “It’s okay to start small in September/October, but by November, best-in-class merchandisers are increasing the display size and looking for secondary locations.”

Redner’s displays cranberries in three to four rows in refrigeration, adjacent to celery and celery hearts. It also promotes bags on European tables next to sweet potatoes, sweet onions and large celery displays. To preserve freshness, produce department evening managers place the bags in the cooler. “They don’t have too many legs,” says Cote. “They feel hard as a rock, but can go soft quickly with the temperatures.”

Proper care should be taken to effectively display cranberries. Similar to other berries, fresh cranberries should not be displayed under water sprayers. Bags should be kept dry and cool, advises Botelho.

Display sizes must match demand. “Once November hits, it is time to increase the display size and upsize the cranberry pack,” recommends Vertress. “As the majority of cranberry sales happen in the three weeks leading up to Thanksgiving, this is the critical selling period for cranberries. Secondary display locations are a great addition for this three-week period as well to help catch the impulse shoppers.”

At Harps, produce employees empty several bags of cranberries into water-filled containers with shoppers using sifters to capture the floating berries. “This gives the displays some atmosphere and makes it look ‘Christmasy’,” says Roberts. “We don’t sell a ton that way, and only do it in our top stores. That really gives the display some pop and is kind of novelty type of thing, but it’s effective.”

Growers typically produce ample volume, which makes for ideal promotions. “That creates a low cost and we can keep that low retail and pass onto the customers,” says Cote. Cote notes the $1.28 per package delivered to stores can be merchandised for $2, presenting retailers a nice markup.

The best time for promotions is just before Thanksgiving. “The peak week for fresh cranberry sales is two weeks leading up to Thanksgiving,” says Botelho. “All promotional tactics have proven effective to include BOGOs (buy one, get ones), $ off, ads, EDLCs (everyday low cost) and TPRs (Temporary Price Reductions).”

Retail produce executives who studiously build attractive displays in the right locations can see lifts of 25% vs. stores that carry too few berries or don’t place them in a prominent positions, notes Vertress. “Additionally, 60% of cranberry sales occur in the three weeks prior to Thanksgiving. A tactic we’ve witnessed to help drive additional sales is to upsize the pack during this key selling period. While 12 ounces is more of a standard pack for conventional cranberries, moving customers up to a 2- or even 3-pound bag during this three-week period is a great way to drive incremental dollars through the register.”

Redner’s usually creates ads for cranberries in early November and typically places them on ad two weeks before Thanksgiving, running that same price through Christmas. “If we do it right, we will have a case or two at the end of the year for the freezer, not the rejects,” says Cote. “We can then maybe get another two to three weeks after that, as people going to parties and dinners want fresh cranberries. But, before you know it, supply stops, because it’s the end of the season.”