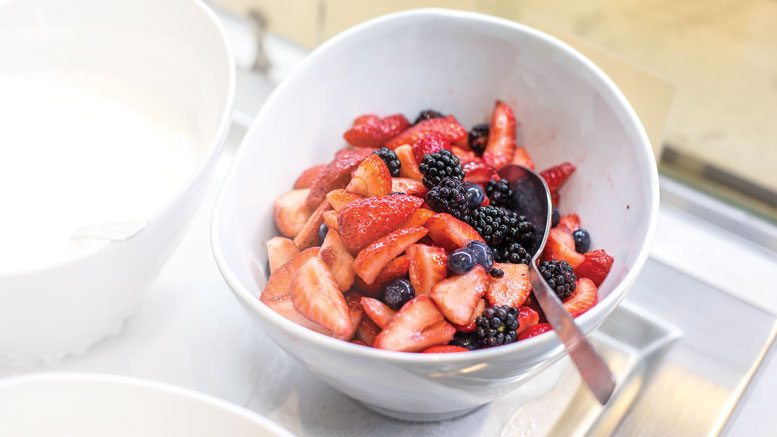 Photo Courtesy of Tastes On The Fly

Gone are the days when fruits and veggies were a rare sighting before taking flight.

No longer is a thin slice of tomato atop a fast-food burger or limp lettuce leaf layered in a stale sandwich the only fresh produce available at airports. Today, there’s everything from fresh-cut fruit salads in retail shops to avocado toast, beet burgers and vegan Stromboli filled with cherry tomatoes and artichoke hearts on the menu in sit-down restaurants.

In fact, 71 percent of restaurants in the United States’ 30 busiest airports offer at least one high-fiber, plant-based, vegan meal option, according to the Physicians Committee’s 2015 Airport Food Review, published by the non-profit Washington, D.C.-based Physicians Committee for Responsible Medicine (PCRM). This represents a 25 percent increase from PCRM’s 2001 edition of this study, meaning fresh produce is more available for those on the fly.

“We see the trend of fresh prepared items growing, and that includes the use of more fresh produce both as a part of a composed dish, or as a standalone item like a fruit cup or vegetable crudité,” says Anthony Meidenbauer, vice president of food and beverage for the travel and hospitality business of Delaware North, a Buffalo, NY-headquartered global foodservice and hospitality company.

There are two formats in which airport travelers typically find fresh produce. One is grab-and-go in everything from retail shops that also sell magazines to kiosks and counter-service outlets. The other is at sit-down restaurants.

“Grab-and-go is one of the largest parts of our airport foodservice sales,” says Michael Schulz, director of cost management and standards for HMSHost North America, based in Bethesda, MD. “Layover time is shrinking and people want to be able to pick up something fast.”

Fresh-cut fruit is among the most popular grab-and-go produce offerings because it’s easy to eat.

“Instead of just grapes, strawberries and blueberries, we’ve now expanded to several different kinds of mixes that include pineapple, raspberries, kiwis, melons and other fruits,” says Pascal Jubault, food and beverage director for culinary and supply chain at Paradies Lagardère in Atlanta. “These not only appeal in terms of taste, but they are colorful and we merchandise them on refrigerated racks at eye level. As a result, we are seeing sales of fruit cups increase 3 to 5 percent year-over-year.”

Regionality plays a role in what customers want in terms of fresh-cut fruits, according to Schulz. “In Canada, the local market wants cantaloupe. In the southeastern region of the United States and Carolinas, berries are big. Customers in the northeast like their fruit blends, and mangos are a must in cups sold in major cities like New York and Los Angeles with large Hispanic and Asian populations.”

Hand fruits see demand, too, says Schulz. “If it has an edible skin, like an apple, we’ll spec no wax, no tags — nothing that could lead to a poor eating experience. Plus, we are extraordinarily focused on food safety, so apples will be wrapped.”

“We have a lunch or Bento box program where we package baby carrots and hummus, as well as turkey, cheese, grapes and apples in three or four different styles,” says Jubault.

Much of the fresh-cut fruit and vegetables sold in airports are processed on-site or at off-site commissaries. However, national suppliers, such as Naples, FL-based Naturipe Farms, are seeking airports and other on-the-go venues to sell their value-added products. Naturipe is looking to sell its new six-item line of Naturipe Snacks in airports. The 5.5-ounce single-serve containers offer 3.5 ounces of ready-to-eat fruits such as strawberries, blueberries and grapes, paired with 1 ounce of cheese and 1 ounce of nuts.

“Airports and airlines are not typical foodservice channels, but we see a huge opportunity in value-added cut fruit and are putting together a business plan to approach this sector,” says Brian Jenny, vice president and general manager of value-added fresh for Naturipe Farms.

Produce stars in more creative ways at fast-casual concepts without dining rooms, such as Fresh to Order, an Alpharetta, GA-headquartered 14-unit chain with a location at Hartsfield–Jackson Atlanta International Airport in Atlanta.

“Top sellers are our Asian Salad with almond crusted tuna, which has mixed baby greens, tomatoes, avocado, pickled ginger, Mandarin oranges and Szechuan peanuts,” says Jesse Gideon, corporate chef and chief operating officer. “For sandwiches, it’s the salmon panini with avocado, a custom blend of nine lettuces, including tat soi and lollo rossa for depth of flavor and crunch, and our signature corn cilantro relish. We order 40-plus different fruits, vegetables and herbs for our menu.”

Another example is LottaFrutta, a quick-serve salad and sandwich shop with a location in Atlanta and at Hartsfield–Jackson Atlanta International Airport. Selections include the Dolce Vitta, a cup with 10 different fresh fruits topped with vanilla yogurt, granola and honey.

Both Fresh to Order and LottaFrutta are among brands operated by Concessions International in Atlanta.

“Signage that includes pictures of fresh produce, menu boards and advertising on concourse trains are some of the ways we let visitors know where they can find dining options in the airport that offer fresh fruits and vegetables,” says Ed Wood, purchasing analyst for Concessions International.

Airport restaurant menus differ from those of street-side establishments, says Delaware North’s Meidenbauer. “In an airport, diners typically don’t have the leisure of experiencing a menu and getting a bit more explorative. Instead, they want what they know and are comfortable with so they can eat quickly and catch their flight. These factors affect consumer choices, which in turn, greatly affect what we offer on our menus. As for fresh produce, we incorporate vegetables into menu items as part of the composed dish garnish, as well as offer them as center-of-the-plate items in our casual dining locations.”

However, culinary trends, especially with regards to fresh produce, are definitely a part of terminal dining. This is because, as concessioners say, they seek to simultaneously please three types of customers: families that may travel once or twice annually, frequent business travelers and airport employees.

“Kale is at the forefront just like on the street,” says Derik Mortenson, food and beverage manager for Concessions International. “Side dishes are coming back in favor with kale, hand-cut fries, roasted vegetables, cauliflower and grilled asparagus all showing double-digit growth. Root vegetables are branching out on menus beyond potatoes to include rutabaga, beets and fennel root.”

Pickled vegetables are also big on airport restaurant menus, adds Paradies Lagardère’s Jubault. “This includes pickled cauliflower, cabbage and mushrooms. Salads now represent about 15 percent of menu offerings, up 5 percent from a decade ago. Plus, 10 years ago no one ever thought of avocado toast. Now it’s among the Top Three sellers at breakfast in airports we serve nationwide from Atlanta to Los Angeles.”

Locale is a continuing movement in airports across the country, and this is reflected in the food served, according to Sean Matthews, senior manager of communications and public relations for HMSHost. “The industry term for this is ‘sense of place,’ and it has been an important trend for most airports. In fact, out of our approximately 300 brand partnerships, roughly half are local or regional. This is something we’ve helped to evolve through culinary innovation with the introduction of local/regional brands, regionally inspired menu designs and increased local sourcing.”

This sense of place is evident in the food and non-food concessions at Tampa International Airport, Tampa, FL.

“We are a tourism destination and part of our RFPs for concessions is we encourage local brands that bring a taste of the region,” says Nina Mahoney, senior manager of the airport concessions department.

A good example of this is RumFish Grill, an iconic Tampa restaurant that opened a second location at the city’s airport in 2016 operated by Delaware North. The restaurant, known for its 33,500-gallon aquarium, which is replicated in a 1,300-gallon size at its aviation location, sources local fish and produce.

Sourcing fresh produce for airport-based foodservice operations and street-side restaurants is similar, says Delaware North’s Meidenbauer. “We work with Pro-Act, a national program that partners with local produce distributors to procure the high-quality items we consistently need and use at our locations. More times than not, the truck delivering our fresh produce is most likely making drop-offs at the popular street-level restaurants. These partnerships help us get great produce at competitive prices, which help keep costs down for our customers.”

What are different in terms of sourcing are capacity and space constraints.

“Consider that an airport restaurant does three to four times the volume of a street-side restaurant,” says HMSHost’s Schulz, who adds his U.S.-based brands order nearly 3 million cases of fresh produce annually.

Meanwhile, the back-of-the-house is often less than one-half or one-third of a street-side restaurant, according to Fresh to Order’s Gideon. “We have 3,000 square feet total at the airport, with 600 square feet of that used as storage. What this forces us to do is practice good rotation, which in turn decreases shrink and increases freshness.”

Getting produce into the airport entails well-oiled logistics.

“No airport has the same set of rules. In general, each vendor needs to have insurance specific to delivering to an airport, with personnel badged and cleared through security. It doesn’t matter if it’s bags of potato chips or fresh strawberries, everything goes through a scanner. Not whole pallets, but case by case. We schedule six produce deliveries a week, and seven or daily deliveries in some instances. We try to consolidate through one supplier. There are only certain hours deliveries are accepted. After all, you can’t have a produce delivery holding up a flight,” says Concessions International’s Mortenson.