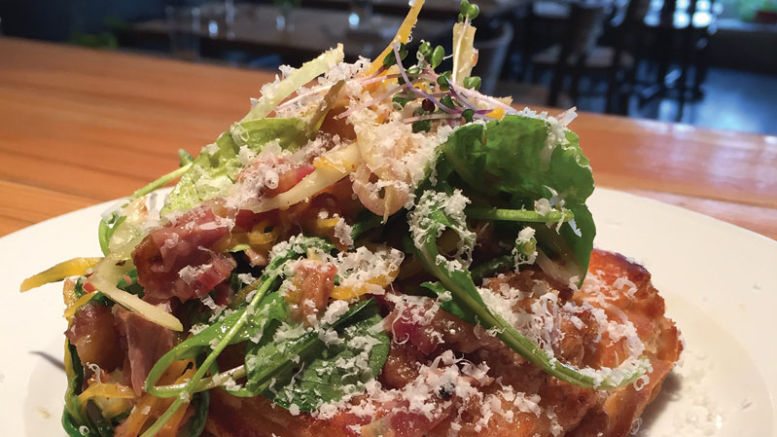 The city of nearly 100 neighborhoods offers food experiences for everyone.

Indianapolis provides visitors and locals with a variety of dining options. There’s the unique brunch-only concept of Milktooth, which operates in the 2,800-square-foot space of a former auto shop. The Milktooth motto is breakfast isn’t just the most important meal of the day, it’s the only meal. Bon Appetite thought highly enough of this brunch spot to grant it “Best New Restaurant” honors in 2015. 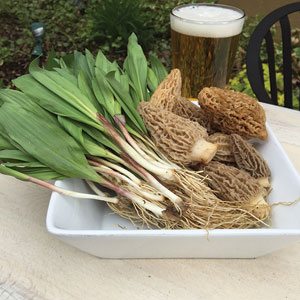 The hand-crafted pizza of Bazbeaux has earned this Indy institution many “Best Pizza in Town” accolades. The pizzeria’s legions of loyal customers have supported the original location in the Broad Ripple neighborhood since 1986, and newer spots have since opened downtown and in suburban Carmel.

Shapiro’s Delicatessen is keeping the Jewish deli experience alive, even as delis disappear from the Midwest’s restaurant landscape. The staff has been yelling out orders at customers since 1905, and the eatery remains an integral part of the city’s lively cultural history.

The farm-to-table concept has made its presence felt in the city as well. Located in the historic Lockerbie Square neighborhood, Vida takes the concept one step further with its wall-to-table sourcing, courtesy of an indoor hydroponic grow wall. Here, chefs can harvest herbs and other plants to be used in dishes almost instantly.

On the near south side of Indianapolis, you’ll find the historic Holy Rosary-Danish Church Historic District. Once an enclave of European immigrants who settled the city in the 19th century, descendants of many Italian families can still be found here. A mix of newer arrivals helps honor old traditions like the Italian street festival, which creates a sense community that has existed in the neighborhood for generations.

Virginia Avenue cuts diagonally through the District, connecting it to the Fountain Square neighborhood to the southeast and Mile Square to the northwest. It is on Virginia Avenue where you’ll find the renovated factory warehouse that is home to the farm-to-table concept Bluebeard and the European-style artisan bread shop, Amelia’s.

Living in the heart of a state with such a rich agricultural tradition has helped Indianapolis residents embrace Bluebeard’s always changing, locally sourced menu. “Farm-to-table is a part of our concept and it’s a part of our marketing strategy, but people taste the difference and they feel different,” says co-owner Eddie Battista. “There really is a difference between a corporate place that has centralized packaging and production and who are just warming the stuff up. There’s a big difference between hot house tomatoes and regular tomatoes, and fresh handmade pasta versus boxed pasta. All those little details really make our dishes unique.”

Battista knows fresh, seasonal ingredients are the key to good cooking, even though he didn’t emerge from the culinary world. “I have a law background,” he says. “I came across a liquor license by showing up at an auction on a whim.”

Battista and longtime friend and Chef Abbi Merriss helped develop the idea for the restaurant. Battista’s father came in as a partner. Originally, the plan was only to open Amelia’s, the artisan bakery, but that idea evolved by happenstance. “I had a liquor license, and I had a building that was bigger than I needed for a bakery. We were already doing a buildout, so it all fell together perfectly,” says Battista, who’s background in law kept him focused on facilitating the business side, leaving Merriss free to concentrate on menu creation.

The local ingredients help Chef Merriss create what Battista describes as American fusion with Mediterranean influences. “Because we’re in a historic Italian neighborhood, we have a lot of fish on the menu that we can’t get locally, but when it comes to most of our protein that has legs, it’s all sourced in Indiana.”

Bluebeard isn’t just the customer of local farmers; those farmers are Bluebeard’s customers as well. “A lot of the farmers are our age. We went to high school with them and now they’ve gotten into urban farming and suburban small plot farming,” says Battista. 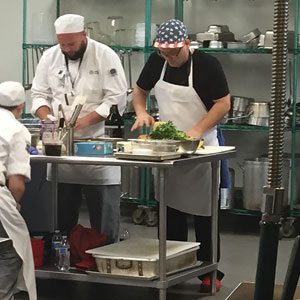 Since the menu changes daily, Bluebeard relies on the input of its grower friends to plan the menu. “We ask our farmers what’s in season, what’s going to be the best right now? We base our menu around what is fresh and what is available. A lot of restaurants have a static menu; they’re at the will of nature, or the hot house, for what kind of produce they’re ordering. We’re very agile and flexible, and we’d rather work with what’s great right now than try to make things work that are out of season.”

Toward these ends the kitchen takes advantage of Indiana tomatoes and other seasonal, local delicacies. “We like doing an heirloom tomato plate that’s lightly dressed and lets the tomatoes showcase themselves. Wild ramps are really killer, but there’s a short period where ramps come up,” says Battista.

While fresh and local are vital to the concept, Bluebeard also obtains products through a local wholesaler. “We use Piazza for the mainstay stuff — that consistent onion and basil, things like that; but when it comes to Indiana tomatoes, for example, we get those from our local purveyors. Our back office is really obnoxious because we handle 30 to 40 invoices a day.”

While Amelia’s does sell an assortment of artisan breads, someday that may expand to include produce, too. “We have a small storefront for Amelia’s,” says Battista. “We do want to do some produce, but we really haven’t tested those waters yet.”