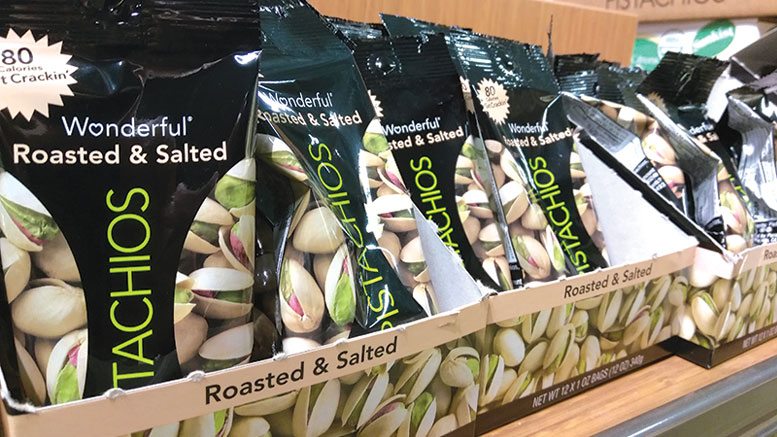 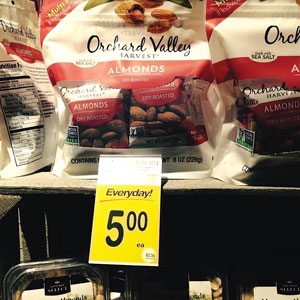 Packaged nuts used to be known for their high fat and caloric content, shunned by dieters fearful of gaining weight. But in recent years, as “good fats” have been added to the American diet, more and more consumers are purchasing nuts. Often less processed than chips, cookies and cereal bars, nuts can be a healthy snack loaded with protein instead of carbohydrates. They’ve also found a home in the produce section of the grocery store where consumers are most interested in fresh, less-processed foods and want transparency on ingredient labels.

“You have to play off what consumers expect in produce — clean, fresh, local, non-GMO ingredients,” says Chris Gardier, senior vice president of sales at John B. Sanfilippo & Son, Inc., owner of Orchard Valley Harvest in Elgin, IL. Gardier says consumers are concerned about the ingredients in the foods they eat. Orchard Valley Harvest and other packaged nut producers are changing the face of the packaged nut market with a number of innovative new products and merchandising ideas. Retailers can take advantage of the trend by displaying mixed nuts prominently in produce sections. Here’s how:

Orchard Valley Harvest recently introduced a line of salad toppers made with cleaner, fresh ingredients. Fresher salad toppers such as its Sliced Almonds and Cranberries and Honey Roasted Almonds fill a need in the marketplace because salad toppers formerly placed near the lettuce and salad bar, for example, were made with unhealthy ingredients such as artificial colors, flavors and added sweeteners that tended to turn off the health conscious consumer. Salad toppers are also appealing in the produce section because they’re much more likely to inspire impulse purchases.

“Salty snacks are always impulse buys; it’s always best to place them next to items in produce that make the consumer’s grocery list, like lettuce and fresh salad dressings,” says Gardier.

2. Give the consumer ideas for how to use mixed nuts.

According to Michelle Mayhew, producer director for Dorothy Lane Market, with three gourmet supermarkets in Dayton, OH, inspiring impulse purchases is about giving consumers ideas for how to use the product.

“Add walnuts to a display along with bananas to inspire consumers to make banana bread,” says Mayhew. “It’s all about cross merchandising. We like to put pine nuts with basil or pecans with sweet potatoes so customers don’t have to think so much.” 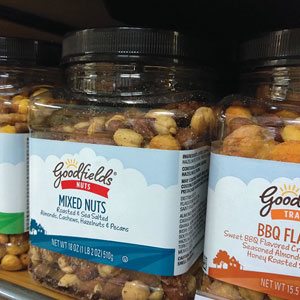 “We are also seeing nuts flavored with pepper and sweet, wasabi and buffalo flavors to meet the needs of consumers,” says Hartman. While consumers are less likely to reach for potato chips than they might have been in the past, they’re still excited about bold new flavors, adds Hartman.

Consumers need to be inspired to try new varieties. Putting trendy spice combinations on special or advertising them on social media inspires purchases. Placing them front and center on display cases in produce is also helpful.

4. Place near other grab-and-go items in produce.

Snack-sized packaging is by far the most important trend in packaging. Although consumers are more enthusiastic about healthy fats, they still want to eat them in moderation.

“From a packaging standpoint, we are an on-the-go society. Packages are resealable, becoming smaller in size, and labeling is becoming clean and clear,” says Hartman. “Consumers are picking items that are very clearly labeled and marketed. Promoting healthy or dietary attributes on both packaging and signage is becoming very trendy and welcomed by the consumer.”

According to Hartman, many busy consumers no longer sit down to a big lunch. Rather, they’re more interested in a nutrient dense grab-and-go snack. Placing snack-sized packaging near grab-and-go fruits such as apples, oranges and the biggest produce seller, bananas, is sure to boost sales.

“The big change has come from the snack/meal replacement shopper. Healthy consumers are realizing they can get all the nutrients and calories they need from a package of nuts, rather than heading to the full midday meal,” says Hartman. “Keep in mind, as you look at the consumer, the overwhelming trend that encompasses all shoppers is bold flavors, grab-and-go and health, trend areas that nuts fit into naturally.”

Orchard Valley’s salad toppers come in eight, .85 ounce packages that are perfect for the health-conscious consumer to bring to work and top their salad with daily. “Snacking products are the foundation of our business,” says Gardier. “We have 11 varieties of nut mixes that fall into one of three categories: wellness, indulgent and core snacking. Consumers want clean, simple and portable snacks.” 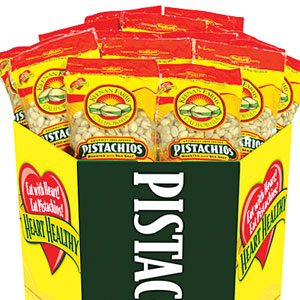 Keenan Farms, Avenal, CA, has seen a lot of success packaging its pistachios in stand-up, gusseted bags to display its Sea Salt, Chili Lime and Salt and Pepper gourmet products in the produce section, according to Paul Huckabay, vice president of sales.

“The stand-up, resealable bags provide good visibility for our product,” says Huckabay. “Pistachio packaging has evolved from just being available in the bulk section to consumer packaging.”

This evolution also has happened as pistachios have become more widely available in the produce section, says Huckabay.

“We want our consumers to know that our pistachios are heart healthy, a good source of fiber and cholesterol-free,” says Huckabay.

The one barrier to entry when it comes to packaged nuts is the cost. “We have a more expensive product, says Huckabay. “That’s why it’s important to communicate value to customers.”

Keenan Farms sells 1-pound bags that do really well because customers buy them with the idea that they’ll last for a while. Two-pound bags are also popular, especially during the holidays when large groups get together and snack on pistachios.

Chad Hartman of Truly Good Foods says customers are willing to pay for value, so it’s important to provide it.

“The key piece to any package is value. If consumers are looking for a grab-and-go nut pick-me-up, they will grab a pack that is $.99-$1.99,” says Hartman.

Gardier says Orchard Valley Harvest does line pricing, meaning all items are priced the same within each category so consumers can bounce around and try a number of different products. The magic numbers are between $4.99 and $6.99, depending on the line of products.

No matter the season, consumers are flocking to packaged nuts more than ever as the flavors, nutritional makeup and packaging modernize to meet their needs.