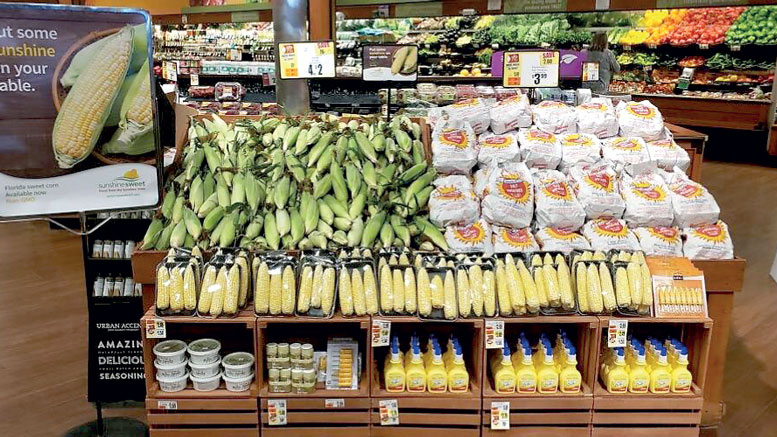 Nothing says summer like sweet corn, and just about every retailer carries tray pack of sweet corn for convenience, although husk-on whole ears are still a favorite with many shoppers.
PHOTO COURTESY FLORIDA FRUIT AND VEGETABLE ASSOCIATION

Promote the summer holidays and seasonal gatherings to get your fruit and vegetable sales sizzling.

Meteorologically, summer includes the months of June, July and August. Astronomically, this warm weather season starts June 21 and ends Sept. 22. However, for many Americans, Memorial Day weekend at the end of May is the official kickoff to summer and Labor Day in early September marks the last hurrah.

No matter how summer is defined, it’s hands-down the best time to sell domestically grown fruits and vegetables in the produce department. Holidays make great themes to build special displays and advertise just-picked produce. This season is also full of occasions that are ripe for themed produce promotions.

“The summer holidays are always a fun time to try to do something special with our displays, as we can expect to have a surge in business with specific items leading up to each holiday,” says Earl McGrath, produce director for Freshfields Farm, in Orlando, FL, which operates a second location in Jacksonville, FL. “In general, we focus on complementary produce items that will work well for outdoor parties and gatherings.”

BRING ON THE VEGGIES

Sweet corn is a big seller for at Sunset Foods, a five-store chain based in Highland Park, IL. “We carry corn year-round, but the sales velocity isn’t as strong in the winter as it is in the summer. The minute it starts to get warm, corn sales increase and we open more display space for it,” says Vince Mastromauro Jr., director of produce operations.

Corn is easily the top vegetable for all summer holidays, adds Freshfields Farm’s McGrath. “Depending on current market pricing, we offer at least three options with our corn during the summer holidays. Our top seller is a tray with the corn already cut. We offer that typically in a pack of four or five ears, and then in a larger pack of seven to 11 ears. The size of the pack is variable based on cost and retail pricing. During the three major summer holidays, we add another SKU that is five to eight ears in a mesh bag with the husks still on.”

Club stores want tray packs with seven, eight, or more ears, adds Stewart Mann, general manager for Pioneer Growers, in Belle Glade, FL. “We talk with our regular retailers about the advantages of putting these bigger packs on the shelf for Fourth of July push.”

Bi-color or white and yellow, corn is the most popular, especially in the Northeast, according to John Alger, manager of Alger Farms Inc., in Homestead, FL. “In the South, the preference is mostly for yellow corn.”

For something different, retailers can merchandise Wild Violet corn, with its distinctive purple and white kernels, along with yellow, white and bicolor. Hugh H. Branch Inc. offers a small volume of this variety from May to August, says Brett Bergmann, owner of the South Bay, FL-based company. “We have five acres of the Wild Violet planted and sell it in tray packs.”

Potatoes and cabbage are staples promoted throughout the summer at Freshfields Farm. “These two items are popular for making salads,” says McGrath.

New crop organic red and golden potatoes in 3- and 5-pound bags and organic yellow and red onions in 2- and 3-pound bags will be available under Bakersfield, CA-based Grimmway Farms’ Cal-Organic brand.

“We’ve been moving to a 52-week organic potato program and it’s exciting to offer a new crop in the spring. Signage on displays and in ads that say, ‘new crop’ sparks sales,” says Bob Borda, vice president, Cal-Organic Farms Sales.

“Retailers can spotlight the popularity of air fryers for cooking potatoes as well as carrots. Air frying is faster than roasting, and the potato fries or carrot fries are a terrific addition to summer barbecues.”

June
These special occasions are a wonderful time for two types of promotion. First, position everyday fruits and vegetables for use in out-of-the-box ways. Second, show customers how to have fun with seasonal specialty produce.

June 19
Like Memorial Day, grilling is a tradition for Father’s Day.

Any vegetable that is popular to grill, such as zucchini, eggplant, squash or mushrooms, should increase in display size during this and other summer holidays, says Freshfields Farm’s McGrath. “You always want to make sure you have a nice tomato that is ready to slice for burgers and sandwiches.”

Also in mid-June, “the stone fruit sizing is getting bigger by now and we’re starting into California cherries, so there is more to offer,” says Sunset Foods’ Mastromauro.

July 4
Blueberries, watermelon, cherries and stone fruit are top fruits for this patriotic occasion and into July. Of note is that July is National Blueberry Month.

“Blueberries are our best-selling summer berries, and Fourth of July, when the Michigan blueberry season starts, is one of our biggest holidays for berries,” says Ryan Lockman, vice president of sales and procurement for North Bay Produce, in Traverse City, MI. “When nature gives us a plentiful Michigan harvest, we can partner with our customers to offer the inventory and promotions for big, beautiful front-of-store displays adding to the red, white and blue theme, and make their produce department pop.”

Lockman adds the company will offer top seal as well as all other mainline clamshell packs.

Greater volumes of organic blueberries will be available this season from Frank Donio Inc., in Hammonton, NJ. The company sells its blueberries under the Top Crop brand, as well as organic cucumbers, peppers, eggplant and green and yellow summer squash. The increase in supply comes on the heels of the company purchasing an additional 600-acre farm that has fully transitioned to organic certification.

Frank Donio is now the largest regenerative farm in NJ, and this fact is called out on product labeling with a QR code. Organically grown vegetables such as sweet corn, tomatoes, bell peppers, squash, cucumbers and eggplant are available this season, and the company is planting new varieties of blueberries organically on this land for increased availability.

“Mega organic blueberries, and organically grown vegetables — the market is calling, and we are answering,” says Arena.

Watermelons are huge when it comes to building an exciting display for the Fourth of July.

“We will pile up many bins of seeded and seedless watermelons to greet folks as they enter the store. When cantaloupes and honeydews are tasting great, we will have them in the mix as well. It’s also important to have significant displays of ready-to-eat melons in your cold case, as not everyone wants to cut up their fruit,” says Freshfields Farm’s McGrath.

A 45-count size watermelon is the No. 1 seller and makes up about 55% of the harvested crop for the season, according to Scott McDulin, vice president of marketing and retail sales at Schmieding Produce, a division of Woerner Holdings Inc. in West Palm Beach, FL. However, he adds, some retailers like to offer 60-count as well for a better price point. “Seedless is most of the crop, but there are pockets of locations in the summer in the South that prefer seeded and 35-count.”

Cherries and peaches are other fruits that should be abundantly displayed this time of year, says McGrath.

“The Fourth of July is a key time for Washington cherry promotions, but the entire month of July is great for cherry promotions, if the timing and crop volumes align with that plan,” says Brianna Shales, marketing director for Stemilt Growers, in Wenatchee, WA. Rainier cherries are highly promoted on July 11, National Rainier Cherry Day.

For stone fruit, apricots run from mid-June through July, Shales says, then Stemilt starts organic peaches and nectarines in mid-July, running through mid-September. “It’s all about building a great display for cherries and stone fruit, having ideal store placement, and driving impulse purchases through amazing qualities. If the eating experience delivers, shoppers will come back for more.”

July and August
Locally grown is a big selling point for many shoppers. Plus, there are still produce items today that are truly seasonal in their availability. Summer is the prime time to capitalize on this demand.

For example, Sunset Foods partners with a local grower to offer bi-color Mirai sweet corn for a three-week window in July into August. “It’s grown from a proprietary seed; it’s a premium product and we sell it in three- and six-packs,” says Mastromauro. “Last year, we were only able to get 600 ears. We’ll let customers know via social media and they flock in.”

Local tomatoes are a big deal from July through October in the Midwest, says Rocky Ray, vice president of tomato packers, Ray & Mascari, in Indianapolis, IN. “We start with Kentucky, then Michigan, Ohio, Indiana and Illinois. We’ve really seen retailers looking more for local in the last eight years. Local deals also help with freight and shelf life.”

Stemilt Growers is celebrating the 10th anniversary of its A Half Mile Closer to the Moon cherries. These are fruit that is harvested in mid-August from high-altitude orchards located 2,640 feet above sea level and higher.

“These cherries make the perfect finale to cherry season and have such a unique storytelling component around the grower and locale they come from,” says Shales.

Hatch Chile season is August and September, says Melissa’s Schueller. “This is a prized variety of a mild pepper that only grows in the Hatch Valley in New Mexico, north of Las Cruces. We partner with retailers to host Hatch Chile roastings at their stores. Once roasted, the chilies can be frozen and enjoyed throughout the year.”

September 5
This early September holiday marks the peak availability of summer produce in many areas.

“It’s the last push of summer and we do a big Labor Day ad with things like stone fruit and corn, as well as early apples for back to school,” says Mastromauro.

Since sweet corn is now available year-round, use the Labor Day holiday to kick off usage ideas beyond grilling, recommend Tori Rumenik, commodity services and supply chain manager for the Florida Fruit & Vegetable Association, in Maitland, FL. “We’ll be using money from a U.S. Department of Agriculture (USDA) Specialty Crop Block Grant to focus on influencers and recipes for customers to enjoy Sunshine Sweet Corn for a longer time during the year.” 