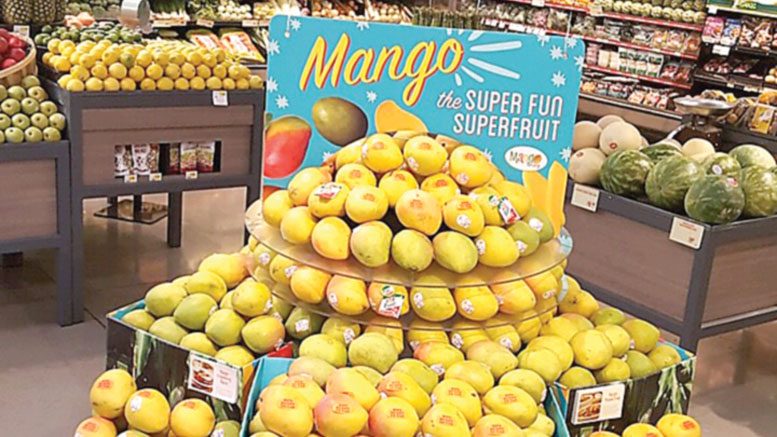 An opportunity and a challenge.

Though mangos are the most heavily consumed fruit in the world, in the US and Canada, this nutritious tropical fruit is still on the way up, as growth continues at an impressive pace: Per capita consumption doubled every six years from 1970 to 2010, according to U.S. Department of Agriculture statistics, and since has continued to show near double-digit annual increases.

Such sustained growth represents both a tremendous opportunity for retailers and a challenge because consumers include both large numbers of Latinos and Asians, who are largely familiar with mangos, and other potential customers who are just learning.

Results of the Orlando, FL-based National Mango Board 2017 consumer survey suggests that lack of familiarity is the main obstacle for people who are not already buying mangos.

“The top two reasons that non-purchasers do not buy mangos remain the same, but they have swapped position,” the board reports. “In 2013, the leading reason for not buying a mango was not thinking about them — 35%; this year that same reason is second at 29%. In 2017, the leading reason was not knowing how to select a ripe mango at 31%.”

Retailers, shippers and the Mango Board are apparently spreading the word well because the share of consumers purchasing mangos rose in the short four years between the 2013 and 2017 surveys from 60% to 67%.

“One of our overarching goals is to work with the industry and our retail partners to ensure that the product the consumer receives is of the best quality possible,” says Tammy Wiard, retail marketing manager at the National Mango Board. “We do this through education to our partners on temperature management and best practices for ripening. The board has online training guides customized for the warehouse team, store teams and corporate management. We also have an outside consultant who speaks with many of our retail partners regarding the ‘science side’ of ripening mangos.”

One important piece of advice in cultivating new consumers is to make sure their first mango experience is a sweet one.

“The riper a retailer can have the mangos, the happier consumers will be,” says Chris Ciruli, COO at Ciruli Brothers, Tubac, AZ. “If you can give new consumers sweeter mangos, they will come back.”

While a little show and tell at the retail level will help bring new consumers to mangos, sales should also increase because the core consumers are growing in numbers.

“The Latin population is increasing in the US, and that’s a big part of the growth,” says Jeff Friedman, president of CarbAmericas, Pompano Beach, FL. “As of two or three years ago, mangos overtook bananas for consumption worldwide; I don’t think people are going to stop eating mangos.”

WHEN ARE THEY PROMOTABLE?

One challenging aspect of merchandising mangos is that while they are available year-round, they are not always available in promotable volumes.

“Mangos have become a staple item,” says Friedman. “The category has become mature, but there isn’t enough supply many months of the year. There is no increase at retail in the early spring because of the lack of supply. Peru is slowly ending in early March, and Mexico is not in full swing. Guatemala and Costa Rica are doing a little. By late March, there is more from Mexico, Guatemala and Costa Rica.”

Friedman believes a hallmark of a good mango program is anticipating when there will be opportunities to promote.

“Smart retailers are also looking for times when the volume lets you put them on promotion,” he says.

The one time you cannot come up short is in early May with the holiday that is to mango sales what Thanksgiving is to sweet potatoes.

Once a supply for Cinco de Mayo and other promotions has been lined up, the question becomes where and how to set up the display.

WHERE SHOULD THEY BE DISPLAYED?

The answer to this question is worth a little time and imagination because mangos, like hard squash, hold up well under a wide range of temperatures.

“Retailers are adding displays in front of the produce department,” says Wiard. “Additionally, mango bins offered through the mango board have gained a lot of retailer excitement and engagement, particularly with this year’s opportunity to have seasonal headers to use with the display bins. Versions with the grilling, tailgating, back to school and fourth quarter holiday messaging allow retailers to customize their displays. We will distribute thousands of bins this year to many of our retail partners.”

The many possible uses of mangos means they can be effectively displayed with many different produce items.

“Themed mango displays are always a big hit,” says Wiard. “For example, choose a mango board recipe and ask your employees to group the ingredients in store. This will help shoppers pick up everything they need for the recipe — a great meal solution for the family on the go. While it sounds simple, this strategy leads to colorful displays that draw in shoppers by telling a story and offering a solution.”

As promotion times approach, it is worth considering a small secondary bin as close as possible to the cash registers.

“A prominent large display right in front of the produce department is optimal,” says Ronnie Cohen, principal of Vision Import Group, River Edge, NJ. “But it’s also every produce supplier’s dream to have a stand-alone or strategic display on the checkout line.”

If the checkout line is already spoken for, there are many other locations that work well for secondary displays.

“Mangos can be stored at ambient temperatures, and we’re always trying to get people to display them beyond produce, like in the fish department, deli or liquor department,” says Ciruli.

One school of thought is the main display within produce is likely best located near the other tropical fruits.

“Mangos are in the tropical section with pineapples, limes or lemons, or they are on a big end cap,” says Friedman of CarbAmericas.

Because they are available year-round, however, mangos can be moved to different locations within produce, depending on the season.

“In the summer, mango sales thrive when they are adjacent to stone fruit,” says Wiard. “As our retail partners switch their produce sets from summer to fall, sometimes it is a challenge determining where to put mangos. Our recommendation for the fall/winter is to place mangos with citrus. It is important to keep mangos in a highly visible area in the produce section. Mangos are mainstream fruit and are available year-round. They need a permanent home where consumers can consistently find them.”

Once the relative importance of familiarity and proximity to seasonal companion fruits has been resolved, attention can return to the many opportunities for secondary displays.

“Fall tailgating and grilling are food occasions where mangos have been underutilized,” advises Wiard. “Mangos add a tasty and colorful addition to holiday meals and desserts. Secondary displays outside of the produce department are a way to generate awareness and trial of mangos. Consider grouping the mangos by size and or ripeness. This gives the consumer additional options based on their purchase need.”

The optimal number of SKUs begins with the number of varieties, but it does not end there because fresh-cut mangos are becoming more important.

“Typically, a chain store would have two varieties,” says Ciruli. “A specialty or ethnic store might have four or five varieties. It depends on what kind of store you have.”

Which varieties to display, and maybe even how many, can change as the harvest shifts from country to country.

“The available mango varieties shift as the crop moves through each growing country and region,” says Wiard. “This natural flow means that consumers will be exposed to different varieties throughout the year. The top six commercialized mango varieties in the market are Honey, Francis, Haden, Keitt, Kent and Tommy Atkins.”

The Mango Board offers online descriptions of the seven most important varieties and a calendar of their availability.

“Variety, which is impacted by seasonality combined with promotable volumes, translates to more or less sales,” says Vision Import’s Cohen. “An example is the Australian mangos, which mostly enter market on the West Coast via air and, due to logistics and higher-end consumers this caters to, limits marketability. In contrast is Mexico with its proximity to the US; during Mexico’s peak season, which starts in June and goes through August, the market can really provide tremendous promotable volumes at their peaks. The varieties during this time are Kents and Honey, or Ataulfos, then transitions to Keitts toward the end of the season.”

As the market for mangos expands, so does the search for the next big thing in varieties.

The one new variety that looks to have broken into the mainstream is the Palmer from Brazil.

“The past few years, the Palmer has tried to expand the varietal offering, but that is the only one in recent history,” says Cohen. “I do know there will be new varieties that will develop, but this will take time and years as the mango industry evolves and matures. The other varieties that have been received are Honey Gold, Kensington Pride, R2E2 and Calypso, produced in Australia. These are great additions, but seasons are short and overall volumes are limited. This makes it difficult to market and grow for mainstream consumers. The logistics is the biggest challenge and impacts the retail price, which limits consumers due to high cost.”

As mangos go more mainstream, the trend toward organics could grow, even though it may currently be a small market.

“Organics, like many other produce items, are growing in demand, and I see the industry slowly transitioning conventional farms into organic ones; this helps the overall growth of the mango category,” says Cohen.

But the new product that has already captured a market is the conveniently-packaged fresh-cut ripe mangos.

Among customers who already purchase mangos, most of the growth in sales comes from these fresh-cut products.