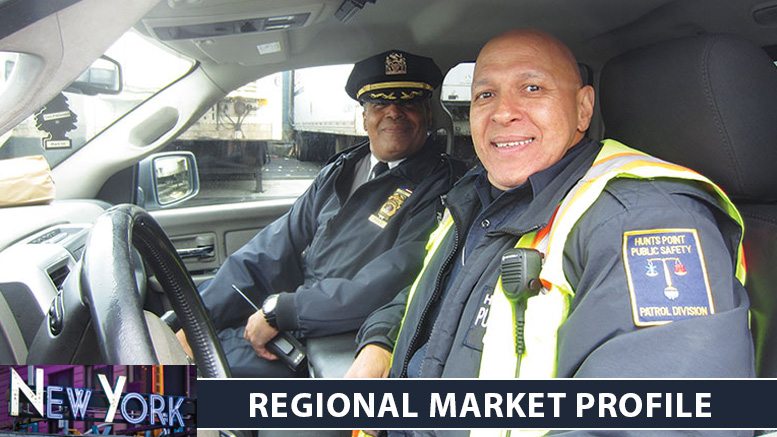 In June, members of the Hunts Point Terminal Produce Co-Operative Association Inc. hosted a presentation by NYPD Shield, a public-private partnership dedicated to fighting terrorism. The division’s mission is “countering terrorism through information sharing” — if you see something, say something.

New York City Police Commissioner James P. O’Neill, writing on the Shield website, explains, “New York City remains a top terrorism target by organized groups, so-called ‘lone wolves,’ and more. At least one stated desire of those who wish to do us harm is to cripple our economy. Because many world-class financial institutions are based here, we can never become complacent.

“We have long known that in order to safeguard our city and our nation, we had to find new and effective means of sharing vital information with the private sector. No police department in the world is better positioned than the NYPD to face that fight head-on. But thwarting terrorism — like crime, itself — is a shared responsibility between the police and the communities we serve. We want you to help us keep everyone safe by maintaining a watchful eye for anything suspicious — because you know your buildings and your immediate neighborhoods better than anyone.”

The speaker shared the following information:

NYPD Shield addresses private sector business on both an industry-specific and a geographic basis. This enables the Department to best serve the unique needs of each constituency. NYPD Shield provides training to assist public and private sector entities in defending against terrorism. Information is researched and transmitted directly to our members by one of several methods:

The NYPD Shield program is a two-way street. The key to success is for information to flow in two directions. Private sector personnel serve as the eyes and ears of the Department and are a force multiplier in the fight against terrorism by reporting suspicious behavior as soon as possible.

In addition, the Department recognizes that its private sector partners are uniquely qualified to assist NYPD personnel during counter-terrorism deployments. Private sector personnel know the buildings, blocks and neighborhoods from a different perspective. Citizens know what belongs and what is out of place. The NYPD Shield program urges staff to speak with the police officers on the street, particularly those assigned to posts in the vicinity of sensitive and critical locations. Sharing can help the program be more effective.