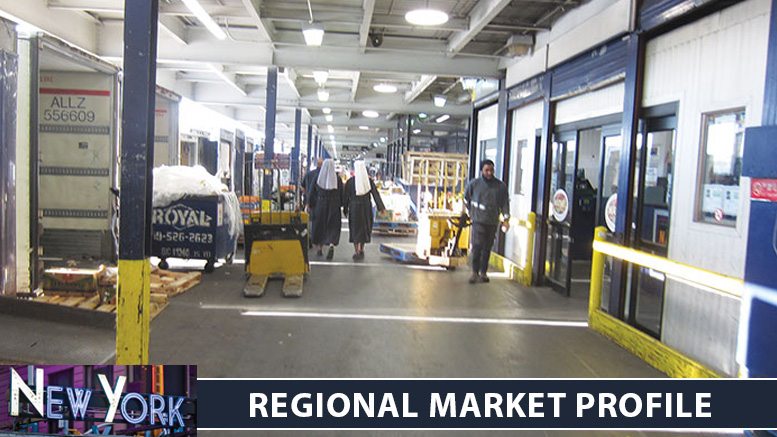 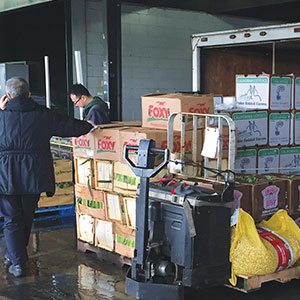 Produce is loaded up at Hunt’s Point Terminal Market to feed the New York metropolitan area and beyond.

Each day, the Hunts Point Terminal Market receives trucks from shippers all over the country. Such shippers report the marketplace remains a crucial outlet for them, whether they’re local or on the other side of the country.

Though the New York Apple Association (NYAA) in Fishers, NY, emphasizes a “buy local” message for all customers east of the Mississippi, New York City represents a particularly attractive market. “We’ve got top quality and great variety right in the customers’ backyard — and the latter is especially true for New York,” says Cynthia Haskins, NYAA president and chief executive. “While all our industry’s markets are important, shipping and marketing to the New York area is particularly so. New York City is the country’s largest consumer market, and it is right out our back door.”

GPOD of Idaho in Shelley, ID, has been shipping potatoes to the Hunts Point Terminal Market area for 49 years. “New York state has been a huge supporter of our GPOD label and Idaho potatoes,” says Kevin Searle, general manager. “As a supplier of the original heirloom Idaho Russet Burbank variety, we are proud to assist New York chefs and the consumers alike in enjoying our potatoes.”

When Amazon Produce Network of Vineland, NJ, first started to import Brazilian mangos in 2000, New York was its main focus. “The wholesalers at the Hunts Point Market were accessible to us and willing to establish relationships with new vendors,” says Greg Golden, co-owner. “They were always quick to give you feedback on quality and market.”

Ande Manos, marketing manager/business development for Babé Farms Specialties in Santa Maria, CA, says New York’s importance is due to its high energy, high volume and constant need of resupply. “Being a culinary hub, New York City demands more Babé Farms product than anywhere else in the United States, aside from Los Angeles,” she says.

New York may well be the most diverse buyer and consumer market in the country, according to Haskins. “The New York state apple industry is uniquely suited to meet the market’s diverse needs because of both our proximity and the wide variety of high-quality apples, cider and processed apple products our industry produces. That’s one of the reasons why our shippers and our association alike have long enjoyed strong support from New York buyers, large and small.”

Given New York has a market for everything, Golden believes its wholesalers can move almost anything. “There are customers for almost every variety, size, quality and condition of fruit,” he says. “It is a matter of finding a buyer and the price he is willing to pay; but the buyers are there buying out of the market every single day.”

Searle considers New York City and the surrounding area as one of the most populated and ethnically diverse regions in the United States. “Because of this diversity, the options for creative culinary dishes using potatoes is endless,” he says. “The vast array of dishes using potatoes speaks to the imagination of the best chefs at many of the world’s best restaurants.”

New York City provides especially fertile ground for Babé Farms product. “New York City is the pulse of our culinary world, the proving ground for fine dining chefs,” says Manos. “The tools of the trade are not just in the kitchen, but all the specialty foods needed to create art on the plate. Babé Farms’ specialty vegetables are staples of the fine dining industry; having a presence in the New York marketplace is crucial to our business.”

Suppliers also know the New York market counts on them. “The New York apple industry is a strategically important supplier to New York buyers,” says Haskins. “We know retailers and other buyers across New York are proud to offer their customers New York apples and cider for their superior quality and taste; that doesn’t get any more local than we do. Plus, we can ship virtually year-round. That’s a win-win relationship for everyone.” 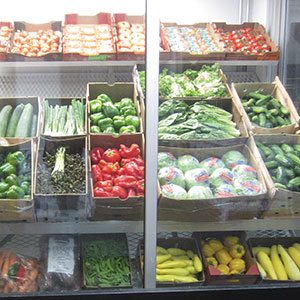 The Hunts Point Terminal Market receives produce from all over the country on a daily basis.

As the country’s largest wholesale produce market, Hunts Point offers many benefits to shippers. “Hunts Point not only services a diverse range of New York state outlets — including retailers, wholesalers, foodservice distributors and restaurants — it also ships around the country,” says Haskins. “Hunts Point is a great bridge for our apple shippers who want to distribute their fruit as close as our own state and as far away as Florida, Texas, throughout the Midwest and even to the West Coast.”

Amazon’s Golden sees Hunts Point as the most pure example of open market competition. “There are dozens of vendors with competing products displayed out on the platforms and innumerable buyers shopping and comparing price, quality and service,” he says. “It is important to have your product in this market to know how you stack up to the competition.”

Within this competitive environment, GPOD’s Searle says Hunts Point has established itself as an elite wholesale marketplace. “This is true for every commodity buyer, regardless if they are a one man show, supermarket chain or five-star restaurant,” he says. “The houses on the market have weathered every storm and continue to be the ‘go-to’ market for the finest in fruits and vegetables.”

A key benefit of sending product to Hunts Point Terminal Market is its obvious location. “Located in the heart of New York, Hunts Point allows Babé Farms to efficiently distribute our specialty vegetables to high-end restaurants throughout the area,” says Manos. “New York’s staggering population is a great advantage. The possibilities are endless when it comes to specialty vegetables and having the opportunity to showcase our products to so many of New York’s finest is of the utmost importance.”

“Hunts Point helps New York apple growers service our school accounts, which are an important market for our industry.”

Suppliers credit Hunts Point Terminal Market for an intrinsic understanding of customers and their needs, going back many generations. “Many of the receivers we ship to at the Hunts Point Market are family owned and operated, second- and third-generation businesses,” says Searle. “The produce business runs in their genes and they are strongly and devoutly devoted to the success of those they serve in the restaurant and retail trades.”

Searle notes how New York’s particular characteristics have supported and prospered Hunts Point. “Perhaps the biggest difference between Hunts Point and other terminals is in the complexity and size of the market,” he says. “Whereas other wholesale terminal markets have struggled to maintain a presence and a viable position, Hunts Point is a living, vibrant, durable working environment that operates on a scale of service second to none.” 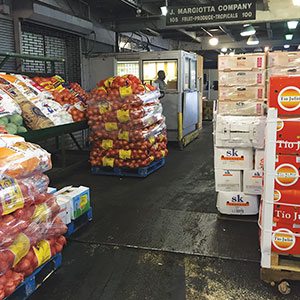 Hunts Point provides strong support for its suppliers in helping them develop their markets and customers. “Hunts Point is important to the New York state apple industry because it helps our shippers reach a broad range of customers, from retail to foodservice to schools,” says Haskins. “Hunts Point helps New York apple growers service our school accounts, which are an important market for our industry. Not only are schools valuable buyers, but today’s students are tomorrow’s consumer buyers.”

NYAA coordinates several buyer programs in New York, counting on Hunts Point to back them up. “We lean on participating markets on the terminal and distributors throughout the state to supply New York state apples for those programs,” says Haskins.

GPOD of Idaho places great emphasis on the relationships established during its years of partnering with Hunts Point wholesalers. “They are reliable and we are appreciative of the longevity of the relationships cultivated over the decades,” says Searle. “They have been willing to promote our product and assist us in making our growers’ potatoes the most requested potato label in New York. We believe personal customer relationships, established over the many years of doing business through all extremes, are of significant importance to an ongoing healthy alliance.”

The outreach of Hunts Point to support food banks and other charities in the region is also esteemed by its suppliers. “The business houses at the market are very generous, donating millions of pounds of produce to the food banks and City Harvest of New York,” says Searle. “Additionally, there are many philanthropic efforts that are contributed to on an ongoing basis. These are the kind of people we prefer to do business with — those who see and participate outside the walls of just doing commercial deals.”

Learn more about the wholesale logistics behind these major hubs.

The Secret to Success With Organics