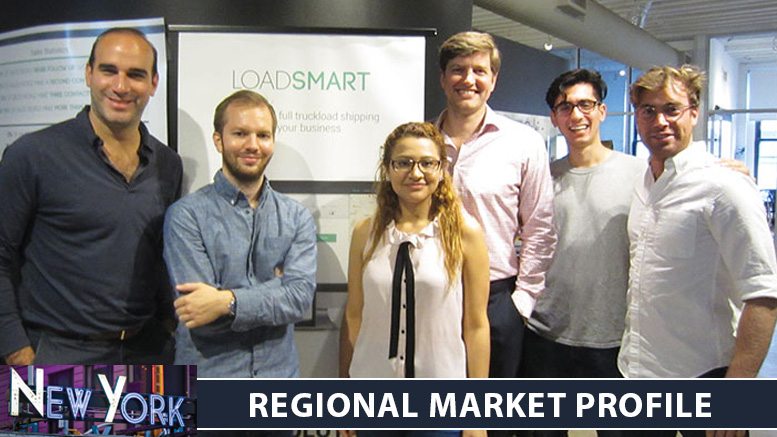 Technology leads the way by ‘upending the existing paradigm.’ 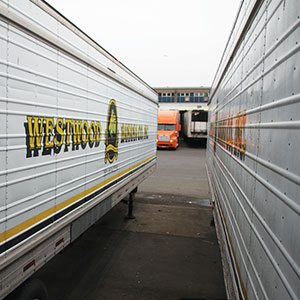 As technology continues to disrupt business landscapes, the transportation companies that serve the Hunts Point Produce Market are shaping their futures to remain viable and essential ahead of seismic shifts.

Loadsmart, a New York City-based logistics technology company specializing in full truckload shipping, is looking toward a future based on data, artificial intelligence, and automation of load movements, according to Nick Jensen, strategic sales executive.

“We are reimagining how we currently move things, from booking to delivery,” he says. “It’s a sort of new world order approach: using technology to not just improve things in the industry but improve things by upending the existing paradigm, by rewriting the rules of the road. … We are looking at building transformational technologies, from instant quote and book features to enabling the movement of fully autonomous shipments to using machine learning and AI to power intelligent sourcing.”

Joel Fierman, president of Fierman Produce Exchange and co-president of the Hunts Point Terminal Produce Co-Operative Association Inc., sees autonomous trucks as “the next big change in the industry.” Companies pioneering the technology include Volvo and Daimler, whose Freightliner Inspiration Truck was the first such vehicle licensed for use in Nevada.

To some, the idea of driverless trucks on U.S. highways is difficult to visualize. But Fierman predicts they will be ubiquitous in five or more years, while acknowledging “a whole lot” has to change before then, of course. “People were scared when they went from horses to cars,” he notes.

“We are now able to be proactive rather than reactive. We are able to correct problems before they become a problem.”

Stefanie Katzman, executive manager at S. Katzman Produce, agrees: “It’s only scary to us because it’s the unknown.” As a fourth generation family member, Katzman is quick to embrace innovation. Today, she sees relay trucking as a compelling option for moving produce cross-country. As a driver completes a leg of the journey, the next driver is waiting to move the load forward. The process is repeated until the produce arrives at the Hunts Point Market.

“With relaying, the truck never stops. Any thing we can do to speed up the process, we’re going to try to do,” she says. “And there are a lot of benefits to the drivers. They’re maybe only away from their families for two to three days, tops.”

Innovations in real-time traceability and visibility are powering change and growth at Target Interstate Systems Inc., a third-party transportation and logistics company headquartered at the market. “We are now able to see all of our loads on the road in real time at any time,” Paul Kazan, president, asserts.

“For a long time we have had the ability to trace and track the assets (the truck/trailer) of a carrier. Traditionally this tracking platform was the domain of hard-wired satellite tracking hardware such as Qualcomm. These devices are able to track the GPS location as well as the engine speed, oil pressure and braking among other features. … Recently, we have devices that perform similarly to the Qualcomm-style of equipment but now use tablets.

“These iPads are connected to the truck’s J-bus and can give similar data as the satellite devices but use a cellular platform in conjunction with the GPS capabilities of the tablets to transmit the data,” says Kazan

“We have a new crop of companies that are providing the tracking and location services of the driver’s cell phone, since it was mandated that the cellular carriers provide a GPS component to their phones and services for 911 emergencies. Now we can track the drivers’ cell phones with their permission. We use GPS and cellular triangulation which measures the signal strength between cell towers to determine the location of the device,” he says.

Kazan notes customers have rapidly accepted these and other technologies, and in many cases they have become requirements.

“In our industry this information makes for more efficient and better business for all involved. Customers know where their loads are. This helps them in their marketing and distribution, knowing exactly where and when a load is available — no more guessing and relying on a driver or dispatcher’s word as to where our freight is,” he says.

These technologies are also critical as the Food Safety Modernization Act rules are implemented. “We now have the ability to match the bigger fleets in providing real-time information on the temperature, humidity and daylight in the trailer at all times,” says Kazan. “New data recorders have a cellphone component integrated with the temperature, humidity and light sensors. This device will transmit in real time exactly what is happening inside the trailer. If there is an issue during the trip we have alerts set up to notify the carrier, the driver, and us. We are now able to be proactive rather than reactive. We are able to correct problems before they become a problem.”

Evan Kazan, director of business development and a member of the second generation at Target, which was founded in 1981, asserts, “One of our customers has seen their temperature-related claims drop to 0 percent with our programs.  And we have more advanced programs coming soon.”

As to that future, Paul Kazan says it will center on “the seamless integration of customer, broker and carrier systems in conjunction with the new abilities and capabilities of tracing and tracking produce in transit to help us achieve 100 percent visibility in the cold supply chain.”

Loadsmart’s forward-looking assumptions are based on the “clear downturn tendency in freight brokerage margins,” according to Diego Urrutia, chief commercial officer. “As they continue to shrink, the historical value proposition of freight brokers — selling and pricing each load and finding its truck — will decline heavily. Soon, brokers won’t need thousands of employees to power their operations; instead, new technologies like machine learning and artificial intelligence, ubiquitous data sharing, more secure and available chain of ownership (i.e. via blockchain technology) and real-time, over-the-air telematics will serve as potent force multipliers. All of this will dramatically reduce the actual cost of brokering freight and increase consolidation of small- and medium-sized brokers,” he predicts.

“In the long run, things will change more dramatically,” says Urrutia. “Several states will clear autonomous trucks for specific lanes (hub-to-hub). Carrier operational costs will drop significantly and drivers may move from carrier-based to warehouse-based. Huge consolidation on the carrier side will probably follow. Small companies will likely struggle to compete in this new environment. They will be displaced, swallowed up, or put out of business by large enterprises with massive fleets of autonomous vehicles, where few carriers will be moving a very large portion of the total full trailer load (FTL) shipments. The exact role original equipment manufacturers (OEMs) will play in creating this new trucking reality is, for the moment, less clear, but it will likely be important as they too want to become software and service providers. Some big enterprise shippers will end up running their own autonomous trucks fleet, but most companies will rely on third party autonomous truck providers,” says Urrutia.