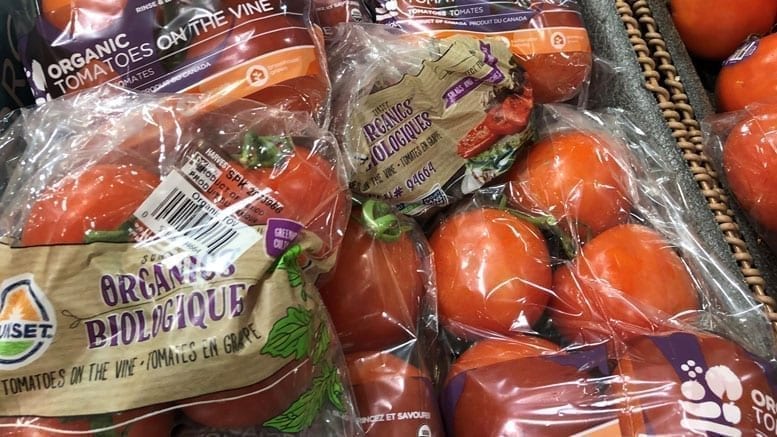 A veritable cornucopia of tomato varieties has emerged on store shelves in the past decade as consumers and retailers alike embrace diversity to liven up the produce section. Organic tomatoes are no exception, piggybacking off this growth as well as rising demand for organically grown produce.

Growers are optimistic with snacking varieties such as grape and cherry tomatoes leading the charge along with TOV (tomatoes on the vine), while plantings have been taken up a notch for organic Romas and Beefsteak.

“The organic tomato category continues to grow and new specialty varieties have no doubt fueled that growth,” says Aaron Brookes, director sales & marketing at Jacobs Farm Del Cabo in Pescadero, CA. “We farm organic cherry tomatoes, are expanding open field and protected supply, and are keeping up with increasing demand.”

“Currently consumers are demanding high-flavor snacking tomatoes most over other varieties, and taste is becoming the most coveted factor in overall product development,” says Jaramillo. “If we can grow a great tasting tomato, we know that it will sell, and we will create value for our customer base.”

“For example, we have had a great reception to our snacking and specialty tomatoes including our Kaleidos, a four-color tomato medley, and our cherry on the vine due to their outstanding flavor, aesthetic appeal and consistent quality,” she adds, mentioning plans to expand these offerings.

Wholesum currently grows its tomatoes in Mexico (Sonora and Sinaloa) and the United States, but the company is currently expanding its Arizona greenhouses to bring more production north of the border. Its first harvest from a new ‘Ultra-Clima’ high-tech greenhouse was marketed last November.

Another tomato company with operations close to the border is Kingdom Fresh Produce of Donna, TX, which sources Mexican-grown tomatoes for the U.S. market. General manager Jaime Garcia says retailers have made a big push to get organic tomatoes on the shelves, and his company now has around 12 percent of its supply organically certified.

“Our focus of growing on the organic side is to expand a little bit more on the Romas and the Grapes a little bit, but the next item we will be bringing will be organic Beef tomatoes,” he says. “We see the growth on organic Romas because, in Texas, for example, where there’s a lot of consumption of Romas, people are starting to buy them to create organic salsas or homemade pastas with organic tomato sauce.”

“If you go up to the Northeast, you’ll be able to sell more organic TOVs (tomatoes on the vine) and organic Beefsteak.”

However, tastes between regions might be converging. Rick Feighery, vice president at Procacci Brothers Sales Corp in Philadelphia – one of the nation’s largest fresh tomato distributors — is seeing increased momentum for Romas.

“We are definitely seeing an increase in Roma demand, consumption and interest, especially on the conventional side, and it is following suit on the organic side,” he says. “That’s from Hispanic households, but also the flavor profile of Romas is getting better and better, and consumers are taking that in place of vine-ripe tomato.

Around 10 percent of Procacci’s tomatoes are organic, with Romas coming in third behind Grapes and organic Vine-ripened. Feighery emphasizes there’s no real existence of the ‘Gas-green organic tomato.’

Helen Aquino, director of brand marketing and communication at Village Farms in Orlando, FL, explains demand for organic tomatoes has been growing with the category making up approximately five percent of overall tomato sales.

“The most popular varieties continue to be Grape, TOV, and Beefsteak,” she says. “Village Farms recently began offering our unique and exclusive Heavenly Villagio Marzano and Maverick Mix varieties of tomato as organic.”

For Aaron Quon, executive director of the greenhouse category at Oppy in Vancouver, BC, the range of organic tomato types is evolving to mirror conventional offerings.

“Organic tomato demand is growing quickly year-on-year. New production is being cultivated to help keep pace,” says Quon, whose company is the exclusive marketer of BC greenhouse-grown TOVs marketed under the OriginO brand. “While our core organic tomato item is the TOV, we are seeing a surge of specialties like organic Grape and Heirloom tomatoes emerging.”

“Oppy aspires to be a year-round organic tomato marketer in the future by seeking new production areas.”

Aaron Brookes of Jacobs Farm Del Cabo says significant growth in the category has led to many growers investing in organic supply, most notably hydroponic.

“This has led to periodic oversupply despite growing demand,” says Brookes, who sees this condition, combined with a shrinking labor supply and the shift to national retailing, as a challenge but also an opportunity to “innovate, differentiate, and deliver.”

Anthony Otto, sales manager for Richmond, VA-based Globalmex International, parent company for Magic Sun, says cost can be a factor. “There is a greater cost and risk for growers to produce organic varieties, so you typically see the organic versions of items introduced 2-3 years after the conventional items are established.”

Otto says the company still sees a bright future for organic tomatoes but keeps a sharp eye on volumes and trends. “We still expect about 8-10% growth on organics, and we are increasing our crop production to match.  Last year, we added organic beefsteak, and this year we added organic grape tomatoes. The challenge is to have a consistent outlet, because the organic demand is less elastic,” he says, adding, “There are fewer options to move organics if you have an influx of product. Our wholesale and retail customers have been great partners in this effort, and together we are able to increase the availability or organics to the consumer.”

Quon concurs cost is a factor and says greenhouse organic tomato production in the United States and Canada is typically two times the cost of growing conventionally.

“The energy cost is the same, but inputs like fertilizer are considerably more expensive,” he says. “The price in the store can be 50 – 100 % higher than conventional, but we are starting to see that gap decreasing grower cost efficiencies are realized.”

Quon notes some retailers have been cultivating demand for organic tomatoes by modifying their margins despite the higher cost of the product.

“While the cost of organic tomatoes to the retailer could be twice as high as conventional, some will price them just a small proportion higher, encouraging shoppers to trade up from conventional to organic,” he says.

“But when organic tomatoes are put on special, retailers have the opportunity to draw more shoppers to the category with an attractive price and perhaps an experience that will lead to repeat organic tomato sales,” he says.

Both Garcia of Kingdom Fresh and Feighery of Procacci Brothers think any promotions for organic tomatoes should be done at different times to the conventional.

“I don’t think they’ll put the conventional on an ad at the same time as the organics because the organics will probably be left behind,” says Garcia.

“We see some retailers that try to promote organic at the same time as the conventional, but that doesn’t ultimately drive demand — it’s really a separate item, it should be treated separately,” says Feighery.

The Procacci executive says he’d prefer to see a well-designed organic ad and a good placement that isn’t going to compete with the conventional counterpart.

“Looking to increase some cross-over sales with a customer who might not have otherwise bought organic but does because it’s at an aggressive price point… there’s nothing wrong with that,” says Feighery.

Whilst mixed or separated systems can both be successful, most purveyors of organic tomatoes advocate a separate section for the category. Nonetheless, Feighery says a segregated organic section needs to be consistent with a storewide design and not just limited to the produce aisle.

From a merchandising perspective, Jaramillo of Wholesum Harvest says packaging is what catches the eye of retailers as they introduce a larger repertoire of organic tomatoes.

“With that in mind, we are putting in a lot of effort to explore innovative, sustainable and merchandising-friendly packaging options that are appealing to retailers and consumers as well,” she says. The most successful displays are those that incorporate other organic products that can be cross-promoted with ours.”

“We also find it very effective when retailers use signage and labels to identify organic sections.”

Garcia points to another trend that is also being seen in other produce categories like berries, whereby consumers who are interested in organics are also taking other environmental issues like reducing plastic usage.

“Through our webpage and feedback that we get, the consumers have asked us not to make them choose between buying organics and buying plastic,” he says. “So, we are now packing organic grape tomatoes in a compostable tray where we have materials that are biodegradable, and that’s been a really strong tool for us to push this into other markets.”

“The buyer of organic is also the one that is more concerned about the earth and Mother Nature, so they are more in tune with these new changes of less plastic consumption.”

Jaramillo says Millennial consumers, who are the most active seekers of organic items, are driving the trend.

“In the next ten years, 80 percent of Millennials will be moms or dads,” she says. “For new parents, values and priorities shift, placing a high value on family health and opting for the safest options without sacrificing quality and flavor.”

Feighery says college towns tend to do a bit better than other areas for organic tomato sales, but there has also been solid sell-through in a lot of areas that “don’t necessarily match what you would assume from a demographic or socio-economic area.”

“It’s not only the households with the higher disposable income,” he says. “We’re seeing it in all areas.”

Feighery adds a lot of growth for organic tomatoes is actually coming from new markets.

“We’re still seeing growth of a pushable amount, but for stores that have a mature offering we’re not seeing the double or triple-digit increases that we did five or 10 years ago,” he says.

“In the past, our organic tomato sales were strongest on the West Coast of North America, centered around Vancouver, Seattle, Portland, San Francisco and Los Angeles,” says Quon of Oppy. “Now, demand is rising in the eastern side of the continent. We anticipate that it will become evenly spread in time.”