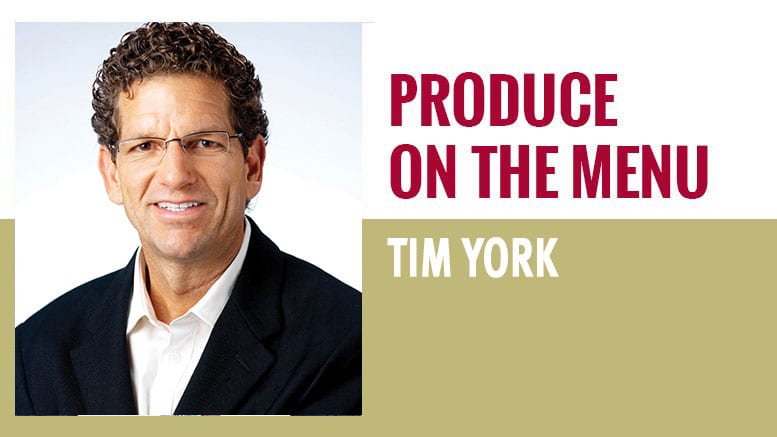 What will the next generation of restaurant diners request or demand? Campus dining professionals have insights that are influencing the restaurant industry’s focus on the future.

Produce is perfectly positioned to take center stage and be a powerful player.

Today’s on-trend chefs are constantly challenging themselves to develop new plant-forward dishes that meet the myriad wants and needs customers have in mind when choosing where to eat, making this year’s Markon Chef Summit the perfect backdrop to learn, collaborate and innovate with fellow chefs from across the United States and Canada.

This was Markon‘s fifth, and best, Chef Summit to date. Held in Monterey, CA, this past July, the conference brought together 26 chefs from Markon’s seven foodservice members (Ben E. Keith Foods, Gordon Food Service, Gordon Food Service Canada, Maines Paper & Food Service, Nicholas & Company, Reinhart Foodservice, and Shamrock Foods Company), as well as several of their foodservice operator customer chefs. The group got out into the fields to see how produce is actually grown and harvested, brainstormed with each other about industry challenges and trends, and connected directly with suppliers and growers about what’s new in produce innovation and products.

After a first day jam-packed with educational gems, the chefs headed out to the Rancho Cielo Drummond Culinary Academy to take part in some friendly competition. First up was the blended burger recipe contest held in partnership with The Mushroom Council. The Mushroom Council is a sponsor of the James Beard Foundation’s Blended Burger Project and partnered with Markon to challenge chefs to create new blended burgers that contain at least 30% mushrooms. The chefs’ recipes were submitted prior to the Summit, enabling the group to taste test the top four recipes for lunch. Summit attendees voted Darci Kropp, chef of Cape Canaveral, FL-based Darci’s Bacon Blues, as the winner for her Bacon Blues Burger. Kropp took home a cash prize for her blended burger that featured ground chuck blended with Florida-grown Monterey mushrooms and cherries, topped with arugula, Brie, jalapeno bacon, and a spicy cherry ketchup, all served on a brioche bun.

“We couldn’t be happier with our partnership with Markon around the Blended Burger — the chefs were incredibly creative, and the burgers were amazing. Blending, which combines 70% meat with 30% mushrooms, has become a part of our culinary culture as this plant-forward approach is appearing on more menus,” says Steve Solomon, menu strategist for The Mushroom Council. “Consumers view blending as a better way to enjoy iconic foods like burgers without sacrificing flavor. Markon has embraced this blend concept with their distributors. They are a force in the industry, and their partnership is helping bring chefs new opportunities.”

After lunch the chefs geared up for another great culinary contest, the Markon Green Box Challenge. The group was separated into three teams to develop recipes featuring fresh produce from Markon’s platinum sponsors Church Brothers, Ippolito Produce and Taylor Farms, as well as a full pantry of ingredients ranging from herbs and spices, to seafood, to global sauces and a variety of cheeses.

The winning recipe was a scallop and shrimp lettuce bisque, featuring Markon’s Ready-Set-Serve Heritage Salad Blend, which is a mix of colorful lettuces blended together and topped with skillet-roasted shrimp and scallops, red oak pesto and lolla rosa oil. It was developed by David Cunningham, center of plate sales specialist and culinary consultant with Reinhart Foodservice, and Jesse Edmunds, owner and chef with Seven Hills Hospitality Group.

“The Markon Chef Summit continues to be one of the most enjoyable culinary journeys of the year,” notes Sam Blackburn, executive chef with Sodexo. “From getting to experience Markon’s ‘boots on the ground’ and spending one-on-one time with the students at Rancho Cielo, to working together to create new culinary masterpieces, Markon has found a unique and special way to highlight the important role produce plays on menus. Markon’s Chef Summit is an eye-opening experience.”

Tim York is the president of Markon Cooperative, which consists of seven independent, broadline foodservice companies in the U.S. and Canada. He started working in the produce industry over 35 years ago at H. Hall & Company, a grower/shipper of strawberries and mixed vegetables. He has held numerous committee and task force positions, including Member, USDA Fruit and Vegetable Industry Advisory Council; Chairman of the Produce Marketing Association (2002); Director of the PMA; Chairman of PMA’s Foodservice Division; Chairman, Center for Produce Safety Advisory Board; and is a founding member of the Stewardship Index for Specialty Crops.