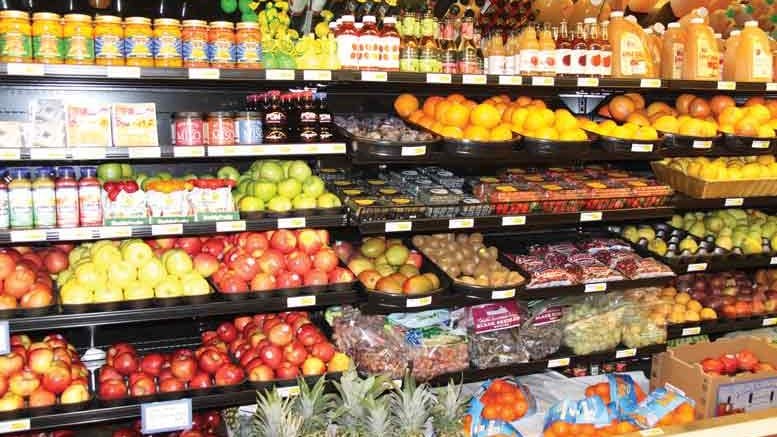 Fresh produce is a small but important part of McGonigle’s Market, a neighborhood grocery store in the heart of the Kansas City metropolitan area.

The small one-store operation in the Ward Parkway neighborhood on the Missouri side of the metropolis has been providing high quality meats and other perishables since 1951. It’s considered a Kansas City staple for meat.

Produce is sold in the back corner of the store, on the building’s northeast side, opposite the fresh meat and deli areas. The meat department employs seven full-time meat cutters who process everything by hand. The produce department occupies 450 square feet of the store’s 5,000 total square feet. McGonigle’s sells 312 stock-keeping units of produce.

The neighborhood is considered urban metro, featuring more of a midtown feel. The neighborhood market draws customers living in the area that consider it their store. They walk there to shop or visit because it’s closest to them.

The nation’s heartland is an adequate descriptor of the Kansas City area. The cosmopolitan city, the 30th largest U.S. metropolitan area, is easy to traverse and never far from area farming operations of cattle, wheat, soybeans and field corn. One can travel to almost anywhere in the metro area within 20 minutes, and within an hour of any part of the metro, be in the country.

Located on West 79 Street, McGonigle’s is at the intersection of 79th and Ward Parkway. Ward Parkway winds and meanders from the city’s Country Club Plaza south to Wornall Avenue, a handful of blocks to the east of the store. McGonigle’s is a block away from State Line, a major north-south artery and not far from 75th and 86th avenues, major east-west routes. “We are at a nice crossroads,” says Chris Doering, general manager. “We have all these major commuter lines through the middle of the city.”

Doering says Kansas City has long tried to shed itself of its reputation as a “cow town.” There’s a misconception that cattle walk the streets of the city while its residents wear cowboy boots and hats. Many first-time shoppers possess an image of dead cattle hanging from the ceiling and aren’t prepared to see that the operation is like a regular store and carries fresh produce, he says.

The produce department is key to McGonigle’s offerings. Responsible for about 7 percent of total sales, the produce section is critical to supplying customers the foods they need to prepare complete meals after purchasing the store’s fine meats. “We always view produce as our strong point,” says Doering. It complements the store’s other products, including fresh meats, seafood and deli. “We don’t have everything to get you through life, but we have everything you need for dinner,” is the store’s motto.

Although produce is important, it’s mostly a break-even situation, says Doering. The category is to provide shoppers what they need to complete meals. “We don’t want people to have to go elsewhere because we didn’t have what they needed,” he says. Other major retail competitors, including Hy-Vee and Hen House, operate stores close by. 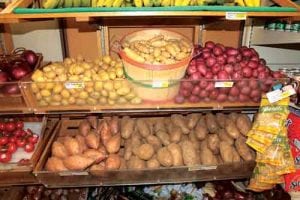 Trader Joe’s opened its first stores in the Kansas City area in 2011, within eight blocks of McGonigle’s, and was first viewed as a threat, says Doering. However, McGonigle’s gained new customers as shoppers from other parts of the metro area passed McGonigle’s while driving to the new store and decided to visit.

“We always focus on doing what we need to do and try to do the best we can,” says Doering. “We just try to get it done without getting into any competition with everyone else.”
The staple produce items are the leading sellers. Asparagus and potatoes are popular. As asparagus is the go-to steak accompaniment, Doering estimates the store sells more asparagus on a per-customer basis than any other store in the city. Other popular fruits and vegetables include onions, lemons, limes, lettuce and avocados.

The store is run by the second generation of the family. All the McGonigle children at one time worked in the store.

Local produce is also regularly promoted as the store allows the growers, including Cobinsteinz Farms, to run farm stand operations in the parking lot. Rick Simpson sells fresh Morel mushrooms in the parking lot in late February and early March. McGonigle’s also sends pickup trucks to area cornfields near Lawrence, KS, and Leavenworth, KS, where growers dump rows of corn into the trucks. After covering with a tarp, the corn is later sold out of the bed of the truck in the store’s parking lot.

The McGonigle’s food business trace to 1882, when the Burnett Meat Co., part of the McGonigle’s family relationship, began cutting a strip steak. The steak became known as the Kansas City Strip.

In 1951, William “Bill” McGonigle, a World War II bomber pilot, was starting his family and visiting local grocery stores through his job as a food salesman. Martin’s Grocery was one of his customers. When the store’s owner told McGonigle about his plans to relocate the store to the new suburb of Leawood, KS, McGonigle purchased the business.

During the 1960s, when competition from larger supermarkets began to hurt neighborhood grocery sales, McGonigle decided to differentiate his store by specializing in only the highest quality meats and perishables. In 1971, he bought out a drug store, which at the time was sharing space in the McGonigle’s building.

The store is run by the second generation of the family. All the McGonigle children at one time worked in the store. Joanie McGonigle Weber, Bill McGonigle’s youngest daughter, runs accounting and is a business partner with Mike McGonigle. Her son, Michael Wiltrout, is head meat cutter. Deli manager Randy Ross, whose father was friends with Bill McGonigle, is also a partner.

During the late 1970s, Doering was high school friends with Mike McGonigle, whom he’d meet at the store to hang out with on Friday nights. Doering, who once worked for Osco Drug, began working full-time at the store in 2004 after working during some holiday seasons as a teenager.

The store always has carried produce, but the selection was much smaller in the past. During a 2006 remodel, McGonigle’s doubled the produce department’s sales space and updated the produce display.

Doering considers produce a store cornerstone. “We can’t take it for granted that we will just sell the meat,” he says. “Most of our careers here are based on the idea of helping put peoples’ meals on tables and providing food for family meals. Why would we not want to have fresh fruits and vegetables for them, the items they need?”

The store promotes produce in weekly ads and finds Facebook a good way to promote new items or seasonal availability. The store communicates with its 10,000 Facebook fans and via a large dedicated email list, which alerts shoppers about the availability of seasonal items, such as fresh Morel mushrooms. “Because someone likes shopping with you now, we can’t take for granted that they will stick with you forever, so we must reach out to new people,” says Doering.

Like with its meats, produce quality is critical. “Because we are a small store, we live and die by what we buy,” says Doering. “We own the case.”